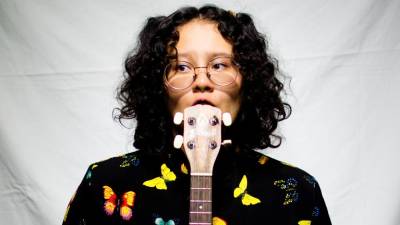 IF YOU saw 24-year-old Hannan Azlan standing in front of a crowd with her ukulele, you would not be able to guess that she was really a stand-up comedian. Yet, she is, and a bona fide one at that.

With a background in theatre despite never having attended university, Hannan is one of the fastest rising stars in both the local and international comedy scene. Within six months of diving into stand-up comedy, she made her debut on Astro. She was also featured at the Singapore Comedy Fringe 2016, and is currently the youngest and only female winner of the Hong Kong International Comedy Competition.

Hannan’s latest show was on Sept 11 and 12, at The Joke Factory in Publika.

How did you find yourself moving towards stand-up comedy?

“I started stand-up because I fell in love with a comedian whom I later broke up with via fax but it’s okay; today he’s still my best friend (but I’m not his best friend).

“If you review my childhood – depression, loner-ism, bullied by students and teachers, known as ‘too much’ by most people – it makes sense that I would do this.

“How do I feel having spent the majority of my teenage years in a battle with depression? I mean, it made me who I am today.

“Sometimes I wish I had a more ‘normal’ experience, but I think without my dark days, things wouldn’t have happened the way they had.

“When I started stand-up, it got me hooked. I just couldn’t stop. I went out of my way to just do as much of it as I could. I was obsessed.”

You’ve had a meteoric rise in the local and overseas comedy scene over the past five years, even taking you abroad. What did you learn from the experience of performing stand-up overseas compared to around the region?

“It’s been a wild ride. To be completely honest, I did not expect or plan anything that has happened in my career.

“I’ve just put in the work (gigging non-stop), been at the right place at the right time, and received overwhelming support from audiences and people in the industry.

“While I was abroad, I learnt that I was very Malaysian. Every night I fantasised about air kelapa and thosai masala. You know what they drink in [Western] countries? Bottled ‘coconut water’!

“In general, I found that Australian and British crowds are louder and rowdier than Asian crowds. Asian crowds are way more polite, and sometimes more shy. I also learnt that white people love to heckle. Sometimes while they’re drunk, sometimes when they’re not drunk.”

Has your brand of irreverent, naughty humour always landed, especially with locals? And how do you pick the material you will perform, or do you play it by ear depending on where you’re performing?

“Local audiences are phenomenal. We are so diverse. We are multicultural, multi-lingual; it’s hot. Most people love my ‘lil skirts and naughty/gross humour!

“Of course, there are some people who don’t appreciate my act, but that’s fine too. Humour is subjective. Not everyone will love you, and that’s okay.

“Generally speaking, I have a set list, but I also love to riff. I have done sets with 100% improv. Before I started stand-up, that was my ‘thing’, making up songs on the spot. Sometimes they’re serious, sometimes silly.”

What are the hurdles you have faced, or still face, as a comic in a country such as ours?

“Most people are nice. Once in a while you meet someone who isn’t so nice. They start rumours about you, they try to put you down.

“Then your friend sends you a video of people saying very nice things about you, and who’s in the background? That guy, arms folded.

“You realise that with that one person who wants you to feel small there are 666 people who love you and want you to be the best you can be.

“It’s up to you to choose who you focus your time and energy on.”

There are those who say you’ve paved the way for more women to enter the local comedy scene in a way that hasn’t been done before. To what extent would you agree with that sentiment?

“Wow, that’s a big question. All I can say is when I meet someone who tells me they want to try stand-up, my answer is always – do it. If you want to do it, do it.

“It’s going to be hard and scary and sometimes painful, but when it goes well nothing will ever top that feeling – until you have kids probably.

“If you have this little niggling [feeling] inside you that wants to try it – do it. And if you’re not a straight guy, please, please do it – we need to hear more voices like yours.”