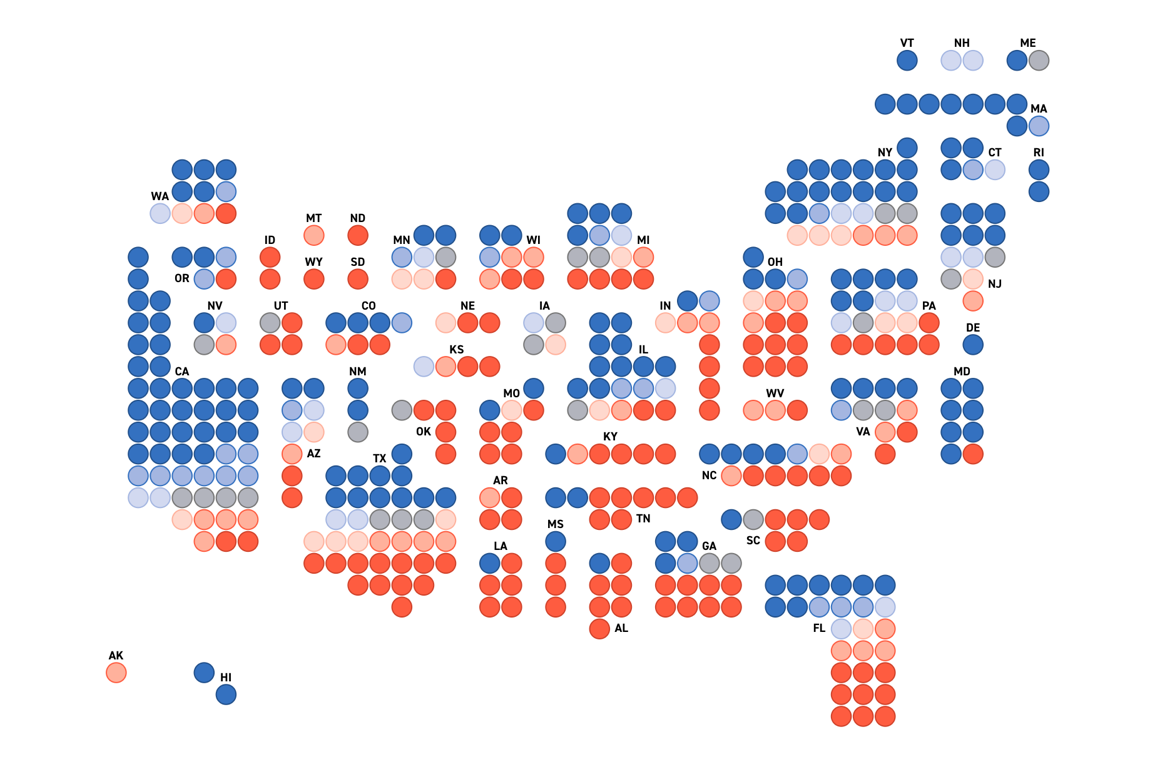 Recruitment flops and lackluster fundraising have weakened Republicans’ chances in over a dozen competitive House districts, leaving them with an increasingly narrow path back to power.

Though GOP strategists feel confident they will see some gains this cycle, the latest fundraising reports out last week painted a bleak picture of their odds of netting the 18 seats needed to recapture the House, particularly with campaigning frozen by a global pandemic.

Democrats continue to ride the "green wave" of campaign contributions that propelled them to the majority in the 2018 midterms. Nearly 30 of the most endangered House Democrats have banked $ 2 million or more in their reelection war chests, offering a layer of protection in otherwise challenging districts.

Meanwhile, Republicans have been unable to field strong candidates in key districts in Michigan, New York, Wisconsin and Minnesota that the president carried and the start of primary season has left them hamstrung by weak nominees in some Illinois and California targets.

“Flipping the House is unlikely at this point. You never say never, but unlikely,” said former Rep. Charlie Dent (R-Pa.), a moderate who retired in 2018. “While Republicans have more offensive opportunities than Democrats in House races this cycle, Republicans are playing more defense than they’d like given retirements, especially in Texas.” 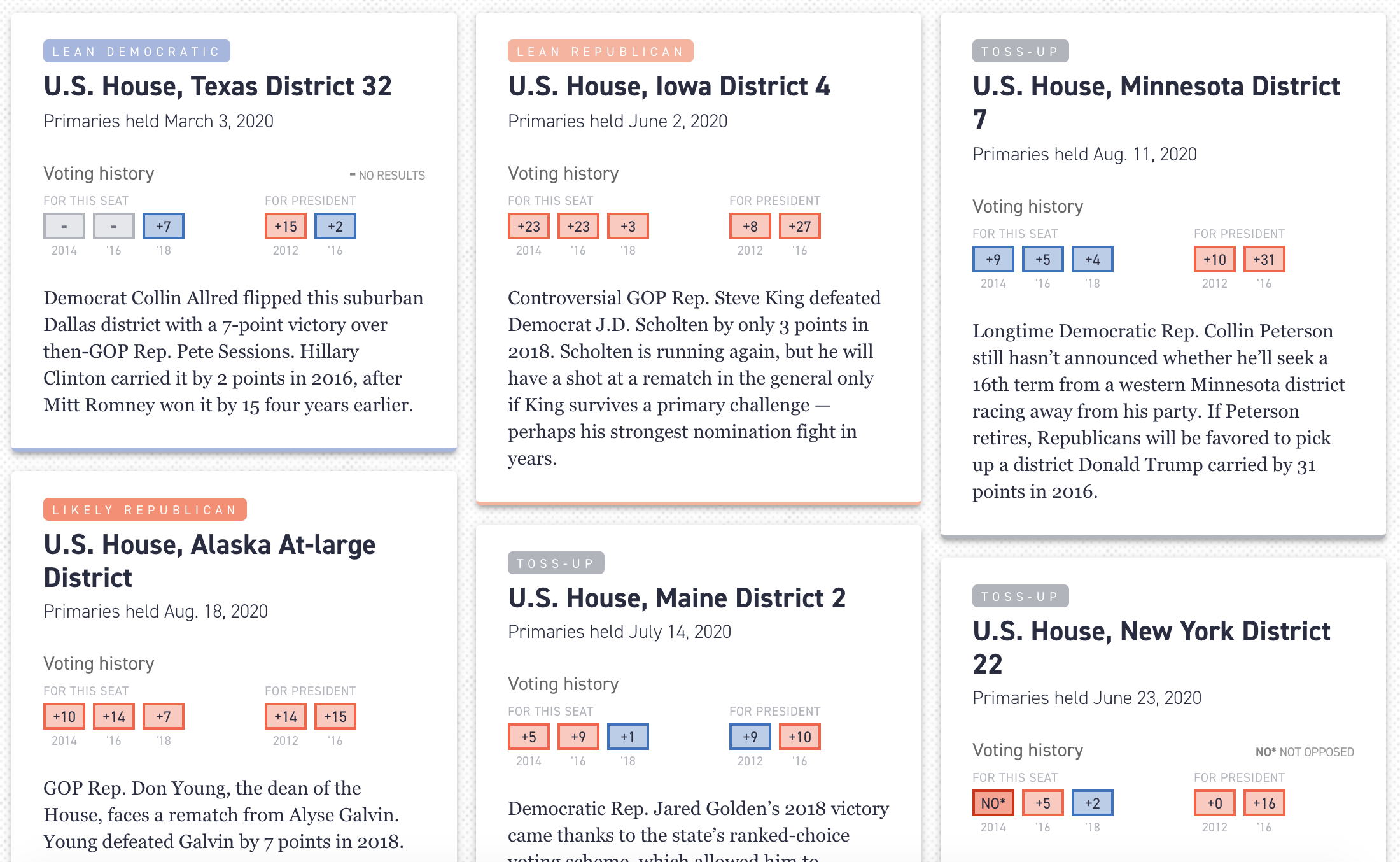 Republicans thus far are struggling to claw back the seats they lost in the midterms, much of it suburban territory that has moved toward Democrats since the election of President Donald Trump in 2016. Many of the seats where Democrats have fortified their majority are in places like suburban Philadelphia, Detroit and Denver — major presidential battlegrounds.

Among the other roadblocks: Redistricting in North Carolina turned two Republican districts into safe Democratic territory. And at least half a dozen open and GOP-held seats are on track to be highly competitive, diverting precious resources to defense.

“It feels like a status quo year in the House,” Dent said.

Even in the midst of the coronavirus outbreak, endangered Democratic incumbents raised exorbitant sums of money in the first three months of the year. Seven of them cleared $ 1 million.

While incumbents typically have a sizable financial advantage, the Democrats’ lead is particularly stark.

Every one of the 42 members in the Democratic Congressional Campaign Committee’s protection program for endangered incumbents had at least $ 1 million in cash on hand at the start of April, and all but two of them have at least twice as much banked as their opponents. Of their challengers, only 11 had more than $ 500,000 saved by the end of March.

House GOP leadership began 2020 by warning candidates that they were facing an all-out fundraising crisis — and while they found some bright spots in the first-quarter filings, officials are still sounding alarms.

“We have success stories, but we still have a long way to go,” National Republican Congressional Committee Chairman Tom Emmer said in a statement. “We don’t need to match the Democrats dollar for dollar, but each and every candidate needs to be able look in the mirror and be able to say they are doing all they can to carry their own weight.”

Spotty fundraising is already nudging more than dozen Democratic-held districts to the outer edges of the playing field.

The GOP’s most glaring recruitment hole is in an Upstate New York seat held by Democratic Rep. Antonio Delgado that is one of a dozen held by Democrats that Trump won with over 50 percent of the vote in 2016.

Republicans have also struggled in other Trump-won districts. Democratic Rep. Angie Craig has no opponent with more than $ 100,000 in the bank vying for her suburban Minneapolis seat. None of the candidates running against Democratic Reps. Ben McAdams (D-Utah) and Matt Cartwright (D-Pa.) has more than $ 300,000 on hand. And all three seats have crowded primaries.

"They have very few candidates who are reaching the goals that they should be reaching — so they have a map on fire, essentially,” said Abby Curran Horrell, the executive director of House Majority PAC, congressional Democrats’ main outside group. “There’s very few places where things look secure." 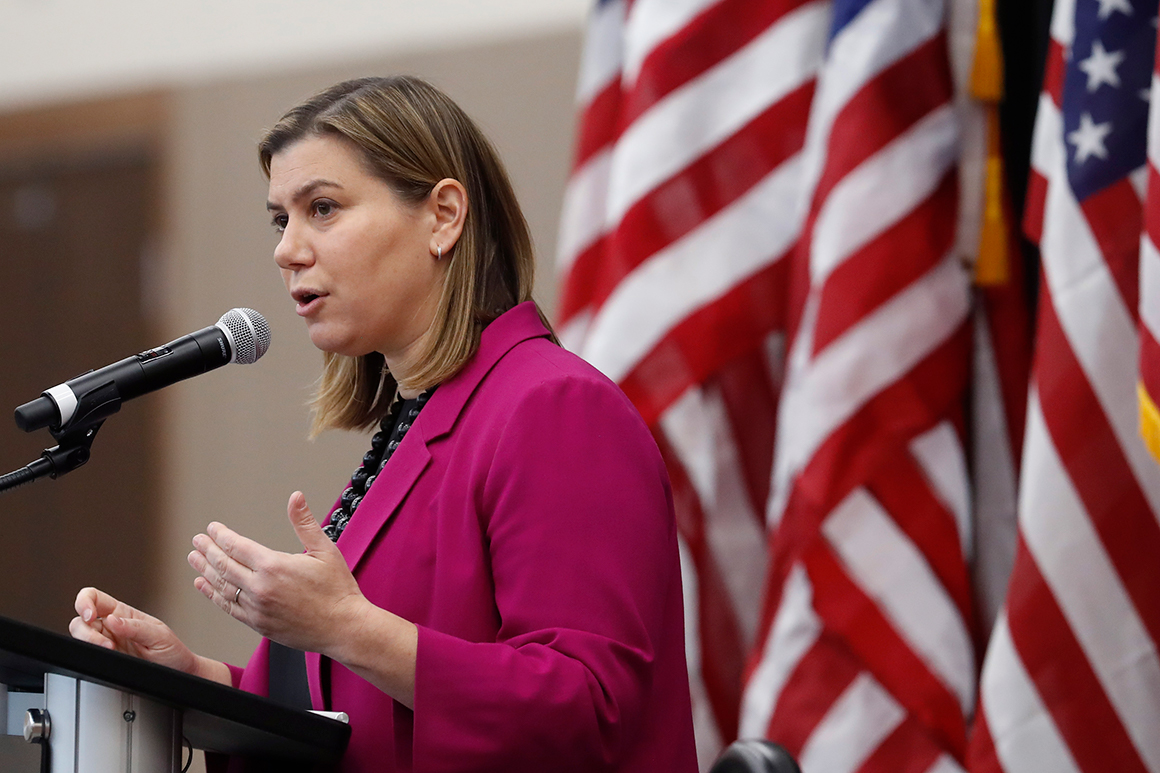 Recruiters have also been stumped in Michigan, a state that will host competitive Senate and presidential contests. Eric Esshaki, a potential challenger to Democratic Rep. Haley Stevens, has said he does not have enough signatures to get on the ballot before Tuesday’s deadline and has resorted to suing the governor. In a neighboring district, Democratic Rep. Elissa Slotkin has $ 3.7 million banked; none of her opponents raised more than $ 50,000 without self-funding.

In California, Democratic Reps. Josh Harder and Katie Porter both have more than 30 times the amount of cash-on-hand as the Republicans who advanced with them from the March all-party primary.

“We needed to put these seats to bed and be done with them in the off year, and that is what we set out to do,” DCCC executive director Lucinda Guinn said.

To the west, in a seat held by Democratic Rep. Lauren Underwood, national Republicans were so eager to block a primary win by GOP state Sen. Jim Oberweis that they dropped over $ 900,000 in attack ads against him. Oberweis, an immigration hardliner who has made unsuccessful runs for the House, Senate and governor’s mansion over the past two decades, narrowly won anyway.

A dairy magnate, Oberweis is prone to self-funding but Underwood has $ 2.3 million on hand.

“There’s an entire super PAC that went in to try to stop Jim Oberweis from becoming the Republican nominee, and now he’s their nominee,” Guinn said. “He’s a perennial loser who Republicans can’t afford to bail out in the Chicago media market.”

Both parties largely agree that a cluster of suburban seats around Denver, Tucson, Minneapolis, Seattle, San Diego and Washington, D.C., that Democrats flipped by wide margins last cycle are not in play because they are trending quickly away from the GOP.

As the battlefield crystallizes, there are roughly 25 Democratic-held seats that are on track to be highly competitive — though that number could change as the national political environment shifts throughout the summer and fall. More than half lie of in districts that Trump carried in 2016, offering the GOP glimmers of hope.

Republicans have landed some impressive and well-funded recruits in some of those districts, but they also face messy primaries in many of their top pickup opportunities. Republicans won’t choose a nominee until June to face Reps. Xochitl Torres Small (D-N.M.), Kendra Horn (D-Okla.) and Joe Cunningham (D-S.C.), who all hold seats Trump carried by double digits. 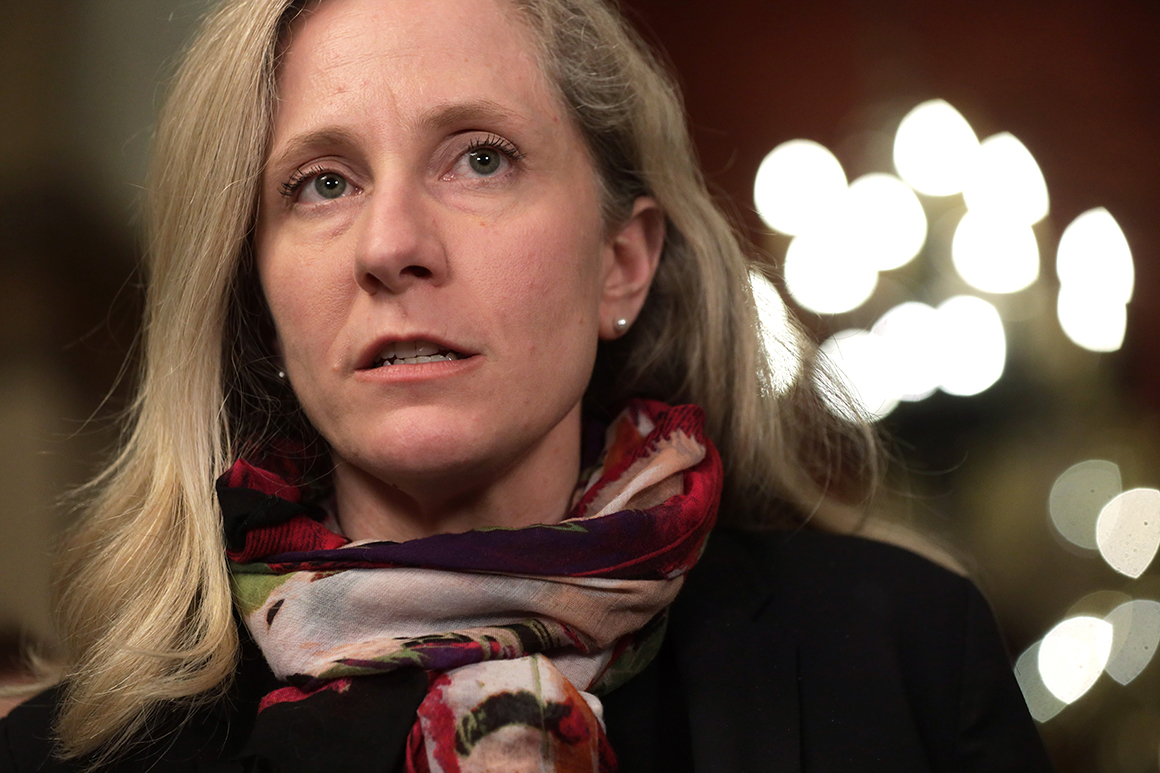 The coronavirus outbreak has upended the GOP primary in Democratic Rep. Abigail Spanberger’s central Virginia seat; officials were forced to postpone the nominating convention set for this week, and the campaigns are in limbo.

National Republicans hope state Del. Nick Freitas emerges as the nominee, in part because the conservative Club for Growth has signaled it will spend heavily to elect him. But the winner is likely to be chosen by delegates in an unpredictable process. Several Republicans are running, but none has more than $ 250,000 in the bank. Spanberger has $ 3.1 million.

Meanwhile, the pandemic is certain to cripple fundraising throughout the summer months, meaning Republicans who empty out their accounts to win primaries could seriously struggle to refill the coffers.

Still, GOP officials insist that House races are highly susceptible to top-of-the-ticket trends, and that races in red-leaning districts could heat up late in the fall as the presidential race tightens, even if they have middling nominees with insufficient cash.

For example, Rep. Jared Golden (D-Maine) has at least 10 times more cash on hand than any of his opponents. But Maine is one of two states that divides electoral votes by congressional district, and national Republicans hope investment by the Trump campaign could help lift Golden’s opponent.

To widen their net, Republicans are also investing heavily in a handful of seats where the president is less popular.

"We’re going to maximize our chances not only in Trump country, but also in a group of swing seats that, on the presidential side, we may ultimately lose by a couple points,” said Dan Conston, the president of the Congressional Leadership Fund, the House GOP’s top super PAC. “But we have recruited uniquely strong candidates that can outrun the top of the ticket."

Among them: Tom Kean Jr., a New Jersey state Senate minority leader and son of a former governor; Michelle Steel, a supervisor in Orange County, Calif.; former Rep. David Valadao (R-Calif.) and Wesley Hunt, an army veteran running in Houston. They are also the rare GOP candidates who raised more than a half a million last quarter.

Yet Republicans’ hopes could rest heavily on the extent to which they have to play defense. Races for GOP-held seats in Texas, Harrisburg and suburban Atlanta will be heavily contested.

Democrats have tried to land well-funded recruits who can force national Republicans to spend to protect otherwise-safe incumbents. While the party has no strong candidate to take GOP Rep. Brian Fitzpatrick in swing Philadelphia seat and is likely to again nominate failed 2018 candidates in New York and Nebraska battlegrounds, it has found formidable contenders in several other districts.

“The nightmare scenario for Republicans is that Democrats have enough money that they can be on offense,” said one veteran GOP consultant. “A lot of that has to do with how much pressure we can put on Democratic incumbents, and so that’s why recruiting failures anywhere are not ideal.”