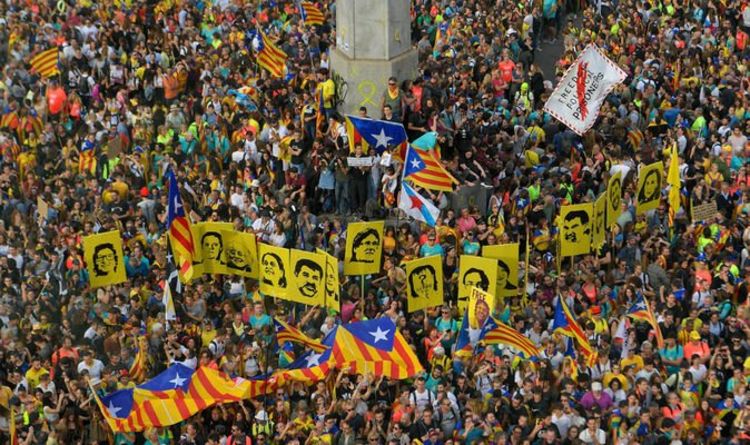 Furious protesters blocked roads in the Spanish city bearing flags and demanding the nine pro-independence leaders jailed for their failed attempt to break free Catalonia from Spanish rule are released. Tens of thousands marched the streets of Barcelona in a move that saw angry protesters clash with police. Images show officers in riot gear with damaged shields and batons carrying away demonstrators in the streets.

Other pictures show protesters scrawling graffiti on landmarks and buildings in a city jam-packed with people.

Gerard Piqué and Ousmane Dembélé of FC Barcelona will not play against Eibar on Saturday, given that they are sanctioned.

However, they had to go to the Sports City on Friday to train with one of the physical trainers, but the general strike in Catalonia has disrupted the plans.

Both the Spanish and French players are not going.

They postponed their training from Friday to Saturday.

Piqué and Dembélé are summoned Saturday morning with physical trainer Edu Pons, three hours before the game in Ipurua.

Piqué, one of the players of Barcelona with more political significance, was one of the first to support Barcelona FC in its statement of rejection of the ruling.

FC Barcelona said in a statement: “FC Barcelona, as one of the leading entities in Catalonia, and in accordance with its historical record, for the defence of freedom of expression and the right to decide, today, after the condemnatory ruling issued by the Supreme Court in relation to the open process against the Catalan civic and political leaders, states that: In the same way that the preventive prison sentence didn’t help to resolve the conflict, neither will the prison sentence given today, because prison is not the solution.

On Monday Spain’s Supreme Court sentenced nine Catalan separatist politicians to jail terms of between nine and 13 years for their role in a failed secession bid, while three others were fined.

Catalonia is a semi-autonomous region in northeastern Spain with a distinct history which dates back some 1,000 years.

In the region’s wealthy district, there are around 7.5 million people who speak their own language, have their own parliament, flag and national anthem.

The region also has its own police force and controls some of its public services.

Catalonia has endeavoured for 40 years to become independent from Spain, but it had its autonomy suspended for around seven months in 2017 by Madrid after a failed independence bid.

Nationalists in the country have said the region sends too much money for poorer parts of Spain, as a result of taxes being governed by Madrid.

Protests have erupted across Spain this week involving thousands of protesters who converged on Barcelona’s airport, as well as blocking a train station and several motorways in Spain’s Catalonia region.

The country is in a state of pandemonium as riot police are firing bullets and used batons at protesters who have rallied up and down the Catalonia region.

Catalonia voted 90 percent for independence in a 2017 referendum.

This was deemed illegal by Spain’s Constitutional Court, sparking fury in the region.