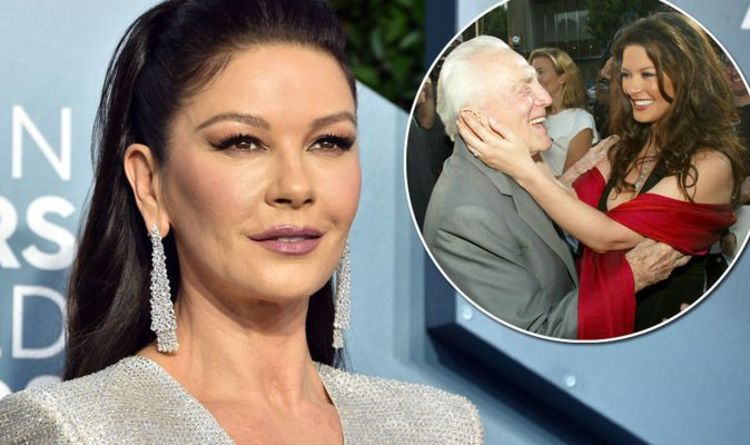 Catherine Zeta Jones, 50, took to social media today to post a touching tribute to her father-in-law Kirk Douglas, who died yesterday at the age of 103.

“Miss you already,” Catherine said online, after her husband Michael Douglas, 75, released a statement to the world following the death of his father.

The late Hollywood actor was best known for his roles in 1960s film Spartacus and received three Best Actor Oscar nominations over his long career, which spanned the golden age of cinema and beyond – one for Champion in 1949, The Bad and the Beautiful in 1952 and Lust for Life in 1956.

Mum-of-two Catherine posted a beautiful black and white picture of the pair on her Instagram account, in view of her 3.2 million followers.

The actress could be seen tenderly planting a kiss on her father-in-law’s cheek in the picture which captured the well-dressed pair at party.

Alongside the image, she wrote: “To my darling Kirk, I shall love you for the rest of my life. I miss you already. Sleep tight…”

Catherine’s husband also shared pictures of his dad online, along with a heartwarming tribute.

Next to four pictures of the legend actor from his heyday and more recently with his family, Michael began: “It is with tremendous sadness that my brothers and I announce that Kirk Douglas left us today at the age of 103.

“To the world, he was a legend, an actor from the golden age of movies who lived well into his golden years…

“But to me and my brothers Joel and Peter he was simply Dad, to Catherine, a wonderful father-in-law, to his grandchildren and great grandchild their loving grandfather, and to his wife Anne, a wonderful husband.”

The proud son signed off his post, by adding: “Let me end with the words I told him on his last birthday and which will always remain true. Dad – I love you so much and I am so proud to be your son.”