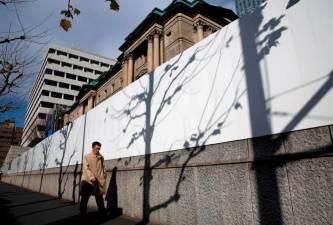 The announcement was unscheduled, signalling the Bank of Japan’s concern that liquidity could dry up. Buying bonds from banks releases cash into the markets.

“We should see more action from central banks because what we need here is a short-term liquidity bridge,” said Mohammed Apabhai, head of Asian trading strategy for Citigroup. “The issue is that if we don’t see that, then this situation risks becoming a more systemic problem.”

Indonesia’s central bank also responded to market jitters, buying 6 trillion rupiah ($ 405.13 million) worth of government bonds in an auction – double its initial target, an official told Reuters, who said the bank was prepared to hold another auction if needed.

Earlier on Friday, Australia’s central bank injected an unusually large amount of cash into the financial system. South Korea’s central bank said it could inject liquidity if needed and that its board was discussing whether to hold a rare inter-meeting review that could cut interest rates.

The cost of raising U.S. dollars in South Korea through won-dollar swaps surged to a six-year high on Friday as demand for the world’s reserve currency soared among brokerages in Seoul.

The central bank moves came after the U.S. Federal Reserve on Thursday surprised markets by injecting $ 500 billion into the U.S. banking system, and pledged to add a further $ 1 trillion.

The unscheduled offer of effectively unlimited dollars came as U.S. stocks plunged nearly 10% in their biggest one-day losses since the 1987 market crash and marked an attempt to avoid the freezing of credit seen during the 2008 global financial crisis.

Earlier on Thursday, the European Central Bank offered banks loans with rates as low as minus-0.75%, below the ECB’s minus-0.5% deposit rate and so essentially a rebate. It also promised to increase its bond purchases, however, it did not cut benchmark interest rates further below zero as investors had expected.

Some companies have begun hoarding cash and drawing down credit lines as they look to balance the need to pay wages and overheads even as their income is hit by drop in everyday activity.

The Bank of Korea has not delivered an inter-meeting rate cut since October 2008 in the depths of the financial markets.

A 25-basis-point cut would take the base rate to 1.00%, the lowest since the BOK adopted the current policy system in 1999.

In Sydney, the Reserve Bank of Australia (RBA) surprised in its daily money market operation by pumping in A$ 8.8 billion ($ 5.52 billion) into the system through repurchase agreements. That was more than twice the amount it had originally intended due to massive bank demand for cash.

The money was loaned for periods ranging from 17 to 95 days, with A$ 5.6 billion going at the longest date.

Several other central banks have also acted to reassure markets.

On Thursday, the Reserve Bank of India said it would provide dollars to the market via currency swaps, with the first such transaction for $ 2 billion, to be held on Monday. The Bank of Canada boosted liquidity by extending its bond buyback programme and pledging to hold more frequent bond exchanges where banks can exchange older bonds for newer, more liquid ones. – Reuters