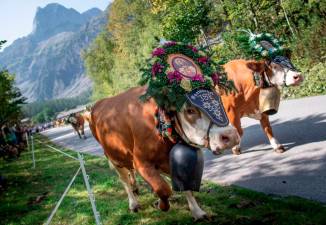 WITH tender care, Sepp Rieser adorns the bulky heads of his reluctant cows with flower wreaths, adds some more fir twigs, and adjusts the large bells around their necks.

“I’ve been doing this since I was a little boy,“ Rieser says of the ancestral tradition in which cattle are decorated for their journey from the high Alpine Gramai pasture in Austria’s western Tyrol state, where they graze all summer long, to the valley below where they’ll spend the harsh winter months.

To Rieser, the festivities surrounding this journey to the village of Pertisau in the Karwendel mountains are as important as his birthday or Christmas.

Images of Jesus and the Virgin Mary feature in the adornments of his 90-strong herd, reflecting the region’s strong Catholic heritage.

But it could soon be a relic of the past: Sweeping economic changes as well as climate change are taking their toll on the landscape and threatening the future of the tradition as well as its bovine stars.

The small-scale farms that dominate Tyrol have become economically unviable, forcing thousands of farmers to pivot to more reliable sources of income.

As a result, more than 25,000 cows have disappeared over the past decade, and with them the pastures they used to graze on, according to figures from the agriculture ministry.

The foundation of life

Within the past two decades, around 1,250 pastures in Tyrol alone have been left to revert to nature, a development that is also affecting other regions of the Alps, from southeastern France through Switzerland, as well as parts of Italy, Germany and Slovenia.

In Tyrol, where hiking in the summer and skiing in the winter are the mainstays of the economy, the impact is particularly distinct, Rieser explains as he puts the finishing touches on his cow’s halter, engraved with his name and three Edelweiss flowers.

Taking the cows to the pastures “is very important, firstly for the cows’ fitness, their longevity and their health, and of course also to maintain the pastures and the entire landscape,“ Rieser tells AFP at an altitude of more than 1,260 metres (4,130 feet), where his herd spends the summer grazing on fragrant meadows.

Cows and mountain pastures, says Rieser, “are the foundation of our lives.”

Without cows, pastures can quickly become overgrown with shrubs and forests, altering the landscape and making it impassible, according to Jasmin Duregger, a climate change expert at Greenpeace Austria.

Meanwhile slippery nard grass has already begun to take over many pastures, increasing the risk of avalanches, says Duregger.

“When pastures become overgrown with shrubs and trees, vital plants are lost as well as rare herbs and flowers,“ he adds.

Climate change is only accelerating this effect.

Gottfried Brunner, who has tended Rieser’s cows for 10 consecutive summers, has been noticing these changes.

“Summers are coming sooner,“ he says while the cattle are guided past an iridescent mountain lake.

The average annual temperature between 1981 and 2010 was 6.9 degrees Celsius (44.4 degrees Fahrenheit) in Austria, but since then, each year has been well above that level.

Last year, the figure rose to 8.5 degrees — 1.6 degrees above the previous median.

“That means we have a prolonged period of vegetation during which more herbs, grass and shrubs can grow,“ which has increased the feed by as much as 20 percent, Duregger says.

“The cows simply can’t keep up with grazing.”

More intense precipitation and sweltering heat waves are among the changes Rieser has noticed.

“Climate change is something we can see today,“ he says sternly.

After treading down the steep mountainside for about one and a half hours, the cows finally arrive in Pertisau, cheered on by hundreds of excited spectators.

Having travelled three hours to join, Karin Polzl beams as the cows amble past.

For the festivities, Polzl has put on a T-shirt with a cow printed on it.

“I love these animals,“ she says, speaking to AFP about the collection of cow figurines at her house.

“I think it’s very sad that this tradition, the cows and pastures are at risk,“ she says.

Like so many here, she hopes that they’ll endure — beyond her glass cabinet. – AFP