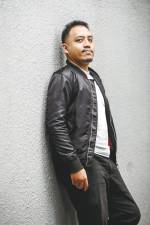 SINCE his debut in the ring four years ago, Double K has been a constant in the Malaysia Pro Wrestling (MyPW) scene.

Despite his heel (bad guy) persona and the many times he has broken the rules, the Retis – as he is also known – is always able to get the crowd to cheer for him. Maybe it is his charisma, or perhaps it is ‘Penyodok’, his signature weapon, a dustpan.

Since surviving a motoring accident a few months ago which forced him to use a cane, Double K (real name Khalidi Khalid) has turned his attention to commentating during wrestling matches. It was at one of these events that I learned that we share the same hobby, building model kits.

Intrigued to know more about the man beyond the squared circle, I invited Double K to meet up at Arab Thai at eCurve, Mutiara Damansara.

Located on the ground floor at the back of the mall, behind some escalators, this establishment is a hidden gem.

Despite its name, Arab Thai is not a restaurant serving fusion food. Instead, its menu is divided into two halves: Arab and Thai.

When we met, Double K no longer needed a cane to walk. “I graduated from using a walker with four legs,to crutches with two legs, to a cane with one leg, and now I am walking on my own,” he said.

The speed of his recovery, to a layman, is astounding.

Double K opened his menu and started scanning the rice dishes. “The office of my day job is located above an Arab restaurant. I smell their fragrant rice almost every day, but I have never been there.

His pick was chicken mandi, a staple of Arab restaurants. This deceptively simple-looking dish from Yemen features spiced rice with chicken cooked in a special oven. It is served with two gravies; one is like curry, while the other is like salsa.

“Should we get hummus?” asked Double K. Hummus is mashed chickpeas blended with different spices, ingredients, and oils, depending on the region of origin or recipe.

We ordered the shawarma hummus, which comes with cut chicken, and malawah, a Yemeni bread and a personal favourite of mine. It is very similar to the Malaysian roti canai.

For drinks, we ordered another one of my favourites, a sharing pot of mint tea.

Of course, the tea is served hot in an ornate teapot, with small cups, and is best with plenty of sugar. At Arab Thai, the tea is unsweetened, but a container of sugar is provided.

“The doctor says I’ll be able to wrestle again in July. I was advised to move around unaided, to retrain my body to move naturally again,” said Double K as he stood up and walked to get his pictures taken for this story while we waited for our food.

Once we were back at our table and the food arrived, we started talking about the recent changes in MyPW.

“We are returning to our indie roots,” explained Double K. The promotion used to pride itself on holding big events every three or four months.

But this year, MyPW is focusing on holding monthly events, with New Moon taking place this Sunday, and Strike Back on April 18.

Since late last year, MyPW has held its matches in the futsal court at Spacerubix, Puchong. “It may be hot for the spectators, but the environment lets us sweat and makes us want to push harder,” he added.

Double K didn’t waste time trying out the hummus while I tore into the malawah.

In my experience, the food at Arab Thai never disappoints. It turns out Double K has always heard of, but had never tried, hummus before. And he discovered that he liked it a lot.

Most pro wrestling fans understand that it is a form of entertainment, albeit an athletic one. Because of this, a lot of naysayers belittle the role of a title-belt holder.

I asked Double K what it means to hold a championship belt.

“The championship belt is a prestige and a privilege to hold,” explained Double K.

“It means that you are the face of the company. It is also a symbol of the company’s appreciation of the hard-working talent and elevates the status of the wrestler”.

As we were finishing our meal, Double K told the story of how he got into building model kits.

“I started with Lego when I was young. In time I wanted to do something more challenging, so one day I took my dad to a hobby shop,” says Double K.

“I am a big fan of mecha, giant robots. And at the time I had never seen a Gundam plastic (Gunpla) model kit before.

“I picked one, and it turned out to be one from the Gundam Wing series, a Heavyarms Gundam. It was my first.”