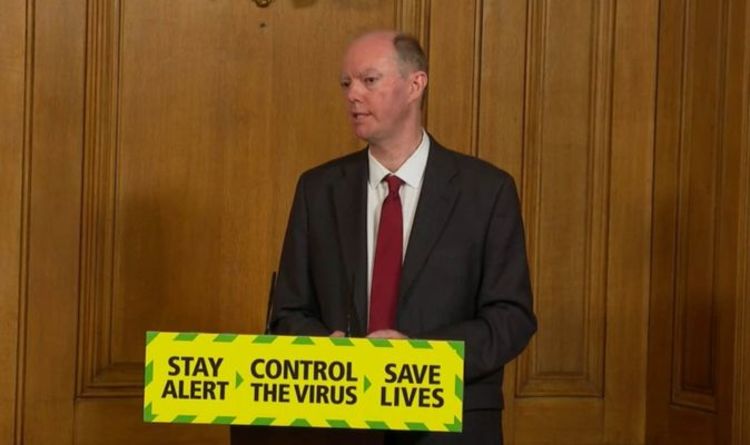 Professor Chris Whitty admitted to the Commons Health Committee that a surge of cases in the colder months was a serious concern. And he was echoed by other experts who warned that the UK will be hit by a second wave if people start behaving as if the virus has gone away. Prof Whitty defended early decisions on lockdown and testing, insisting there was “no huge delay” in taking steps.

In a heated exchange with ex-health secretary and committee chair Jeremy Hunt, he was asked about suggestions that the advisory group Sage had urged the Government to impose a full lockdown a week before it did.

Prof Whitty said: “It wasn’t a one hit – nothing, and then suddenly everything going into lockdown. Multiple steps were taken along the way.

“And if you look at the R and the behaviours, quite a lot of the change that led to R going below one occurred before the 23rd when the full lockdown started.”

He said ministers had followed his advice on the timing of lockdown “with a delay that was no more than you would reasonably expect for what are difficult things to decide”.

The chief medic also faced intense questioning about the decision to abandon widespread community testing and the lack of regular testing for asymptomatic healthcare staff.

Prof Whitty said community testing had been stopped because of limited capacity.

He was not against routine testing of hospital staff but it was not clear how often it should be done. He added: “When there is a surge, if there is a surge in winter, which is a really serious concern, we certainly will need asymptomatic testing among healthcare staff.”

Professor Sir Jeremy Farrar, director of the Wellcome Trust and a Sage member, said: “If we have any sense of complacency or ‘this is behind us’ then we will undoubtedly have a second wave and we could easily be in the same situation again.

“The lockdowns have made an enormous difference to the community transmission. They have done nothing to change the fundamentals of the virus.”

Sir Paul Nurse, chief executive of the Francis Crick Institute research centre, said that “up to 45 percent” of healthcare workers were infected at the peak of the crisis. He said: “It was quite clear that those without symptoms were likely to be transmitting the disease. So this was a real, major failure.”

Professor Sir John Bell of Oxford University told MPs the lack of staff testing was believed to be due to concerns that hospitals would have to send employees home.

He said: “That in my view is not an ethical approach.”

Deputy chief medical office Professor Jonathan Van-Tam said he was “cautiously optimistic” some vaccine might be available before Christmas.