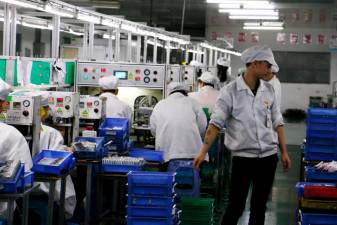 BEIJING: Profits at China’s industrial firms slumped in the first two months of the year to their lowest in at least a decade, with the mining, manufacturing and power sectors all seeing sharp falls, as a virus epidemic battered China’s economy.

Profits earned by Chinese industrial firms in the first two months dropped 38.3% from a year earlier to 410.7 billion yuan ($ 58.15 billion), worsening from a 6.3% fall seen in December last year, the National Bureau of Statistics (NBS) data showed. It marked the steepest decline in data going back to 2010.

The reading combines the results for January and February to exclude distortions caused by the week-long Lunar New Year.

The outbreak escalated just as many businesses were closing for the long holiday break in late January, and widespread restrictions on transportation and personal travel, as well as mass quarantine, delayed their reopening for weeks.

The decline in profits points to lingering trouble for the manufacturing sector, which is wrestling with fallout from the health crisis that has severely hurt output and is expected to halve economic growth in the current quarter compared with the previous three months.

Industrial production and sales declined significantly amid epidemic control efforts, while the costs of labour and depreciation continued to put pressure on companies, a statistics bureau official said in a statement published alongside the data.

An overwhelming majority of industries saw profits decline, it said, from automobiles to chemicals.

The weakness in profits was in line with broader pressures on Chinese factories.

Manufacturing output plummeted at the sharpest pace in three decades in the first two months as the virus outbreak interrupted normal production, while factory gate prices fell more than expected in February and erased the slight recovery in January.

China’s central bank cut the cash that banks must hold as reserves earlier this month for the second time this year, injecting 550 billion yuan to help the economy cushion the impact from the health crisis, following an 800-billion-yuan reserve requirement rate cut in January.

The government has also stepped up fiscal support, including more funding to battle the virus fallout, tax waivers, cuts in social insurance fees and subsidies for firms.