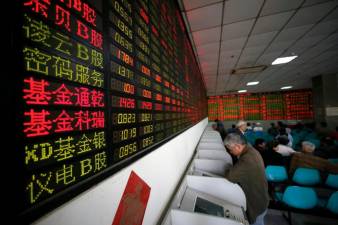 But the bonds fell out of favour as Beijing stepped up a crackdown on local government leverage in 2016 after banning authorities from offering implicit guarantees to LGFVs.

“The economy is a bad shape, so the government needs to step up infrastructure investment,” said Xiaofang Liu, head of research at Shanghai Fengshi Asset Management. “That reduces the LGFVs’ default risks as they’re needed to finance such projects.”

Yields of onshore three-year bonds sold by LGFVs with AA ratings dropped more than 40 basis points on average over the past month, more than the 19 basis-point decline in central government bond yields, according to official data.

Even bonds issued by LGFVs based in virus epicentre Wuhan, including Wuhan Hongshan Urban Construction Investment and Wuhan Real Estate Development and Investment Group, saw their yields plunge. A Wuhan Real Estate bond that matures in April this year saw its yield fall over 50 basis points since February to 2.48%.

Some LGFVs are already getting direct support from Beijing.

The ratings agency added that while the epidemic was negative for the credit quality of the bonds, Beijing’s easing measures and investors’ new preference for LGFV bonds meant they did not immediately face any refinancing risk.

Investors’ renewed enthusiasm for state-backed bonds, however, has come at the expense of private companies, underscoring the challenges Beijing faces in pushing forward with long-term structural reforms including deleveraging its bloated state sector.

The switch to state-backed investments would also raise the cost for non-state borrowers, even as China’s central bank has pumped in liquidity and cut key interest rates as part of its efforts to stem the economic impact of the coronavirus outbreak.

The top brass of LGFVs are “typically names that are strategically important, who will benefit from any government stimulus,” said Avinash Thakur, Barclays’ head of debt origination for Asia Pacific.

But their weaker peers may deserve more caution.

For other types of state-owned companies and financial institutions, “government support is very explicit,” said Owen Gallimore, head of credit strategy at ANZ in Singapore.

“Their access to cheap and liquid funding is revealing. That support is far less certain with LGFVs.”

Some local governments and LGVFs are already sitting on massive amounts of hidden debt, which S&P Global Ratings estiamted in 2018 could be as high as 40 trillion yuan. – Reuters