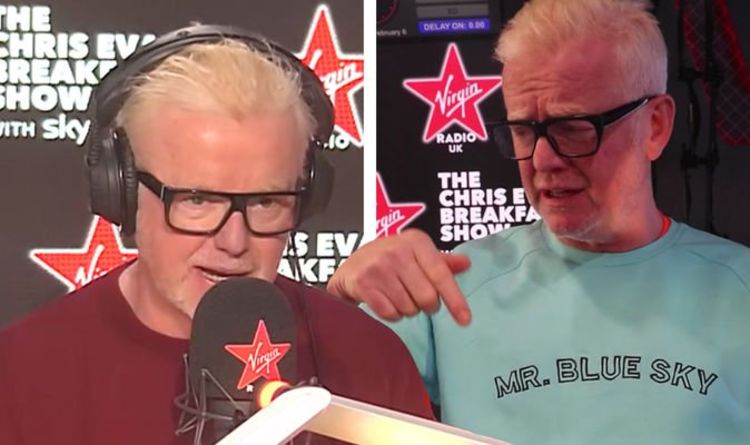 Chris Evans, 53, dropped a bombshell on his co-star Vassos Alexander on Tuesday morning’s show, confessing he “had an issue” with a birthday gift he, Rachel Horne and the rest of the Virgin Radio team had bought him. His colleagues had gotten him a gift made out of brass, a metal material that Chris now revealed “gives him the creeps”.

The admission came about as the pair noticed a brass door handle in Rachel’s front room, as she appeared via video link from her home.

The Virgin Radio star has been broadcasting her news bulletins from the comfort of her house, after one of her children started showing symptoms of coronavirus.

But Chris hasn’t been impressed with her home decor that’s been on display in the background of her video chats, firing sarcastic comments about the wallpaper and now her door handles.

“I’m looking at that door and hoping it was apart of the fixtures and fittings when she bought the house,” Chris said to Vassos.

“Because it’s a brass door handle and it’s a classic, it’s got a slight kink in it.

“I can’t stand brass fixtures and fittings, they give me the creeps!”

After openly admitting he has a hatred of all things brass, he made a brutally honest comment about the birthday gift he received from the team.

“That’s why I had an issue with the knot case you bought me!

“The team know I love knots, so they brought me this sunken frame – this velvet backed, brass plated knot display and it just gave me the creeps, it weirded me right out!” he told listeners, as Vassos chuckled in the background.

He admitted afterwards that he wished he “hadn’t gone there” after his co-star snapped at his rude comment.

After revealing he had gotten into an argument with his wife Natasha, over some unwelcome comment about isolation dinner preparations, he noted he should have thought a bit more before insulting Rachel’s home decor.

“It’s a bit like the wallpaper conversation where I sort of wish I hadn’t gone there!” he hooted, before explaining the rest of the story.

Vassos sighed and said: “You do go to these [lengths],” tutting at Chris, insinuating he brings it on himself.

But the former BBC star hit back: “Rachel, I only commented on your wallpaper because you asked me what I thought of it!”