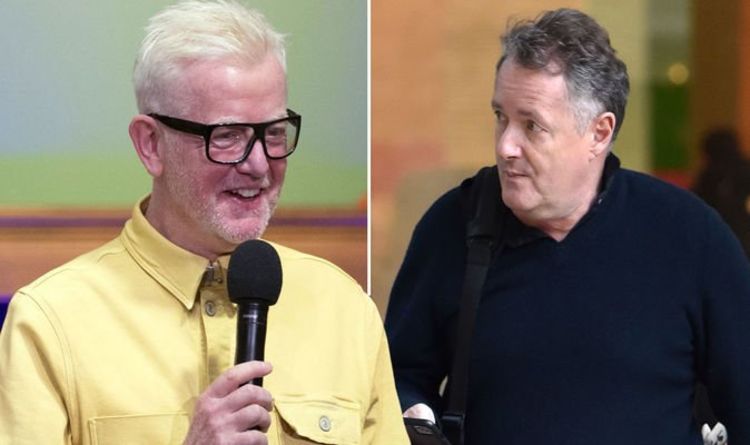 Chris Evans, 53, took aim at Good Morning Britain host Piers Morgan, after he and the rest of the breakfast TV panel tried out the new Instagram filter that determined how old you look. And Chris used this opportunity to take an almighty swipe at the outspoken presenter.

The host and his co-stars Rachel Horne and Vassos Alexander were discussing showbiz news as they stumbled upon the latest Instagram filter that’s taken users by storm.

“It’s in the papers today about the ageing app that you can have a go at, isn’t there, Chris started off the conversation.

“Because the GMB lot have been at it – Susanna Reid has taken a photograph of herself or had one taken, and she looks fantastic!”

“But this ageing app says she now looks 60, not what she will look like when she’s 60, the app has aged her at 60!” the host giggled as he sounded mortified.

Susanna is actually 49 years old, so we can’t imagine her results went down well!

The former BBC host went on to document more celebs that’d taken on the daunting challenge, one of them being former Girl Aloud star Cheryl Cole, who the app aged at 47 when she’s only 36.

Chris then laughed out loud as he read out the next GMB star’s results, something that didn’t sit right with his co-star Rachel.

Rachel and Vassos also giggled as the newsreader asked: “Gender bias?” referring to the fact that it had aged its female users older than the men.

The trio erupted with laughter as Chris took a dig at the 54-year-old ITV host before moving on to the next segment of the program.

Earlier last year, Piers took part in the viral FaceApp challenge, which offers a glimpse of things to come with filters, showing how celebrities might age – sometimes with dramatic results.

The presenter took to his social media to share a snap of his wrinkled complexion with a tongue in cheek caption to fans.

Sharing a selfie of his greyed hair and heavily wrinkled face, Piers simply captioned the snap: “I need a break.”

The discussion seemed to have Rachel back in good spirits though, after she became tearful reading out a listeners message on Friday morning’s show.

The co-stars were discussing listener’s favourite songs, but while Rachel was reading out one message, she was overcome with emotion.

“Todays absolute classic is chosen by Theresa Williams from Luton in Bedfordshire,” she read.

“She says I am a palliative care assistant for Hospice At Home.

“I love my job and I’m always meeting the most amazing people, but it can be tough.”

Suddenly there was complete silence, as Rachel’s voice trailed off her last words.

This moment was followed by a long pause, where it seemed she had moved away from the microphone.

Listeners heard a few sniffs, before she came back and continued to read: “Every morning you lot recharge me with joy and happiness and actually this song is your show in a nutshell,” she struggled, with a frog in her throat and eyes full of tears.