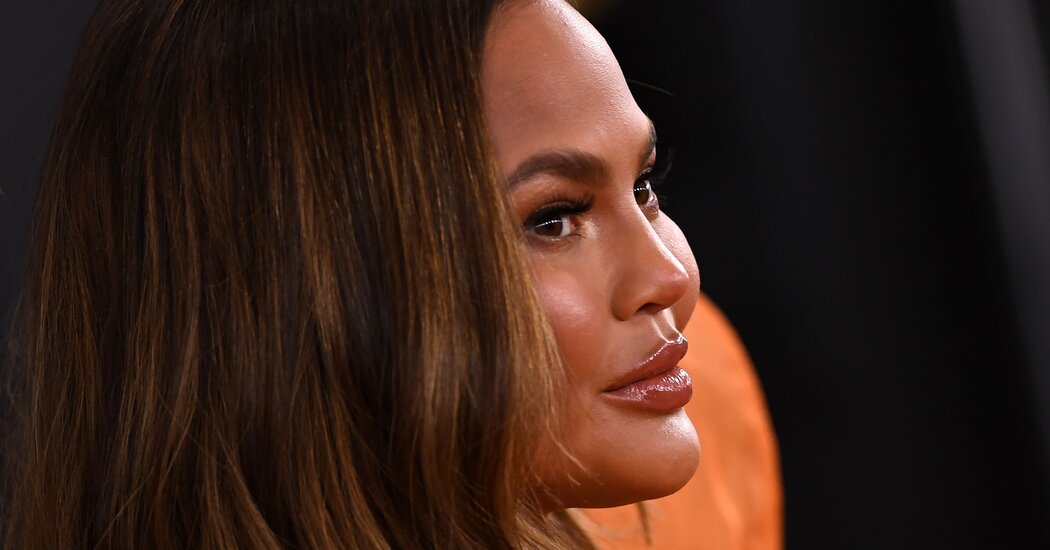 After nearly a month of silence following the loss of her third child, the model and cookbook author Chrissy Teigen shared the story of her pregnancy complications and grief on Tuesday in a personal essay she posted on the website Medium.

She and her husband, John Legend, had been quietly mourning the loss of their son, Jack, who was stillborn and delivered about halfway through Ms. Teigen’s pregnancy in late September. “I had no idea when I would be ready to write this,” she wrote in the essay’s opening line.

Ms. Teigen, 34, first shared the news of her pregnancy loss on social media, where she has millions of followers. “We are shocked and in the kind of deep pain you only hear about, the kind of pain we’ve never felt before,” she wrote on Instagram and Twitter. The posts included a photo of Ms. Teigen bowled over on a hospital bed, her body covered only by a blanket and hospital-issued socks and her hands in a prayer position. Tears streamed down her face.

In the weeks since, she wrote in the essay, she has received countless messages of support and kindness. Her words expressed deep gratitude for the outpouring of love from family, friends and fans.

“Social media messages from strangers have consumed my days, most starting with, ‘you probably won’t read this, but…,’” Ms. Teigen wrote. “I can assure you, I did.”

The essay detailed the placental complications that led her doctors to induce labor at 20 weeks and the disorientation and sadness that followed her delivery.

“I’m not sure I’ll ever forget the experience,” Ms. Teigen wrote. “My mom, John and I each held him and said our own private goodbyes, mom sobbing through Thai prayer. I asked the nurses to show me his hands and feet and I kissed them over and over and over again.”

According to the Centers for Disease Control and Prevention, one in 100 pregnancies at and beyond the 20-week mark is affected by stillbirth, and close to 24,000 babies are born stillborn every year. While 15 percent of known pregnancies end in a first-trimester loss, or a miscarriage, stillbirths are still rare. Ms. Teigen has been open about her experience in order to increase awareness around stillbirth and other kinds of pregnancy loss.

Initially, Ms. Teigen was criticized for posting photos from the hospital, including an image of her holding her stillborn son; she addressed those critics directly in her essay.

“I cannot express how little I care that you hate the photos. How little I care that it’s something you wouldn’t have done,” she wrote. “I lived it, I chose to do it, and more than anything, these photos aren’t for anyone but the people who have lived this or are curious enough to wonder what something like this is like. These photos are only for the people who need them.”

During all of her pregnancies, Ms. Teigen dealt with placenta problems, she wrote. This was the first, though, where she was diagnosed with a partial placenta abruption.

A partial placenta abruption is when the placenta separates from the lining of the uterus, causing bleeding to the mother and stripping the fetus of oxygen and nutrients. It is a rare diagnosis, according to the National Institutes of Health. The complication puts both the mother and the fetus at risk, which Ms. Teigen said a doctor explained to her before her delivery.

“He just wouldn’t survive this, and if it went on any longer, I might not either,” Ms. Teigen wrote. “We had tried bags and bags of blood transfusions, every single one going right through me like we hadn’t done anything at all. Late one night, I was told it would be time to let go in the morning.”

She went on to describe the complicated emotions that came in the wake of her loss: sadness, uncomfortable happiness, guilt and love.

“People say an experience like this creates a hole in your heart,” she wrote. “A hole was certainly made, but it was filled with the love of something I loved so much. It doesn’t feel empty, this space. It feels full.”

Ms. Teigen, who wrote that she was spending time with her children, Luna, 4, and Miles, 2, urged her readers to be open about their own stories of loss and grief. “I beg you to please share your stories and to please be kind to those pouring their hearts out,” she wrote. “Be kind in general, as some won’t pour them out at all.”