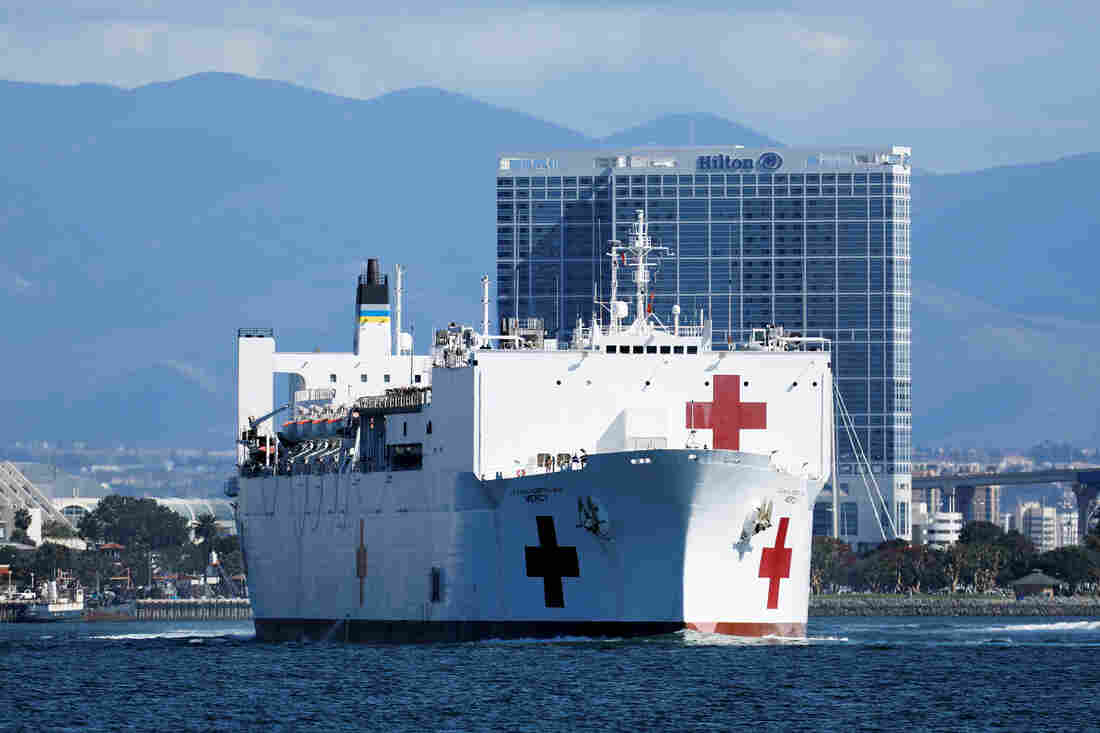 Navy medical and support personnel staff the USNS Mercy, but the hospital ship belongs to the Navy’s Military Sealift Command and is run by a crew of civilian mariners. The ship headed to the Port of Los Angeles on March 23 in response to the coronavirus pandemic. Mike Blake/Reuters hide caption 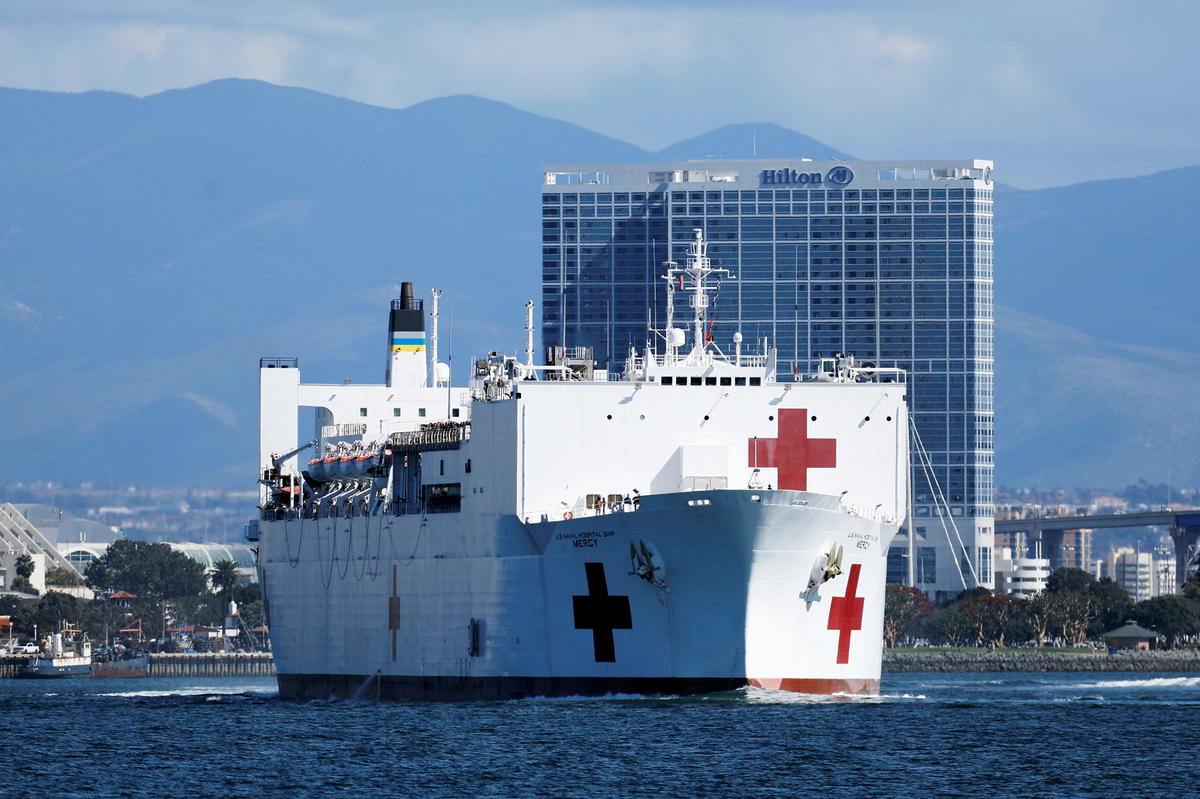 Navy medical and support personnel staff the USNS Mercy, but the hospital ship belongs to the Navy’s Military Sealift Command and is run by a crew of civilian mariners. The ship headed to the Port of Los Angeles on March 23 in response to the coronavirus pandemic.

The Navy has ordered members of its Military Sealift Command — a group of civilian mariners who supply military vessels around the world — to stay on their ships in an effort to prevent outbreaks of the coronavirus. A “gangway up” order enforcing the lock-down was issued on March 21.

But more than 20 civilian mariners from ships on missions or in ports and naval bases around the world told NPR it’s an overly harsh move, undercut by another decision to allow others — including Navy personnel and outside contractors — to come and go on the ships. The lock down only applies to civilian mariners. A similar order was not made for the Navy’s military personnel.

Even when a ship is docked and on a Navy base, the civilian mariners, known as CIVMARS, say they can’t leave to see family or go to previously planned medical appointments, and they say there isn’t enough personal protective equipment to go around.

“I feel like a prisoner,” says one man who can’t leave a docked ship to go to his house, just a 10-minute drive away. He says family members of the crew come to the chain link fence at the edge of the pier, to talk or bring medicines and food.

The civilian mariners NPR spoke to said they feared retaliation and NPR agreed to identify them by their first names or not name them at all.

“I live in my office,” says a chief mate on one ship. “I live with my coworkers. I eat every dinner, every meal with my boss. There’s nowhere for us to go. We have no escape.”

The order isn’t a two-week quarantine of people who’d been exposed to the coronavirus. It’s still in effect more than five weeks after it was issued and without a time limit. A senior MSC official, in sending the order, said the “unprecedented challenge” of the coronavirus required “swift implementation of actions that will protect the health of our afloat units and preserve our warfighting and humanitarian readiness.”

And it’s worked pretty well: In contrast to the USS Theodore Roosevelt, where almost 1000 sailors on a crew of about 4850 have tested positive, the virus has not spread through the command’s ships.

But many of those civilian mariners are furious at the loss of their liberty and say it doesn’t make sense that the “gangway up” order applies only to them, and that Navy personnel and contractors move on and off the ships. Three unions that represent them have filed a grievance against the Navy.

The MSC operates some 125 ships that supply the military, mostly Navy ships, around the world, with everything from fuel, food and ammunition. Some ships have civilian crews only, but in port can have Navy sailors and outside contractors on board. Other “hybrid ships” include both civilian mariners and Navy crew. CIVMARS also are key to shipyard repairs of the Navy’s own aging fleet of ships.

When coronavirus broke out on the Roosevelt, after a port call in Vietnam, it was the crew on the nearby MSC cargo ship, the USNS Richard E. Byrd, that took the trash and contaminated equipment from the aircraft carrier, says John Konrad, a former oil rig captain who runs the maritime website gCaptain. Those CIVMARS, working with minimal personal protective gear or test kits, decontaminated and stored those items from the Roosevelt. No one on the civilian ship got sick.

Another outbreak was reported this week on the USS Kidd.

But on the MSC ships, which include the hospital ships USNS Mercy and Comfort that have responded to the pandemic, there have been just a handful of cases of mariners being diagnosed with COVID-19, according to a spokesperson. 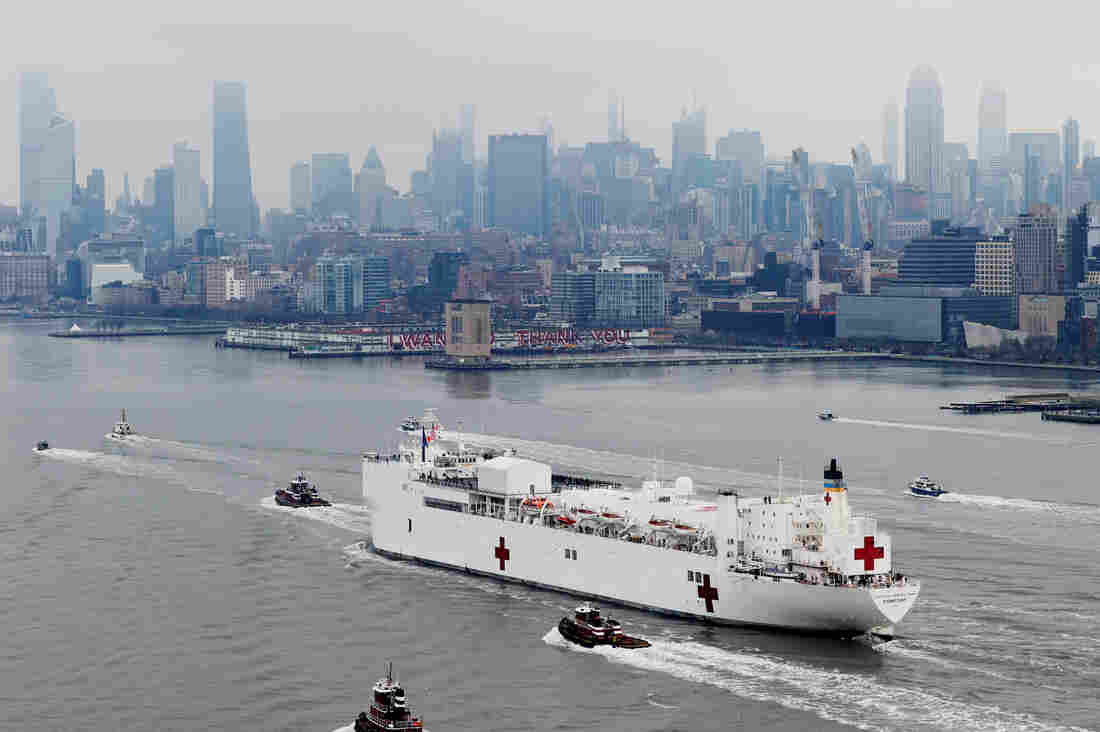 The USNS Comfort, another Military Sealift Command ship, entered New York Harbor on March 30. On Thursday, it is scheduled to end its deployment to New York City, where staff helped with the city’s pandemic response. Mike Segar/Reuters hide caption 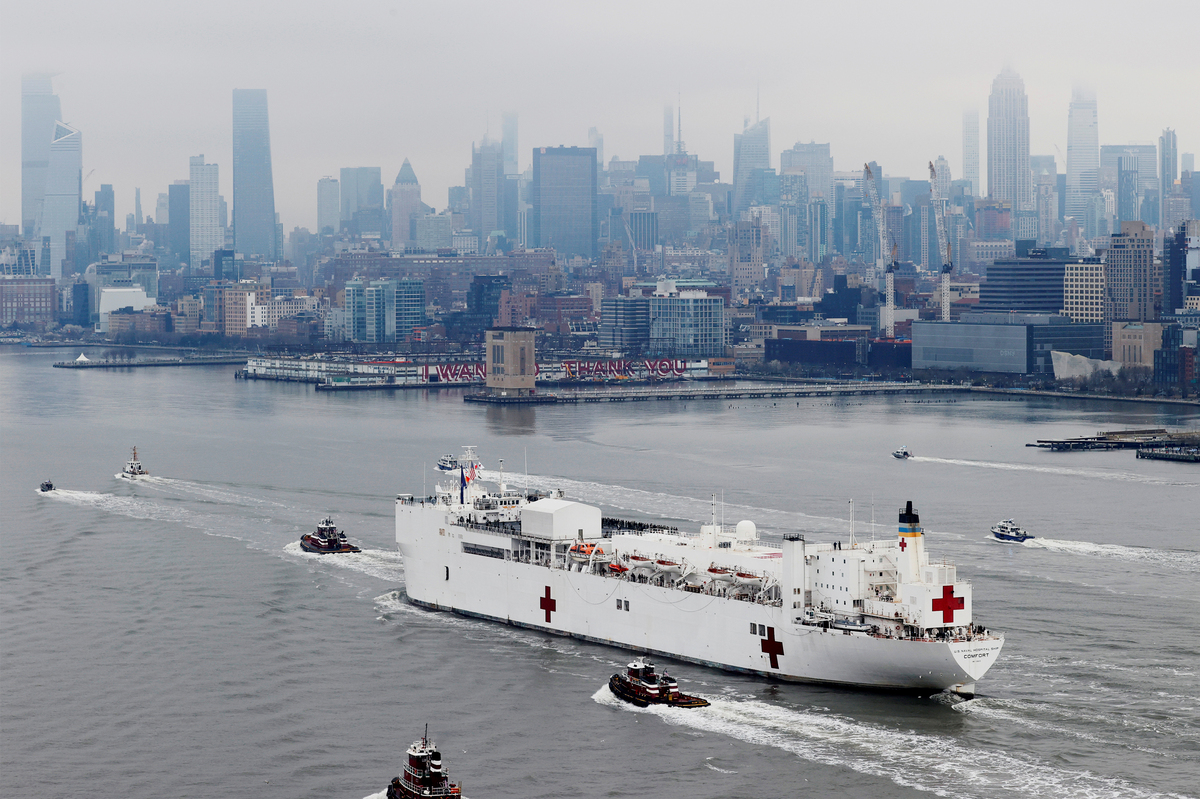 The USNS Comfort, another Military Sealift Command ship, entered New York Harbor on March 30. On Thursday, it is scheduled to end its deployment to New York City, where staff helped with the city’s pandemic response.

Still, to the civilian mariners, that protection has come with what they see as a double standard that comes down hardest on them.

One woman spoke from a ship in a West Coast port as she looked out the window. Some of the Navy crew, from the ship hers was supporting, were on the pier jogging. But she hadn’t been allowed off her ship in five weeks. “As I’m looking out the window, I feel like a little child when my mother said, ‘You can’t go outside,’ and I watched the other kids play,” she says.

“You restrict our liberty, [in] the name of protecting us from coronavirus,” says another CIVMAR. “But we are still exposed to the military personnel that go on and come back to work. And the contractors that have some jobs to do on the ship. They go home and they come back.”

Everyone is screened before they get on a ship, mariners and the MSC report. Their temperature is taken. They’re asked questions about symptoms and if they’ve been exposed to someone who’s sick.

Two civilian mariners working at a Massachusetts shipyard have tested positive for COVID-19 in the last few days. Although the source of their exposure isn’t certain, several outside contractors at the shipyard had tested positive earlier, says Tom Van Leunen, a spokesperson for the MSC. In addition, he notes, there have been a couple of confirmed cases of civilian mariners on the USNS Comfort, the hospital ship that is ending its deployment in New York.

The MSC says any shortages of protective gear are sporadic.

There are also few test kits, civilian mariners say, to determine if someone has the virus.

Many civilian mariners say they have access to N95 masks — at least in the last few weeks. Others, particularly those on ships now at sea, say they still can’t get the proper protective gear.

Like one civilian mariner who works on a ship that’s being repaired.

He says until he can get the proper mask, he’s not going to wear any covering.

“I figure, if I’ve got to wear a cloth over my face like a bandit from the Old West, it’s not really worth it. Cause a piece of cloth is not going to stop a micro-organism that’s airborne.”

The unions are asking for proper gear. Also, in their legal grievance, for extra pay for those confined to their ships.

One veteran mariner, close to retirement, said the current friction reflects some simmering resentments of crew with management that have resulted from staff shortages and stalled promotions.

She notes that many CIVMARS are older — often veterans or retired military — in their 40s, 50s and early 60s. Many, because of age and underlying health conditions, are more at risk if they contract COVID-19. Those civilian mariners are in jeopardy because the policy allows younger Navy sailors freedom to come and go on those same ships. “They’re allowed to go out and get sick and not make good choices,” she says. “They’re kids in the Navy.”

Salvatore Mercogliano, a professor at Campbell University with an expertise in military and maritime history, says CIVMARS he has spoken to have mixed feelings about the lock down. Many appreciate that they’ve been kept safe from the coronavirus. But they’re government employees, not military ones who are more used to restrictive orders from their superiors.

“It’s very easy for the Navy to sit there and say, ‘Hey, suck it up Mariners. We do this all the time.'” says Mercogliano. ” Well, Navy sailors are paid 24/7, they get benefits that civilian mariners don’t get,” including veterans benefits when they leave the Navy.

“If you told any government employee,” he says, “that they couldn’t go home or they couldn’t do anything, then they’d want to be paid for that.”

Konrad thinks the MSC’s quick and strict response to the pandemic could be a model, if it had been adopted by the Navy overall and the burden not left to CIVMARS alone. “These gangway up policies and extra procedures are working on board the MSC ships. They’ve been working on board for weeks.” Similar policies, he says, may have prevented the widespread outbreak on the Roosevelt.

Meanwhile, the civilian mariners are frustrated as their movement is restricted. One working in an East Coast shipyard, notes the Navy’s ban on alcohol on ships.

“I want to get off the ship,” he says, “and go to a bar and drink a couple of beers and have some real food for a change.”