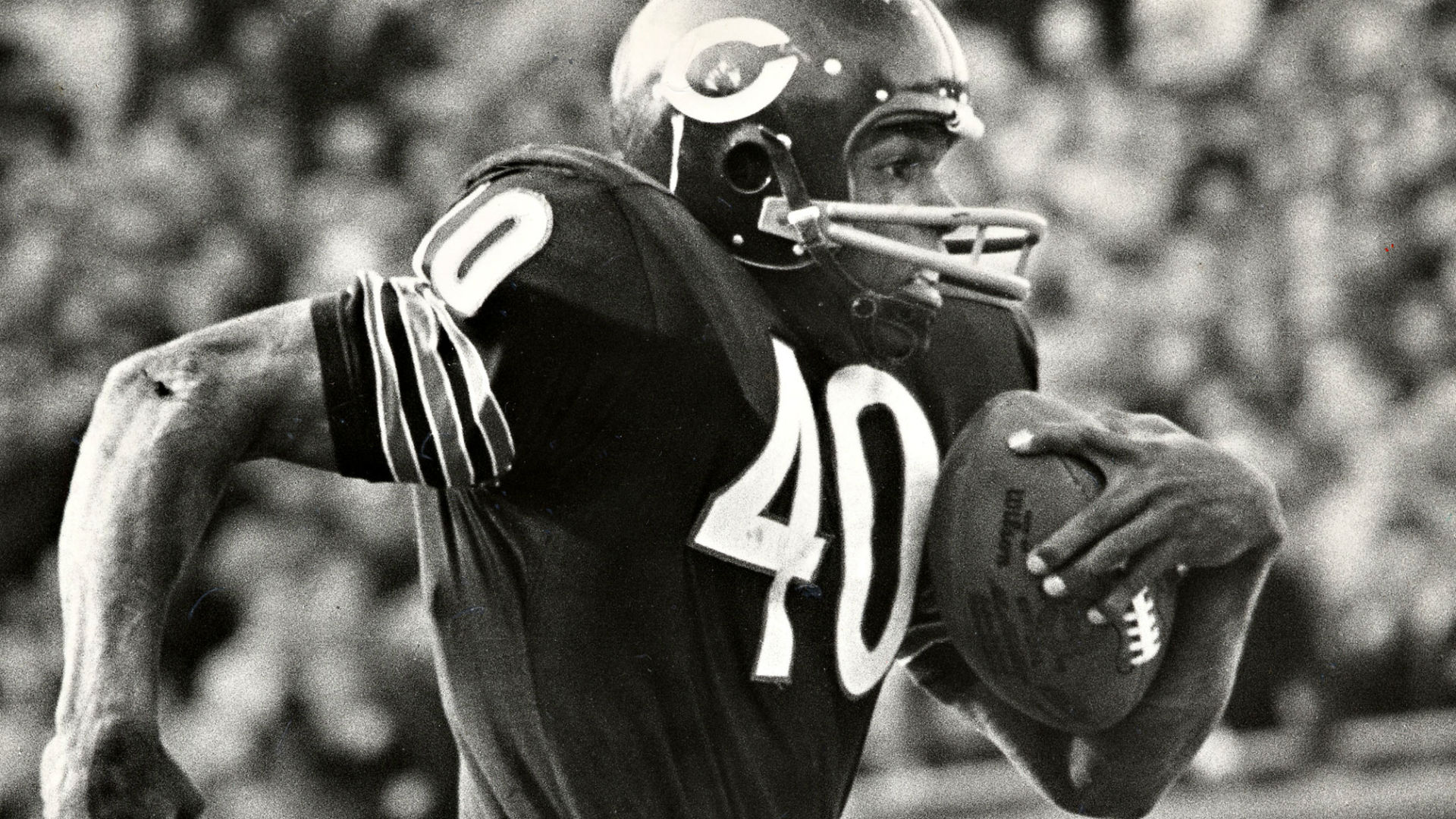 During the course of the 74-minute run time of “Brian’s Song,” the 1971 television movie based on the friendship between young Chicago Bears running backs Gale Sayers and Brian Piccolo, the director managed to find ample time to feature game footage of Sayers slashing through a variety of NFL defenses.

Sayers’ majesty as a runner is not the point of the film. Aired by ABC just seven years after passage of the Civil Rights Act, it primarily is about how two young athletes came to be so close despite competing for the same job and coming from such different backgrounds. Sayers, who was black, and Piccolo, who was white, were the first NFL players from different races to be paired as roommates.

Including all those Sayers runs was an ideal choice by director Buzz Kulik, who won a Director’s Guild award for his work. Because there might never have been a more beautiful piece of action put on film than Sayers on the move with a football in his hand, sometimes gripped more casually than a coach would prefer but most often beyond the reach of defenders who could not anticipate his invention.

MORE: The 10 most inspiring sports-movie soundtracks of all time

Sayers died Wednesday at age 77, just short of 49 years after “Brian’s Song” became a television classic, winning four Emmys and a Peabody Award, and 43 years after his induction to the Pro Football Hall of Fame.

It may be difficult for fans who were not contemporaries of Sayers to understand why he made the Hall of Fame with just 4,956 career rushing yards, or why news of his death struck fans of a certain age so hard. So much of it is there to be seen in “Brian’s Song,” though, both on the field and off.

I watched it again Wednesday morning, after hearing Sayers had passed. It was available for a $ 2.99 rental on Amazon Prime, and the first hint of Michel Legrand’s enduring theme loosened my tear ducts, though I hadn’t seen the movie since I was a pre-teen.

The film begins and ends with narration from actor Jack Warden, who portrays legendary Bears coach George Halas. The opening lines: “This is a story about two men … Ernest Hemingway said, ‘Every true story ends in death. Well, this is a true story.’”

Not all deaths arrive as prematurely as Piccolo’s, but “Brian’s Song” is not, fundamentally, a sad movie. It is a delightful film with a devastating ending. Sayers is portrayed as gradually growing from a shy rookie to an assertive team leader. Piccolo is portrayed as witty and generous, although viewers of today might squirm at the terminology he employs in conversations with and about Sayers that are designed to illustrate that he is not racist. That includes the N-word, when Piccolo is trying to motivate Sayers to rehab from a devastating knee injury — which causes Sayers to dissolve in laughter.

There is essential imagery included, though, including a scene of Sayers gripping Piccolo’s hand — just one black hand wrapped around a white hand on the screen — that made me sad to remember, a half-century later, there still are some fighting against the notion that “black lives matter.”

There is a scene in the film that feels invented, because it’s hard to imagine an NFL coach telling a star player such as Sayers just minutes before a game that his good friend has cancer. Sayers decides to make an emotional speech, before they take the field, about giving Piccolo the game ball. The Bears then proceed to lose.

Piccolo mocks Sayers in the hospital the next day, reminding him, “Pat O’Brien never said, ‘Let’s blow one for the Gipper.’”

Eventually it gets to the speech that slices through the viewer’s emotions the way Sayers once gashed defensive fronts. Piccolo, played by James Caan, is off screen dying in a hospital from testicular cancer. Sayers, played by Billy Dee Williams, is at a banquet to accept the George S. Halas Award for courage to acknowledge his comeback from his injury.

So shy earlier in the film that he barely gets out a coherent sentence in accepting the Rookie of the Year award, Sayers accepts the Halas trophy and, after thanking those presenting him the award, declares:

“It is mine tonight. It is Brian Piccolo’s tomorrow,” Sayers says. “I love Brian Piccolo, and I’d like all of you to love him, too. And tonight, when you hit your knees, please ask God to love him.”

That was not the invention of a clever screenwriter.

Those were Sayers’ words.

The movie launched Caan toward his Oscar-nominated role in “The Godfather,” Williams toward playing Lando Calrissian in “The Empire Strikes Back” and Warden to gaining an Oscar nomination for another football-related role, as trainer Max Corkle in “Heaven Can Wait.” It is based on Sayers’ autobiography, “I Am Third,” published in 1970 and co-authored by then-Sport magazine editor Al Silverman. I last read that book a half-century ago, but remember it, as well, as an insightful account of how Sayers recovered, by relying on his faith in God and his friendship with Piccolo, from blowing out his knee in his fourth season with the Bears to post one more 1,000-yard season before an injury to his left knee cut short his career.

Warden’s narration ends the film with a simple line. “When they think of him, it’s not how he died that they remember. It’s how he lived. How he did live.” The words were written about Piccolo then. They apply to both him and Sayers now.