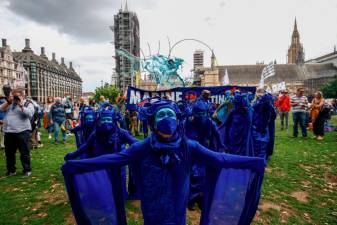 BLUE Sandford turned 17 in a police cell. Last year, she began an indefinite school strike. Now, the British environmental activist has written a book for fellow teens who want to act on climate change but do not know where to start.

In Challenge Everything, which was published in Europe and North America on Sept 8, Sandford explains how the failure of governments to heed warnings from climate scientists prompted her to join civil disobedience movement Extinction Rebellion, which launched fresh protests in Britain last week.

Sandford, who was arrested for blocking a road in London’s Trafalgar Square at previous demonstrations in October, uses the book to lay out a vision of a sustainable society rooted in a sense of community and connection with nature.

“We can’t all just go and get arrested and that be the end of the story,“ said Sandford, 17, who was arrested again at the end of August in Parliament Square, a focus of the latest protests.

“I think we need to start from a place of science and empiricism and figure out the truth about the climate and ecological crisis, and then act.”

Having spent much of her life living with her family on an off-grid farm on an Inner Hebrides island off the coast of Scotland, Sandford attended school in London.

She chose to leave formal education in June last year in solidarity with a wave of Friday afternoon school strikes inspired by Swedish activist Greta Thunberg.

Sandford has since joined protests to try to stop woodland outside London, where she played as child, being felled for a planned high-speed rail link known as HS2.

“I don’t really want to be a climate-change activist,“ Sandford told Reuters television. “I feel like I’ve sort of been forced into it because nothing else is working.” – Reuters