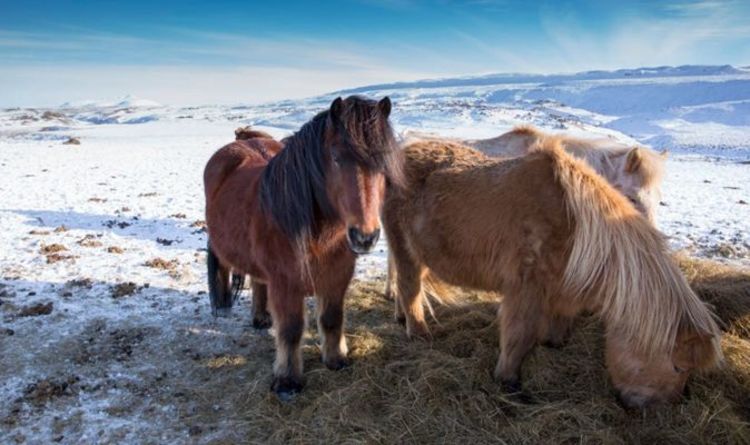 Animals such as horses, bison and reindeer could play a pivotal role in the fight against global warming if they are released into the North Pole, scientists have stated. Grazing herbivores could slow down the pace of the melting permafrost, and restore 80 percent of it by 2100.

Permafrost is a permanently frozen layer beneath the surface, which affects 18 million square kilometres in the upper reaches of the northern hemisphere.

The layer of ice contains rocks, soil, sand and stores the remains of plants and microbes which have been trapped in the permafrost for millions of years.

This means the carbon dioxide (CO2) from dead plants and microbes has also become trapped in Earth’s natural freezer – and with permafrost beginning to melt at an alarming rate, this CO2 will eventually be released into the atmosphere.

Current estimates suggest there is up to 1.5 trillion metric tons of carbon stored in permafrost.

Scientists have stated the permafrost could melt dramatically, leading to a steady increase of CO2 into the atmosphere over decades and centuries, acting as a greenhouse gas and making the planet warmer.

However, grazing mammals could help preserve the permafrost as their stamping hooves compact it into the ground.

The simulation, ran by Christian Beer of the University of Hamburg, found releasing herds which compact the permafrost, the global temperature will rise by 4C by 2100.

Without it, the simulation showed temperatures could rise by 7C, according to the study published in the journal Scientific Reports.

Mr Beer said: “This type of natural manipulation in ecosystems that are especially relevant for the climate system has barely been researched to date, but holds tremendous potential.”

“It may be utopian to imaging resettling wild animal herds in all the permafrost regions of the Northern Hemisphere.