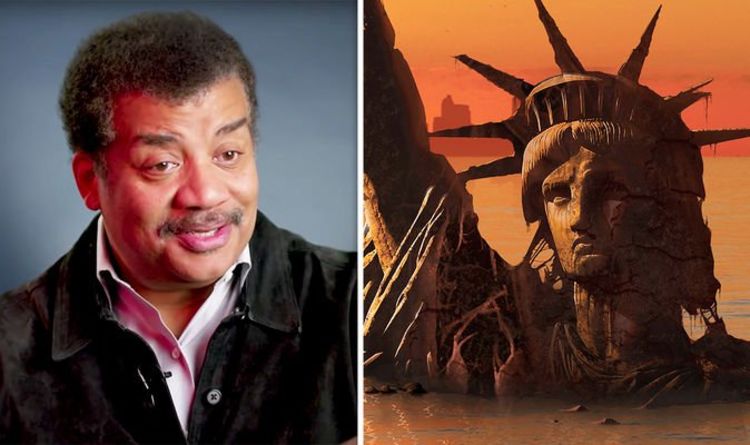 Global warming is the long-term rise in the average temperature of the Earth’s climate system accelerated by the increased burning of greenhouse gases by human beings over the last century. One of the most shocking effects of global warming on the climate is the rising sea levels from the melting of the polar ice caps, as well as more frequent extreme weather events, including hurricanes and tsunami due to the increased level of warm water. This is threatening to put the US coast underwater, sinking places such as New York City, if considerable action isn’t taken to slow the effects.

Neil deGrasse Tyson knows this all too much.

“In fact, I live in New York City, where we have the Statue of Liberty, holding the declaration of independence in her left arm and in her right arm the torch.

“If the water ice that is on land melts, the ocean level would rise to reach her left elbow, so that takes out all of New York City and every other coastal city that we’ve spent thousands of years building.

“So, life will be very, very different, so the way I look at it is, there are people who want to colonise other planets, give us an escape route, we’ve trashed Earth, let’s move elsewhere.”

Dr Tyson then talked about terraforming Mars, an idea that has been floated about in the last few years should Earth become inhabitable.

Mars is, on average, -80C, so scientists are looking at geoengineering, or climate engineering, which is the large-scale intervention in the climate system.

This idea has been raised in a bid to warm the planet using solar radiation, but Dr Tyson made a brilliant point.

He added: “Well there aren’t many places to move, you will vaporise on Venus, are rotates once every 24 hours, which is interesting and tipped on its axis like Earth, has polar ice caps like we still do at the moment, and there is evidence of running water.

Despite his brilliant idea, there is substantial agreement among scientists that climate engineering cannot substitute for climate change mitigation.

- Advertisement -
Facebook
Twitter
Pinterest
WhatsApp
Linkedin
ReddIt
Email
Tumblr
VK
Previous articleYour Galaxy S8 gets an important update but it’s not the one you really wanted
Next articleLife on Mars? Astronomers get closer to solving methane mystery – Could it be aliens?