Climate change effects: Sea levels on US coasts rising faster than EVER – New York at RISK 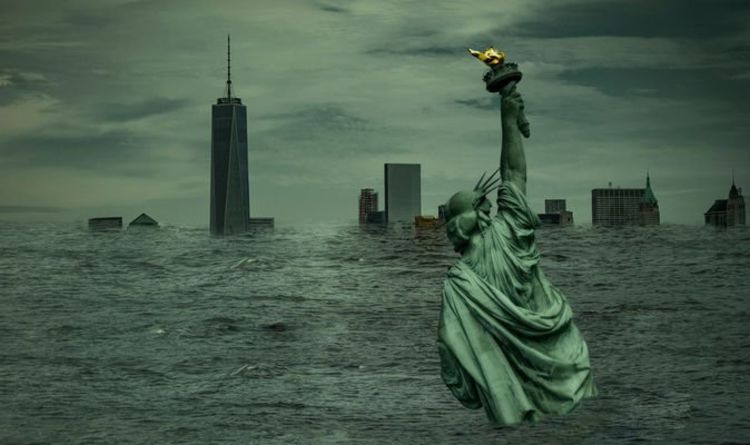 An annual review of US coast lines has found that sea level rises are speeding up year-on-year. The annual report from William & Mary’s Virginia Institute of Marine Science (VIMS) monitors 32 tidal stations around the US, and found sea levels had risen in 27 of them in 2019.

In 25 of the tidal stations, sea levels had risen more than at any other rate since experts started recording in 1992.

The Gulf Coast in Louisiana, and Galveston and Rockport in Texas were at the very top of the list.

Rockport is the fastest rising of them all, and experts believe by 2050, sea levels will be 0.82 metres higher than they were in 1992.

Only five of the stations reported a drop in sea levels, four of which were in Alaska where coastal mountains are forming, pushing land higher, whereas on the East Coast, land is slowly sinking.

VIMS marine scientist Molly Mitchell said: “Although sea level has been rising very slowly along the West Coast, models have been predicting that it will start to rise faster.

“The report cards from the past three years support this idea.”

NASA data had revealed it predicted sea levels would rise by just 0.62 metres by the end of the century.

But the latest report card indicates that experts may need to review this assessment.

Ms Mitchell added: “Seeing acceleration at so many of our stations suggests that – when we look at the multiple sea-level scenarios that NOAA puts out based on global models – we may be moving towards the higher projections.

“We have increasing evidence from the tide-gauge records that these higher sea-level curves need to be seriously considered in resilience-planning efforts.

“If you cross a threshold in terms of something like sea-level rise, what came before – say a tide-gauge record that began in 1900 – is biased in terms of seeing where you’re going.

“We think ice sheets are melting faster today, and if that’s true then the previous 90 years of data won’t accurately predict the future.”

The project’s founder, VIMS emeritus professor John Boon, said: “The key message from the 2019 report cards is a clear trend toward acceleration in rates of sea-level rise at 25 of our 32 tide-gauge stations.

“Acceleration can be a game changer in terms of impacts and planning, so we really need to pay heed to these patterns.”

Globally, as it stands, sea levels are rising at about 8mm a year due to melting ice, and while that does not seem like much, the implications for future generations could be huge.

DON’T MISS
Climate crisis: UN warns of ‘EXTREME’ weather ahead
Climate change: DeGrasse Tyson’s genius plan to ‘turn Earth back’
How London and New York are at risk of being submerged under water