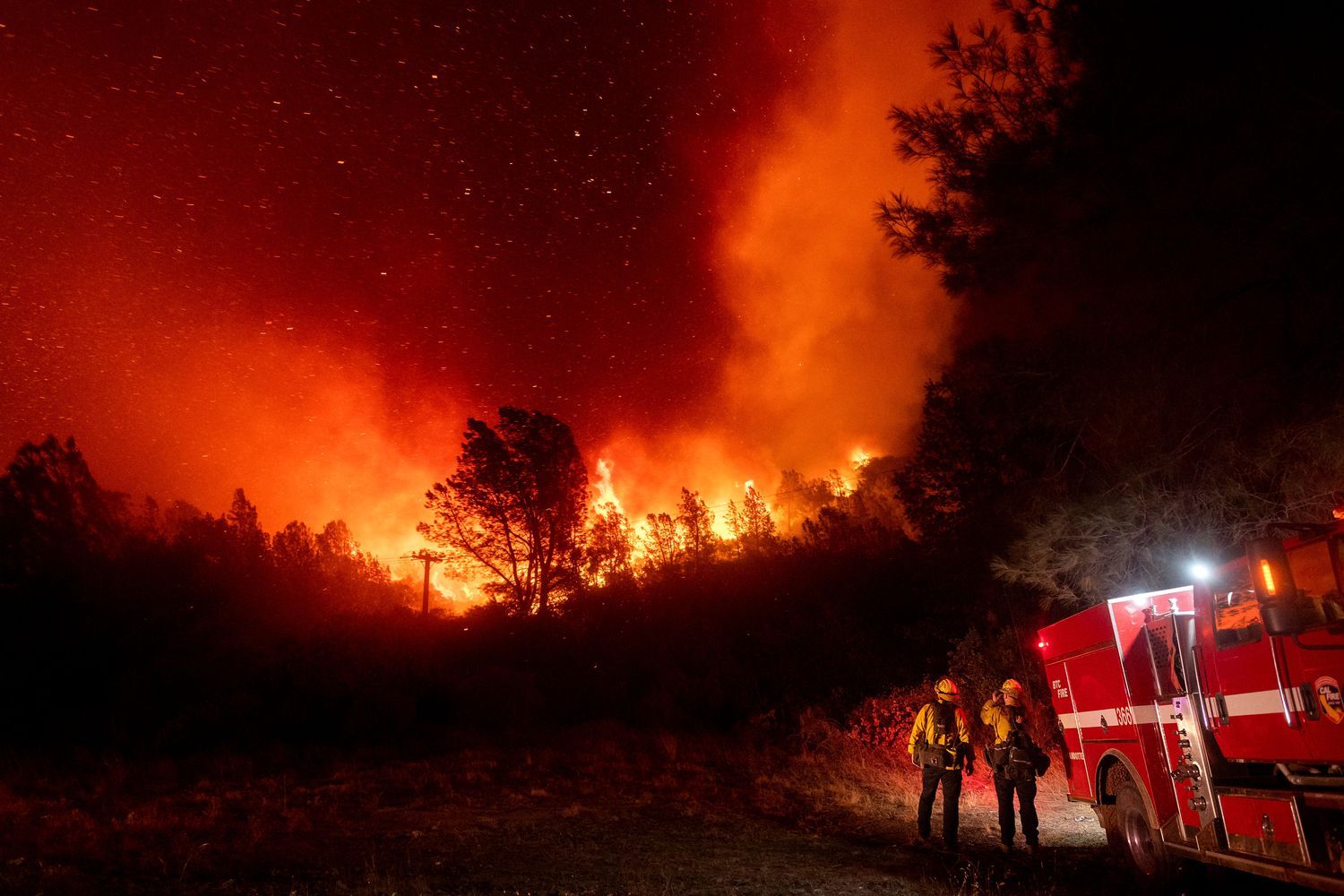 While Biden and Trump’s divergent attitudes toward climate change were already well established, their comments on Monday only stood to underscore their differences on an issue that has put lives at stake.

The showdown came as historic wildfires have displaced tens of thousands of residents up and down the West Coast, tinged the sky a red-orange hue and created some of the world’s worst air quality in parts of California. At least 35 people are dead across California, Oregon and Washington, and more than 3 million acres of land have been scorched.

In remarks from Wilmington, Del., the former vice president pitched himself as the only choice to combat climate change shortly ahead of Trump’s first visit to view the damage in California from the fires that have been raging for weeks.

Trump faced a more direct confrontation at his event here in California’s capital, from Gov. Gavin Newsom and Wade Crowfoot, the head of the state’s Natural Resources Agency.

“I think we want to work with you to really recognize the changing climate and what it means for our forests and actually work together with that science,” Crowfoot told the president at the wildfire briefing, which featured local and federal officials involved in combating the fires. Crowfoot emphasized to the president that “science is going to be key.”

While he applauded Trump’s focus on forest management as a method of controlling and fighting wildfires, Crowfoot warned Trump not to “ignore” the science of climate change, arguing that it would be misguided to “sort of put our heads in the sand and think it’s all about vegetation management,” a course of action he said would not ultimately protect Californians.

Trump, however, pushed back on Crowfoot’s assessment, telling the secretary that “it’ll start getting cooler, just watch.”

“I don’t think the science agrees with you,” Crowfoot responded, to which Trump countered: “I don’t think science knows, actually.”

After the briefing, Crawfoot fired back at the president on Twitter, posting a graph of California’s average temperature from June to September, with a trendline showing that figure steadily increasing over the last four decades.

Newsom, a Democrat with whom Trump has had a hot-and-cold relationship, also challenged the president on his views, even as he acknowledged that Trump was unlikely to change them.

“I’d be negligent, and this is not — we’ve known each other too long and as you suggest, the working relationship, I value,” he told the president. “We obviously feel very strongly that the hots are getting hotter, the dries are getting drier.”

“Something’s happened to the plumbing of the world and we come from a perspective, humbly, where we submit the science is in and observed evidence is self-evident, that climate change is real, and that is exacerbating this,” he continued, urging Trump to “please respect the difference of opinion out here with respect to this fundamental issue of climate change.”

Climate change is playing a role in the severity of the fires, which are expected to increase in frequency in future years. The U.S. endured its fourth-hottest summer ever recorded amid an abnormally dry season, according to the National Oceanic and Atmospheric Administration. That helped create the volatile conditions on the heels of the nation’s sixth-warmest winter, as lightning strikes ignited West Coast blazes even before official wildfire season began.

“Donald Trump’s climate denial may not have caused these fires and record floods and record hurricanes, but if he gets a second term these hellish events will continue to become more common, more devastating and more deadly,” Biden said on Monday.

Biden laid out the consequences of climate change along the nation’s coasts and in suburbs, pointing to the health concerns stemming from wildfires and other natural disasters that disproportionately affect communities of color, as well as the massive costs to the economy and the national security threats posed by sea-level rise.

“With every bout of nature’s fury, caused by our own inaction on climate change, more Americans see and feel the devastation, whether they’re in big cities, small towns, on coastlines or farm lands,” Biden said. “It’s happening everywhere and it’s happening now, and it affects us all.”

Biden also took aim at Trump’s central campaign theme on law and order, using the same phrasing he has employed when criticizing Trump’s response to the protests that swept across the country to attack him on his lack of action on climate change.

Trump has also warned that immigration is threatening U.S. suburbs, an assertion that Biden called “ridiculous” in his remarks.

Biden positioned Trump’s policies and actions as “backward-looking politics” that will stand to harm the environment, make communities less healthy and hold back economic progress.

“It’s a mindset that doesn’t have any faith in the capacity of the American people to compete, to innovate and to win,” Biden said, pointing instead to his own climate plan, which calls for making buildings more energy-efficient, boosting clean-energy jobs and expanding electric transportation.

“We have to act as a nation,” Biden said. “It shouldn’t be so bad that millions of Americans live in the shadow of an orange sky and are left asking, ‘Is Doomsday here?’”

Ryan Lizza {authortext} Within hours of Ginsburg’s death, Mitch McConnell made it clear Democrats fears were warranted. As McConnell had previously signaled publicly, he released a...
Read more

Express.co.uk readers can vote in our poll on whether people in England should face an eye-watering £10,000 fine for failing to self-isolate. And let...
Read more