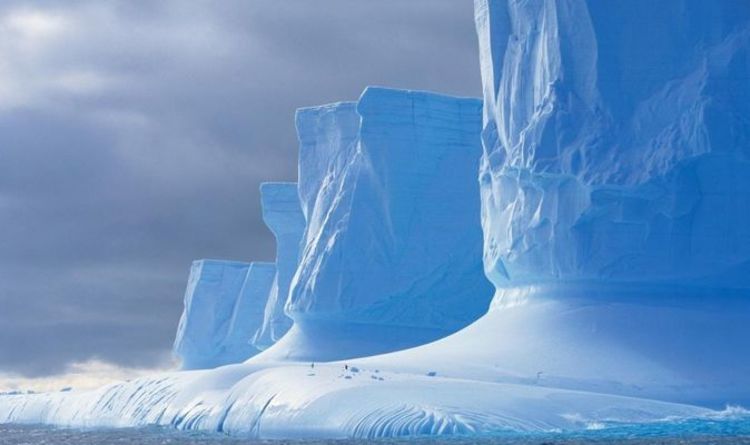 Climate scientists have warned that ice shelves which encircle the frozen continent of Antarctica are showing signs of fracturing, which could have huge implications for the rising sea levels. Fractures in the surface of the ice shelves, which usually remain frozen all year round, are making them vulnerable to collapse.

Research from the University of Edinburgh and international institutions has revealed that the ice shelves act as a crucial barrier from preventing glaciers moving from land to sea.

However, up to 60 percent of these ice shelves are now vulnerable thanks to the warming planet, and their sudden failure could have “huge implications for sea level”.

Satellite observations show large fractures crop up regularly, and if they fill up with meltwater, they can break away from the land with ease.

The study suggested more than 350,000 square miles of floating ice shelves could split if the fractures completely break.

To put that into perspective, the UK is 93,630 square miles.

As a result, if these ice shelves were to break away, which could happen quickly according to the researchers, sea levels could rise by one metre.

University of Edinburgh’s School of GeoSciences’ Dr Martin Wearing said: “We’ve seen in the past that the sudden collapse of ice shelves can trigger rapid acceleration of the glaciers that flow into them, and, in turn, sea-level rise.

“We have found that stresses within vast sections of Antarctica’s ice shelves are sufficiently large that they could collapse if, as climate models predict, surface melting increases substantially in coming years.

“We hope our use of machine learning is a first step towards further applications of AI (artificial intelligence) in the analysis of the ever-growing quantity of data from the polar regions.”

“If they fill up with meltwater, things can happen very quickly after that, and there could be major consequences for sea levels.”

The University of Edinburgh said melting water seeping into these ice shelf cracks will “increase significantly in the future unless major steps are taken to tackle climate change.

“The collapse of Antarctica’s ice shelves could impact millions of people living in low-lying communities around the world, the team says.”

Taken in tandem, the researchers were able to accurately date the epic eruption to within two years, in 431 AD. A cutting-edge three-dimensional tephra dispersal...
Read more
Science

And although lockdown has been lifted in much of the country, Professor Winston believes the NHS Track and Trace app launched last week may...
Read more
Science

The SpaceX founder made his warning on the Sway podcast, where he reiterated his fears the Sun will engulf the Earth one day. Mr...
Read more
Science

What exactly the Universe is made up of is a bit of a mystery, but scientists have for the first time calculated the amount...
Read more