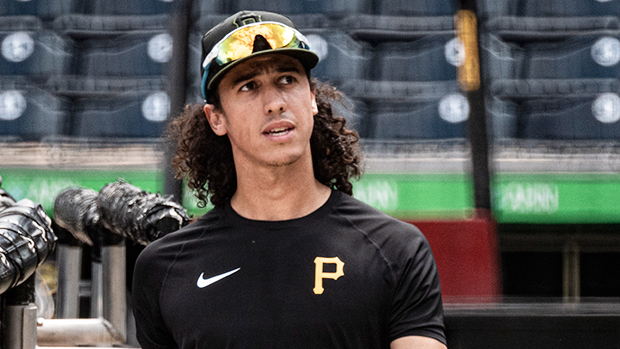 The mystery man who was photographed hugging Vanessa Hudgens on a night out has been identified as Cole Tucker, a 24-year-old baseball player.

Vanessa Hudgens, 31, may have a new man in her life! Ten months after news broke that the actress had split from longtime love, Austin Butler, she’s been spotted out with a new man. Vanessa was photographed holding hands with Cole Tucker, 24, while out in Los Angeles on Nov. 21. On the same night, Vanessa uploaded a photo of herself to Instagram with the caption, “Date night.” As this apparent romance heats up, here’s more to know about Cole:

1. He’s a professional baseball player for the Pittsburgh Pirates. Cole plays shortstop and outfield for the Pittsburgh Pirates. He was selected by the team in the first round of the 2014 MLB draft. At the time, he was just 18 years old, and had previously committed to playing at the University of Arizona. Cole spent the next few years playing for the Gulf Coast League Pirates, West Virginia Power, Bradenton Marauders, and Altoona Curve before being selected for the Pirates’ main roster at the beginning of the 2019 season. He made his major league debut in April of that year.

2. He’s a switch hitter. Cole is a unique baseball player because of the fact that he can switch hit, which means he bats both righty and lefty.

3. He comes from a mixed race background. Cole grew up in Arizona with an African-American father and white mother.

5. He has two brothers. Cole’s younger brother, Carson [Dookie] Tucker, is also a baseball player. He was selected by the Cleveland Indians in the 2020 MLB draft. The family’s third son, Quinn Tucker, is a photographer/filmmaker, according to his Instagram.