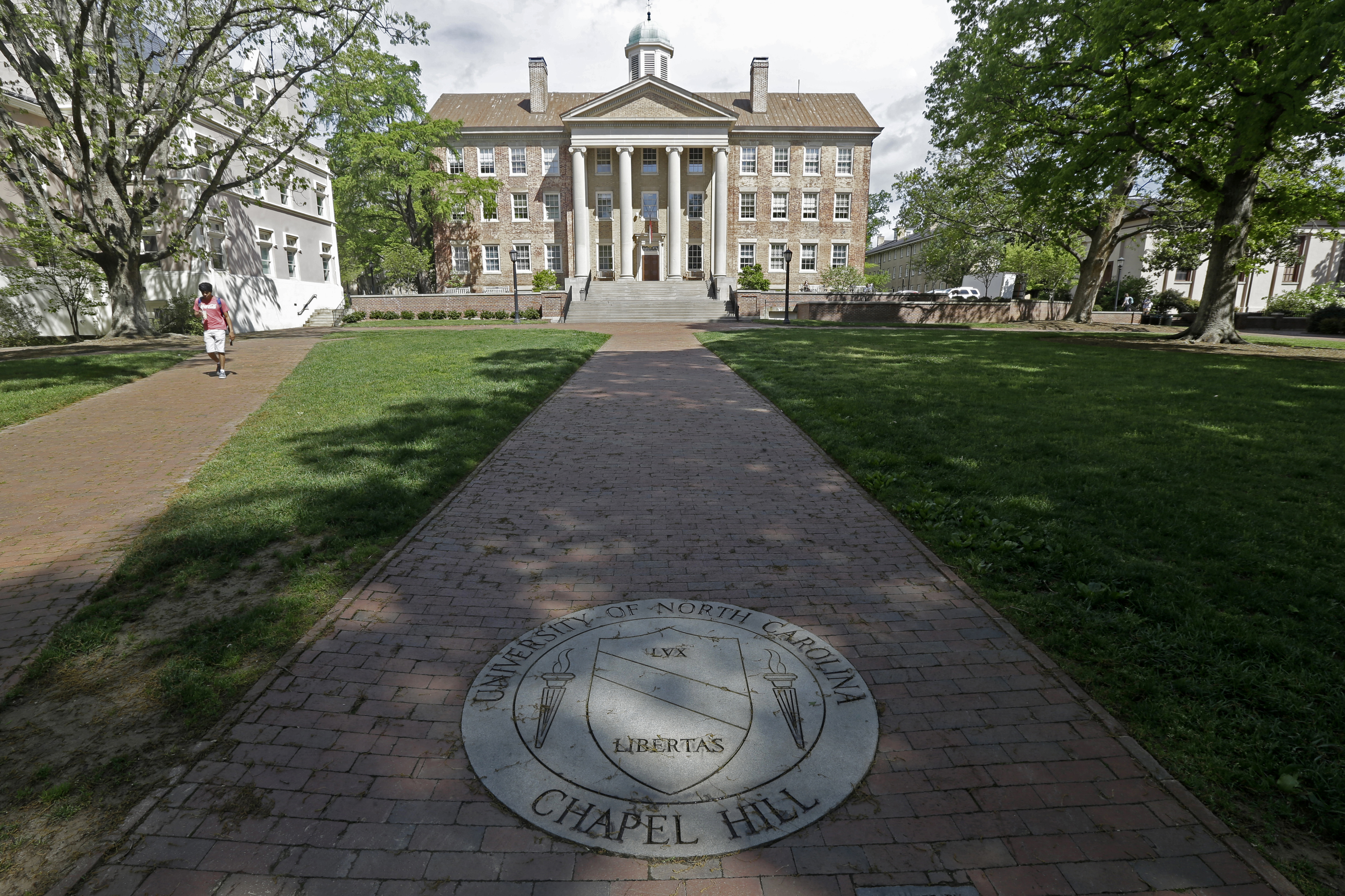 College presidents and their boards have a seemingly impossible task: Protect school finances without putting student and faculty lives in danger. Colleges could be sued if schools reopen dorms and dining halls as a second wave of infections strikes. But financial woes in the billions loom if campuses stay shut, especially at small, historically black colleges.

“I hope that we will not have a great deal of political pressure to move ahead with opening up a campus, particularly given that we have various means of teaching, given the vulnerable populations that we have on a campus,” University of North Carolina business school dean Doug Shackelford said.

“We’ve got to be really careful about how we handle things on a college campus in ways different from Main Street in local communities or other business districts.”

Flagship universities in GOP-led states like Texas and Georgia say they plan to welcome students back this fall as well as Purdue University in Vice President Mike Pence’s home state of Indiana. After Purdue President Mitch Daniels said his mammoth school with an enrollment of more than 30,000 undergraduates expects to reopen, he earned praise from President Donald Trump. "I noticed where Purdue University, a great school and a great state, wants to open and have students come in. I think that’s correct," said Trump, who also pointed out that Harvard "wants to have students come back in the fall."

Harvard, often viewed as a leader among colleges, said in a statement earlier this week: "Harvard will be open for fall 2020," though not all activities may resume.

But there is nothing uniform about decision-making: Indiana University President Michael McRobbie says a full return to in-person teaching and research this fall is “highly unlikely” though no decision has yet been made for his campuses.

A trio of Southern college heavyweights — Alabama, Georgia and North Carolina — have tentative plans to return to campus in the fall. So do Baylor University in Texas and Old Dominion University in Virginia. Brown University President Christina Paxson argued “the reopening of college and university campuses in the fall should be a national priority” in a New York Times op-ed.

“I would hope that they’d have students,” Trump said of the nation’s schools. “I think that the whole concept of computer learning is wonderful, tele-learning, but it’s not the same thing as being in a classroom in a great college or a college of any kind.”

Money is a major factor. S&P Global Ratings darkened its financial forecasts for more than 100 colleges and universities this week, meaning the schools could face lower credit ratings as they confront lost revenue and limited liquidity.

“In our opinion, a fall 2020 with significantly fewer international students, as well as lower domestic enrollments overall, will cause serious operational pressures,” S&P analysts said.

The University System of Georgia is facing the potential loss of up to $ 350 million in revenue through the summer, Chancellor Steve Wrigley told regents this month, and the system has looked to embattled Republican Gov. Brian Kemp and a state task force for guidance on reopening nearly 30 campuses that enroll upwards of 300,000 students.

University of Texas officials also hope to reopen campus in the fall. So does Texas A&M. Texas Gov. Greg Abbott described state college expectations to reopen and play football as “more glimmers of hope” this week, though he cautioned schools could change course if the virus worsens.

"As the facts change, plans will change," Abbott told The Texas Tribune.

Bill Roper, interim president of the University of North Carolina system, said this week that school chancellors will be able to consider staggered or shortened academic calendars — while other schools might cut down student headcounts in classrooms and campus housing. But he expects to reopen campuses for the fall semester.

Many other colleges’ decisions, though, remain delayed until early summer and may not be as cut and dried as choosing between opening campuses or staying online — some classes might remain online. Even schools with sunny forecasts and cautious optimism are hedging. That’s because the traditional college campus is designed for the exchange of ideas — and consequently, pathogens.

Rutgers University is slashing spending as New Jersey Gov. Phil Murphy grapples with a deadly outbreak. Rutgers President Robert Barchi offered no direct mention of a fall semester return in a recent message to campus. Coronavirus-spurred revenue losses could reach $ 1 billion at the University of Michigan, but Michigan public universities have not yet made a decision about the fall.

The uncertain outlook for the virus makes all planning difficult. A prominent model used by the White House to predict the trajectory of the coronavirus outbreak revised its estimated death toll sharply upward this week, projecting the disease could result in more than 74,000 fatalities across the United States by early August.

The forecast cuts off before the fall, when many epidemiologists anticipate a second wave of the outbreak to hit the U.S., and even that revised projection could be a gross underestimate of the coronavirus’ ultimate death toll.

To battle any resurgence, college classrooms could be filled halfway to better comply with social distancing guidelines. Students and faculty might have the option to check into a course on Zoom. Large campus buildings could be converted into super-sized lecture halls. Temperature checks and contact tracing could become part of college life.

“Even if university campuses do open up, it’s just absolutely under no circumstances going to be what it was like last fall —and for the last hundred falls,” said Dan Hurley, CEO of the Michigan Association of State Universities. “There will be significant social distancing and physical distancing in place.”

Hurley said the group of institutional leaders has taken a more conservative, data-driven approach to reopening — which has been touted by Gov. Gretchen Whitmer.

“But from what I’ve seen here in Michigan, I think it’s been — as in the case with our governor — siding on the side of conservatism with regard to when and how to reopen the campuses. It’s going to be data and science, more than anything, that is going to determine operational statuses.”

That is also the potential for a competitive imbalance among colleges as they look at a possible return to normal. Large universities can marshal medical schools and scientific experts to carry out virus testing and contact tracing that public health officials say is essential for any economic revival. Smaller schools might not have those resources.

University of Arizona President Robert C. Robbins announced the school plans to resume in-person classes on Aug. 24 — after having his blood drawn as part of a massive university-led effort to analyze samples from first responders, university students and staff for antibodies that can signal exposure to the coronavirus.

Purdue University’s plan to bring students back to campus this fall includes a commitment to test patients during the school year with help from the school’s own biosafety laboratory.

But historically black colleges and universities, which heavily rely on tuition dollars to keep their schools afloat, face an additional question as to whether their students will be able to return in the fall as their families are hit harder medically and financially by the coronavirus.

“The empirical data is starting to show that African Americans are bearing a disproportionate burden of the effects of the coronavirus, in large part due to a couple factors,” said Lodriguez Murray, United Negro College Fund senior vice president of public policy and government affairs.

“If that disproportionately impacts black people and black families, and black families send their students to HBCUs, that means that typically our school population is more likely to be impacted by Covid-19 than populations at non-HBCUs or predominantly white institutions,” he said. “That makes the projections for the fall incoming class much more tenuous than they would regularly be.”

Others are waiting, including some of the nation’s most elite institutions. Stanford University doesn’t expect to make a decision about the fall quarter until June, President Marc Tessier-Lavigne told campus this week.

“Between ‘fully in-person’ and ‘fully online’ instruction are many options that we and universities across the country are evaluating right now,” Tessier-Lavigne wrote. “We also need to consider the very real possibility that the winter could be much like the fall in terms of our progress against COVID-19 and the precautions that are necessary as a result.”

California State University, Fullerton was the first to announce its classes will remain online this fall, a decision aligned with Democratic Gov. Gavin Newsom’s cautious approach to reopening his state.

Institutions could face potential lawsuits if they bring their students back to campus too soon and there is an outbreak, said James Keller, co-chairman of Saul Ewing Arnstein & Lehr’s higher education practice and K-12 schools practice.

Keller, who represents colleges and universities, said they’re in a “tough spot." While he would argue that the governors and mayors have some responsibility because of their guidance, Keller said: “Ultimately, are parents going to try to hold the school accountable if you bring people back and there’s an outbreak in a dorm and 20 kids get sick? Yes.”

“I think the schools that reopen are absolutely at risk for claims — it’s a pretty straightforward negligence claim or maybe even a fraud claim,” he said. “You represented your campus would be safe. Relying on that, I sent my child there, but it turns out it wasn’t safe. I would envision, from my perspective, defending schools with all kinds of defenses.”