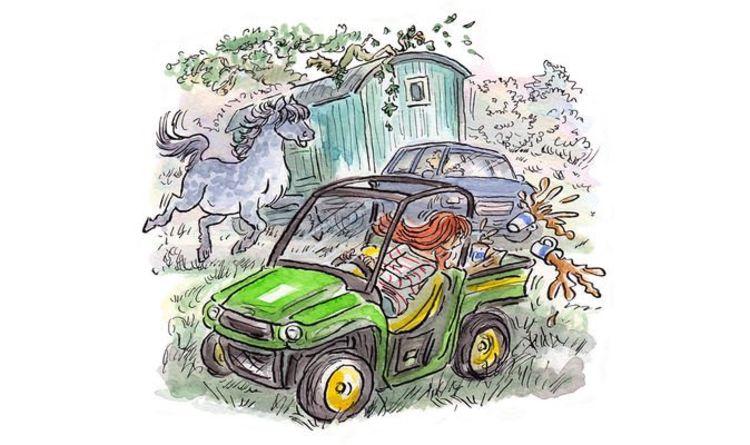 Oh those romantic whims of bygone days, when I dreamt of living in a gypsy wagon; me, a horse and a dog, happy together ambling through the countryside… The dream was almost realised last September when my long-awaited shepherd’s hut was finally ready for delivery. But after weeks of torrential rain, its  traditionally made solid metal wheels were never going to make it across a muddy field without sinking and getting stuck in the mire.

The plan had been to lay a small concrete slab for the hut to stand on, but even that was delayed as the foul weather meant our contractor couldn’t get to the site until he had fulfilled other outstanding jobs. Worse still, even if he could prepare the site, I discovered the delivery vehicle could only unload on to hard ground, so the hut might end up stuck at the stable yard.

My hut had been waiting for 10 months, the summer was almost here and I was getting desperate. Then, by chance, a few weeks ago our contractor visited a friend of ours, H, to have one of his diggers fixed, and in conversation mentioned he was hoping to get to us at some point to prepare the area for the shepherd’s hut (among other things).

H happened to speak to Richard the next day and volunteered his services. He could collect the hut on one of his lorries and get it safely to the site the following week. Amazing. I had never mucked out so quickly – all stables clean, hay nets done, feed ready and even field ponies sorted within 50 minutes and in time for H’s arrival. Our fabulous neighbours let us unload the hut in their farmyard before H hitched it to his 4×4 and crept through the stable yard gates. The next bit was treacherous. The hut was to be sited next to the big pond in the field and the only route was 200 yards along a rutted and bumpy track. As H picked his way along the baked mud, his overall-clad guide walked ahead to point out obstacles or unseen holes (he really should’ve carried a red flag), while Izzy and I hopped into the truck and zoomed through the grass to await their arrival.

The little convoy inched its way past Finn in his field, who grew very excited. To Finn this looked like an enormous horse trailer – was someone new arriving? He snorted and trotted and followed the hut’s progress keenly, but was disappointed when nobody responded to his whinnies, and with no sign of movement from inside, the big trailer disappeared.

One of H’s vans followed in slow convoy, with ready-made steel plates for the hut to stand upon when it reached its resting place under the trees. But with a ditch on one side, pond on another and trees blocking the exit, there was no way of manoeuvring the hut into position. As we all scratched our heads, H lurched forward towards the muck heap, and with a shout of, “No ditches in there, Mindy,” was off! He put in a wide turn and, as we held our breath hoping the hut wouldn’t ground out or topple into a badger sett, he bumped along through the bonnet-high grass, emerging back on to the track, and soon nudged into the perfect position, ready for his gang to dig in the plates.

ByWhen it comes to wireless noise-cancelling headphones, Sony and Bose rule the roost. However, Huawei now fancies a slice of the audio action. The...
Read more
Lifestyle

By    BRIDGEWATER, VA, October 22, 2020 /24-7PressRelease/ -- What if sitting in the passenger seat is really where you learn how to drive? Releasing today...
Read more
Lifestyle

ByStaff who can make use of the discount should check their local stores opening times. When visiting a Morrisons store, there are guidelines that customers...
Read more
Lifestyle

Thanks to Bisset & Holland Plastic Surgery Patients Got a Brand New Bag!

By"The goal of Bisset & Holland is to provide the essentials recommended by plastic surgeons while also delivering a sense of warm luxury with...
Read more
Lifestyle