Comet NEOWISE producing stunning colours – here is what they mean 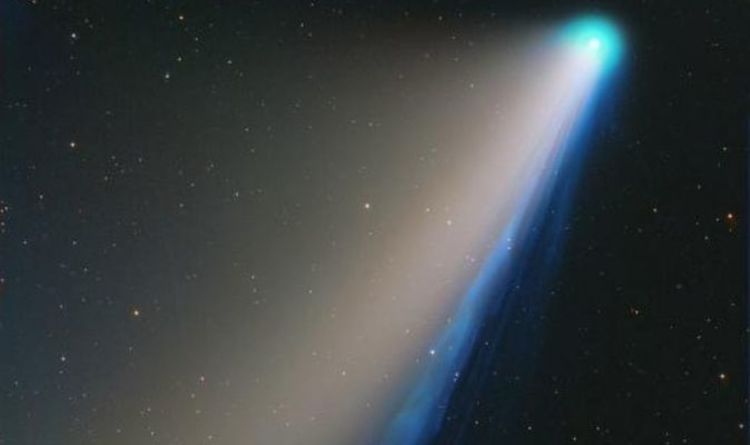 Comet NEOWISE has been mesmerising stargazers across the northern hemisphere as the giant ball of ice produces a stunning gaseous tail visible to those of us on Earth. So clear are the colours coming from the comet, astronomers have been able to determine what exactly the icy rock consists of.

As comets approach the Sun, the chemicals react to the heat producing an array of colours.

According to astronomy site Space Weather, the comet’s head is green, meaning diatomic carbon, C2, is present which “emits a verdant glow in the near-vacuum of interplanetary space.”

The tail of the comet is blue, which shows one of the most abundant gasses in the comet is carbon monoxide (CO).

Space Weather said: “When CO flows away from a comet’s nucleus, it is ionised by solar UV radiation. Carbon monoxide ions (CO+) glow blue when they recapture electrons from the solar wind.”

The dust tail of the comet is yellow, which is just a reflection of the Sun’s light.

Space weather stated: “The two tails are nicely separated, revealing their individual colours because they are guided by different forces.

“The gaseous ion tail is shoved directly away from the Sun by solar wind; it acts as a kind of interplanetary windsock. The heavier dust trail, however, isn’t so easily pushed around.

“Specks of dust are like bread crumbs dropped on the comet’s orbit; they curve away from the ion tail, tracing the comet’s ‘footsteps’ instead of the local breeze.”

Some scientists have warned Comet NEOWISE could be the last comet which could be visible to the naked eye.

Light pollution is increasingly making it difficult for astronomers and amateur stargazers alike, as artificial lighting is constantly on the increase, a team of researchers say.

According to the Natural History museum, light pollution caused by artificial lighting is increasing by an average of six percent a year.

And as things get lighter here on Earth, the sky at night seemingly gets darker.

Gareth Dorrian, post doctoral research fellow in Space Science at the University of Birmingham, and Ian Whittaker, senior lecturer in physics from Nottingham Trent University, said everyone should take advantage of the current comet, the first to be visible from Earth since the 90s, as it could be our last.

DON’T MISS
Comet NEOWISE: Sensational comet is starting to fade – Don’t miss it
How to see Comet NEOWISE – Top tips from NASA
End of the world: NEOWISE, asteroid and Ring of Fire eclipse a ‘sign’