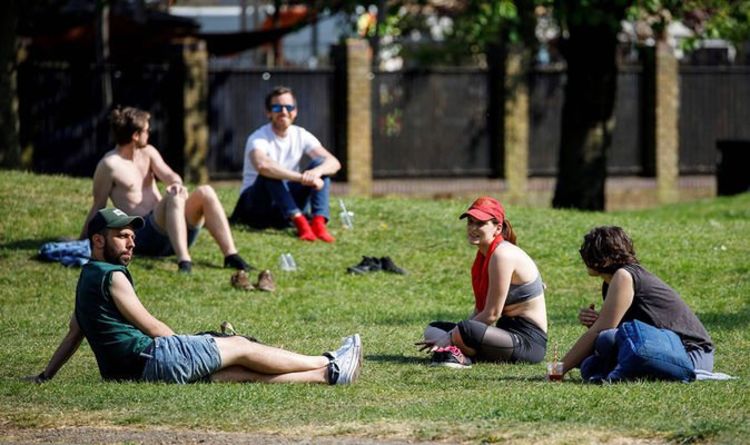 Critics claim the restrictions are confusing, will keep families apart and are unenforceable. The changes forbid “mingling” but sports, weddings and some protests are allowed. No 10 insisted it had to act to curb the spread of the killer disease and urged the public to keep playing its part in keeping the nation safe.

Boris Johnson’s spokesman said police would use their discretion on first time offenders in the next couple of days but will come down hard on those who are regular rule-breakers.

He said: “What you would expect to happen is for the police to be out today encouraging people to follow the new rules but in the coming days, if we see people continuing to flout the new rules, it is right that people could face a fine.

“The regulations are in place to help to stop the spread of the virus, to protect the NHS and to ultimately save lives.

“What we want people to be focused on is following the new rules and ensuring that they, themselves, help again as they have in the past to slow the spread of the virus.”

No 10 said there had been “egregious flouting of the rules” over summer, with some people holding large house parties.

It believes the new six-person limit makes the law clearer for police and the public.

But police were braced for the rules to be broken as temperatures soared across the country.

Police have the power to break up groups and offenders will face fines of up to £3,200.

Home Office minister Kit Malthouse said anyone with concerns about groups of seven or more should call the 101 non-emergency police line.

He said: “We are in discussions about what reporting mechanisms there might be, but there is obviously the non-emergency number that people can ring and report issues they wish to.

“It is open to neighbours to do exactly that through the non-emergency number, and if they are concerned and they do see that kind of thing, then absolutely they should think about it.”

Mr Malthouse said he had cancelled his own child’s birthday party to avoid breaking the rules.

“You cannot meet socially in groups of more than six in England and that includes children,” he added.

“While I understand that people will say ‘they are mixing in school anyway’, this is not about eliminating contact, it’s about limiting contact.”

Labour leader Sir Keir Starmer, above, who is self-isolating after a member of his household showed possible coronavirus symptoms, said that he supported the rule of six restrictions.

“I think you need something simple, easily understood and I think the Government was slow back in February and March to appreciate the problem it was about the face and we can’t repeat that error again, so I do support the rule of six,” he said.

“We’ve publicly come out in support of it and I will say, as I said to the Prime Minister I would, as the leader of the Opposition I say to everybody, please follow the Government advice, please follow these rules.”

To find out about coronavirus in your neighbourhood, please fill in your postcode below.

He added: “You can make the argument of why not five or why not six or seven – you have to go with a number backed by the science and they say six and I think we should abide by that rule.”

The new laws in England forbid any social gathering of more than six people indoors or outside and the total includes all age groups, unlike in Scotland and Wales where younger children are not counted.

But schools and workplaces are exempt and team sports can still go ahead under the changes in England. Small weddings and funerals attended by up to 30 people are also allowed.

Seven or more people can gather indoors for settings operated by a business, charities and public bodies but only in groups of up to six.

Mr Cameron revealed he held the fort at home and spent a couple of days a week volunteering. He told Times Radio: "I was...
Read more
U.K.

Infection rates have been soaring across the UK with another 3,395 people diagnosed on Thursday. Hospital admissions due to COVID-19 have started to increase again...
Read more
U.K.

Earlier this week, MPs voted on a controversial new bill published by the Government. The UK is currently in a transition period that keeps...
Read more
U.K.

This week, the Government has challenged previous commitments with the European Union, increasing the odds of a no deal outcome at the end of...
Read more
U.K.

Brighton Aldridge Community Academy on Lewes Road, was closed this afternoon amid reports of a man carrying a weapon close by. A helicopter was...
Read more
U.K.

'Wake up!' WHO criticises UK coronavirus strategy and warns infection rate is 'alarming'

The World Health Organisation (WHO) has said it would not reduce its two-week recommendations for self-isolation after several European nations slashed the amount of...
Read more