Concert for the dead goes online 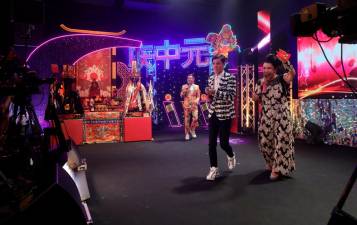 THE studio lights dim, the band begins to strum, and it’s showtime for a Singapore getai concert – a popular form of entertainment in southeast Asia that features songs, skits and over-the-top costumes to celebrate the dead.

Because of the coronavirus, instead of being watched by a live audience of thousands, the performance is taking place in a studio and broadcast over the internet.

The livestream is a lifeline for performers like Febe Huang, who earns her living staging getai with her husband across the region.

“When this pandemic hit, there were two or three months where we just didn’t have any income at all,“ she said. “We started selling things online so we had a little bit of a salary. And now this livestreamed getai has started.”

Getai shows are mainly held during the Hungry Ghost Festival in the seventh month of the lunar calendar, when spirits of the dead are believed to return to wander the Earth. Performers say without the thrill of a live crowd, it’s not quite the same.

“Every year it’s the same feeling — when the Hungry Ghost Festival comes, (everyone) is very happy. But this year just feels a bit empty.

Ahead of a performance in a recording studio this weekend, caretakers from temples had brought in statues of deities. There were food offerings for the gods, with cans of Guinness beers and a bottle of Martell Cordon Bleu cognac.

The livestreamed getai have kept performers in the spotlight at a time when so many other entertainment events are cancelled.

Developers Psyonix has confirmed its plans to launch the big Rocket League free-to-play update this week. We already know that a ton of changes...
Read more