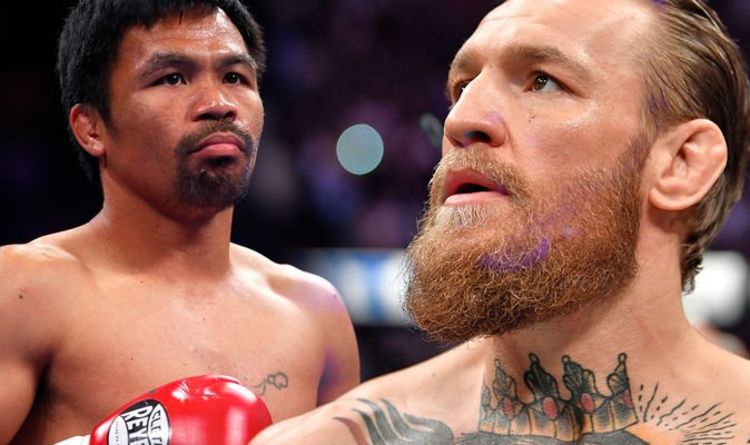 Conor McGregor has declared he will fight Manny Pacquiao next in the Middle East as he eyes a sensational return to boxing. The UFC star caused quite a stir on social media this evening, when he released a series of tweets confirming his desire to return to action, challenging the Filipino.

McGregor started off by posting a series of private messages exchanged with Dana White, in which he outlined his wish to fight Diego Sanchez in Dublin.

The Notorious was last in the octagon in January, when he beat “Cowboy” Donald Cerrone in Las Vegas.

Now he is working hard to get in shape and it appears he is willing to switch back to boxing in order to speed up his return.

Incredibly, McGregor claimed he is now set to take on the legendary Pacquiao. He tweeted: “Anyway all water under the bridge who gives a fook. I’m boxing Manny Pacquiao next in the Middle East.”

McGregor appeared to be agitated that his attempt to arrange another comeback fight was unsuccessful.

The 32-year-old has announced his retirement from UFC in June for the third time in four years but he is now itching to get back and do what he does best.

It remains to be seen whether McGregor will actually meet with Pacquiao but White has already made it clear he intends to get involved in boxing promoting.

This would be a some spectacle for combat sport fans around the world, who have already seen McGregor in action against Floyd Mayweather in 2017.

He also trolled his former rival, tweeting: “It will be a true honour to have faced two of the greatest boxers of the modern era, afraid of a fight.”

In Pacquiao, McGregor would be set to face an eight-weight world champion with 62 wins to his name.

The 41-year-old veteran has not been in action since he outpointed Keith Thurman to defend his WBA Super Welter world title at the MGM Grand.

McGregor appeared to tease last month that a fight with Pacquiao could be about to come to fruition when he tweeted the word “accepted” in Tagalog, the language used in the Philippines.

He also recently videos of shadow boxing as he eyes a return to the ring following a difficult year.

Earlier this summer, McGregor revealed his embarrassment at his own technique when re-watching footage of his fight with Mayweather three years ago.

“I actually look at the Mayweather [fight], the shots on the bag and the way I was punching and I actually can’t even watch that,” he said.

“I shiver when I see the way I was throwing my punches back then. I just wasn’t sitting right on them, just floating through the air.

“Now I’m getting into positions and sitting in. Got to go through everything to learn, to truly learn. Experience is the best teacher of all.”