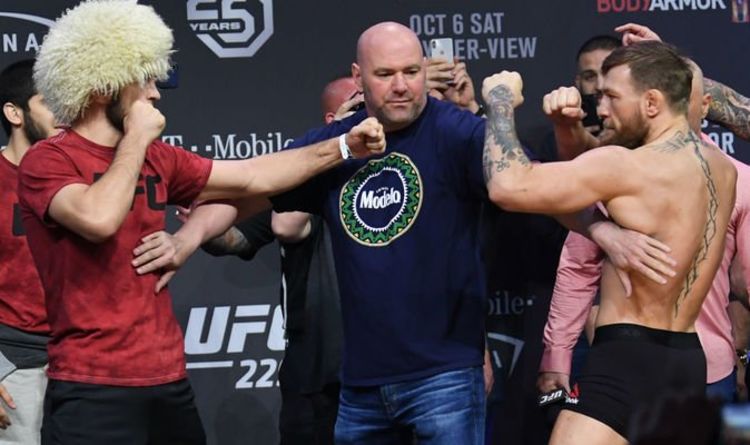 The UFC will likely try and entice Khabib Nurmagomedov to have a rematch with Conor McGregor before he hangs up his gloves, the Russian’s head coach Javier Mendez believes. From the outside looking in, it appears Nurmagomedov’s time as a competitive mixed martial artist is drawing to a close.

After 13 years as a pro, Nurmagomedov has amassed a perfect record of 28 victories and zero defeats – a truly unfathomable feat at this juncture of the sport’s development.

A perfect 30-0 record is within touching distance for the pride of Dagestan, who has made no secret of his desire not to continue fighting deep into his thirties.

The road to 30-0 is crystal clear for Nurmagomedov: defeat Justin Gaethje at UFC 254 in October and take out recent Hall-of-Fame inductee Georges St-Pierre in April 2021.

The UFC, however, have reservations about booking the latter match-up, although Dana White’s stance on the fight has softened somewhat.

JUST IN: Jorge Masvidal vs Nate Diaz II in the works for January

Although he’s more open to a Nurmagomedov vs St-Pierre bout than when it was first pitched to him, White is still not sold on the idea. Especially when he still has the ace that is the most lucrative rematch in MMA history up his sleeve.

Given the immense financial reward for the promotion, it would behoove White to do his utmost to book Nurmagomedov vs McGregor II before the former brings the curtain down on his career.

And with that in mind, Mendez believes the UFC chief will make a serious attempt to convince the promotion’s lightweight champion to share the cage with his bitter rival again.

“If I’m the UFC and I’m the president, I’m not going to let that fight off the table,” the American Kickboxing Academy head coach told Express Sport.

“Especially if Conor wants to fight and Khabib is still the champion. Then you can make that fight.

“I wouldn’t let them [not fight]. That’s my job, right? To make the most money for the company.”

Although Nurmagomedov’s first meeting with McGregor wasn’t the most competitive of contests, Mendez, like many others, believes there’s still a big demand for the rematch.

He said: “Let’s put it this way: If that makes the most money out of anybody, then that means it’s the most interesting fight people want to see. Correct?

“Obviously I would think everybody still wants to see that fight. Otherwise, why would they pay for it. That’s why I think the UFC would do that.”

Whether Nurmagomedov agrees to rematch McGregor is another matter entirely.

Ever since their October 2018 grudge match, ‘The Eagle’ has been adamant his predecessor at the summit of the 155lbs division must amass an impressive win streak to earn a shot at redemption.

McGregor has yet to do that, so far racking up a 40-second first-round TKO victory over Donald Cerrone in January.

And with White ruling out a second 2020 outing for ‘The Notorious’, it looks like he won’t get the opportunity to complete his “season” and fulfil his adversary’s requirement.

McGregor, 32, is currently on the sidelines enjoying his third retirement from mixed martial arts, which he announced in June.

Nurmagomedov, meanwhile, is gearing up for his lightweight title unification fight with Gaethje – which will serve as the main event of UFC 254 on October 24

MUST READ: Conor McGregor explains why he’s left Khabib out of GOAT list