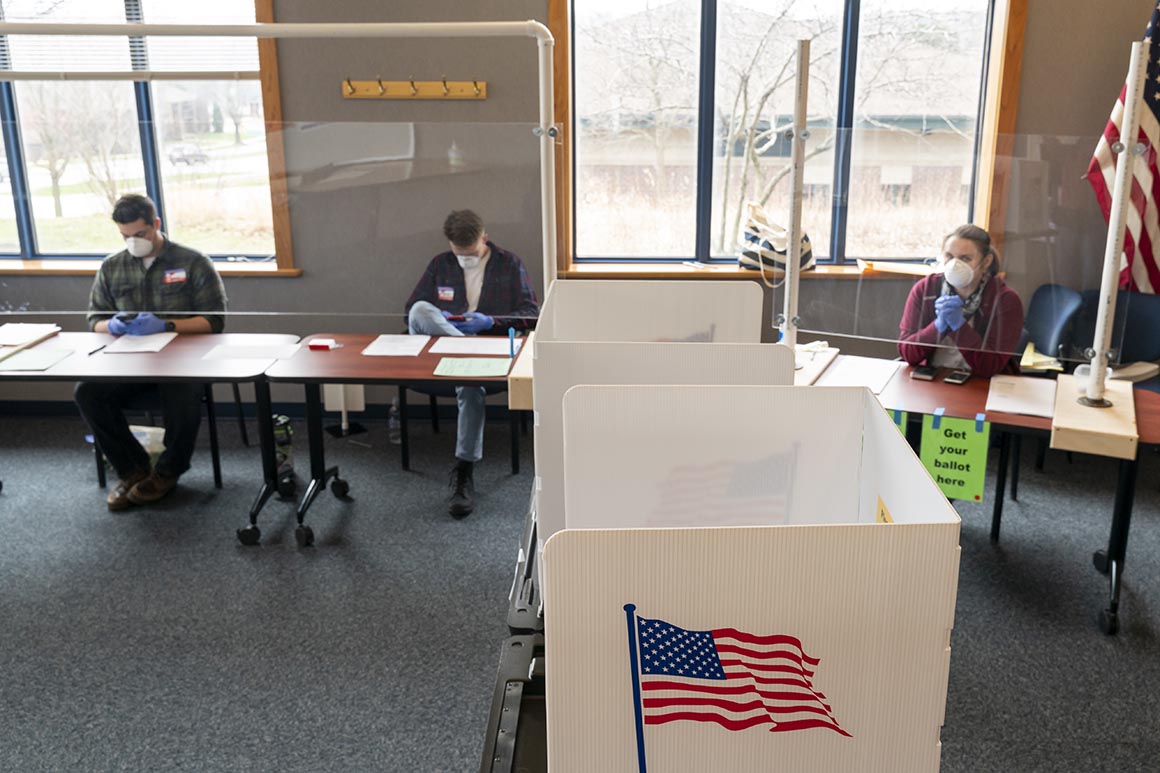 Three states will let some of their voters cast ballots online in the coming weeks — a trend that has gained momentum from the coronavirus pandemic but threatens to introduce new security risks into the nation’s already vulnerable elections.

Delaware said this week that it will allow residents with disabilities to vote online during its June primaries, while New Jersey said it would do the same for this month’s nonpartisan municipal elections. West Virginia, whose primary is also in June, previously announced plans to offer internet voting for overseas residents, military service members and voters with disabilities.

The modest increase in internet voting is yet another example of how the pandemic has upended priorities across the United States, four years after Russian hacking inspired a nationwide effort to deploy more secure, paper-based voting machines. Now, the virus is turning in-person voting into a health risk — and some election officials are exploring online voting as one alternative, despite extensive warnings from cybersecurity experts that the technology poses dangers no one has been able to solve.

“I hope that other states will exercise caution rather than jumping on the bandwagon,” said Dan Wallach, a computer science professor at Rice University who helps draft federal voting-system standards. “We need to defend our elections against nation-state adversaries. Moving toward online voting is the wrong direction to defend our democracy.”

Lawrence Norden, director of the Brennan Center for Justice’s election reform program, added, “While I understand the temptation, particularly when vendors are pushing this solution and election officials are under tremendous strain, we must resist it.”

Wallach, Norden and more than 70 other experts signed a letter to state officials this month warning them not to adopt internet voting in the midst of the pandemic.

“At this time, internet voting is not a secure solution for voting in the United States, nor will it be in the foreseeable future,” they said in the letter, organized in early April by the American Association for the Advancement of Science.

But states may not heed that advice, especially if the public urges them to ignore it. According to one recent survey, 49 percent of Americans support internet voting.

NPR initially reported Delaware’s decision to use the online system, provided by a Seattle company called Democracy Live. Officials there and in New Jersey later confirmed their plans in comments to POLITICO.

State officials say they’re trying to guarantee all eligible voters’ constitutional rights in the middle of an unprecedented public health crisis, especially as the pandemic has forced more than a dozen states to postpone their primaries and created uncertainty about how to conduct the November election safely if the outbreak is still raging then.

"If you’re doing an all-[vote-by-mail] election, you have to provide an alternative for disabled voters,” said Alicia D’Alessandro, a spokesperson for New Jersey Secretary of State Tahesha Way, whose office canceled in-person voting for this month’s municipal contests.

But the experiments with online voting run counter to years of efforts — backed by $ 805 million in recent federal grants — to help states and counties switch to more secure election technology based on paper ballots. Those efforts gained new urgency in recent years as U.S. law enforcement and security officials accused Russia of waging an extensive effort to probe and hack state and local election offices, voter registration databases and technology vendors in 2016.

Still, the internet’s increasing prevalence in daily life has led many Americans to question why they aren’t already voting online. Proponents of the idea often argue that if people can bank online, they should be able to vote that way too.

That argument makes voting security experts want to tear their hair out. Elections pose unique challenges, they say, including the legal and political impossibility of routine do-overs and the need to keep voters’ choices a secret. The financial system requires transactions to be linked to people’s accounts; the electoral system requires votes to be disconnected from voters’ identities. And while banks must constantly deal with financial fraud that requires the reversal of transactions, election results cannot be overturned nearly as easily.

“Every year billions of dollars are lost to online theft, cyberfraud, and malicious hacking, despite huge sums invested in trying to secure those systems,” wrote Susan Greenhalgh, a senior adviser on election security at the activist group Free Speech for People, and Hans von Spakovsky, a senior legal fellow at the Heritage Foundation. “Financial institutions can (and do) factor the expected level of fraud into the cost of doing business, but we can’t do that with elections.”

Internet voting vendors and their supporters dismiss experts’ arguments as the protestations of hidebound, myopic worrywarts. Some of them have even impugned experts’ motives.

“Everyone who doesn’t want this to happen is never going to say, ‘We oppose mobile voting because we don’t want higher turnout,’” Bradley Tusk, a philanthropist who has funded some internet-voting pilot projects, told NPR in January. “They’re going to say, ‘It’s not safe.’ And if we have proven 30, 40, 50 times over that it is safe, it’s a lot harder for those objections and arguments to fly.”

In fact, the evidence consistently demonstrates that internet voting platforms are unsafe.

The most prominent mobile-voting provider is a small Massachusetts company called Voatz. West Virginia used Voatz’s app in 2018 for its first-in-the-nation test run. On its website, Voatz says that security “has been our utmost priority since day one.” But audits by the Massachusetts Institute of Technology and the security firm Trail of Bits revealed multiple serious flaws and vulnerabilities, including some that left votes visible to interlopers and exposed them to tampering. Voatz largely dismissed the findings, but West Virginia ditched the company in favor of Democracy Live for its upcoming primary.

Experts see Voatz as a cautionary tale. “We simply don’t have the technology to vote online securely, as illustrated by the dramatic security problems recently discovered in Voatz and other Internet voting platforms,” said J. Alex Halderman, a computer science professor and leading voting security expert at the University of Michigan.

Democracy Live, the company providing Delaware’s new system, has tried to sidestep the controversy by contending it does not offer internet voting, even though its system allows voters to obtain, fill out and cast their ballots online using a computer, tablet or phone. Because election officials eventually print out the digitally transmitted ballots, the company says, the process involves a paper element and should not be described in terms that suggest an internet-only system.

“Really what this is, is a secure portal. If anything, it’s a document storage application,” Bryan Finney, the company’s chief executive, told NPR. “When people think of online voting, they’re thinking it’s all being tabulated online.”

On the product page for its OmniBallot Online system, the company reiterates that “the ballot that is counted and tabulated is on paper.”

Anthony Albence, Delaware’s election commissioner, made the same argument when defending his state’s use of the Democracy Live system.

“The system is not internet or online voting,” he told POLITICO. “When [the] Elections [Commission] downloads the voter’s marked ballot, a printed ballot is always generated for tabulation.”

But that assurance is meaningless, the security experts say. Because voters fill out the ballots electronically and submit them over the internet, there is no way to prevent third parties from tampering with them before they reach the election office for printing. In case of a recount, the only paper trail in existence would be of questionable value.

Hackers could install malware on a voter’s computer, tablet or smartphone that silently changes vote choices when the vote clicks the “Submit” button. “The best security people have no idea how to solve that problem,” said Wallach. “We just don’t know what to do.”

Even if the device used to fill out the ballot isn’t infected, the ballot is vulnerable as it travels across the internet on its way to the election office. “How do we know that the bits that went into the browser or the smartphone are the same as the bits that came out on the other end?” Wallach asked. “What if there’s malware somewhere in the middle doing tampering?”

While this outcome may seem unlikely, experts warn that nation-state hackers are motivated enough to devote immense personnel, resources and time to exploiting the vulnerability — and talented enough to often succeed.

Researchers are developing ways to technologically verify that a ballot hasn’t changed between submission and receipt, but that technology isn’t ready for internet voting, Wallach said.

Pressed on the fact that Delaware’s system receives votes over the internet, Albence said, “I don’t agree with that description.”

In New Jersey, which has switched to universal vote-by-mail for its May 12 municipal contests, voters with disabilities will be allowed to request internet ballots if they need them. New Jersey, like Delaware, is using Democracy Live’s platform.

New Jersey is not planning to allow internet voting in its July presidential primary, but D’Alessandro, the election office spokesperson, said the limited rollout in May “is essentially a pilot for if we need to use it more broadly in the future.”

Cybersecurity experts say they understand election officials’ desire to make voting safer and easier, especially for people with disabilities, many of whom cannot use pencils or read paper ballots. But they say that internet voting isn’t necessary to achieve those goals.

The AAAS letter urged states to expand vote by mail as the default option, and Wallach proposed a secure alternative for people with disabilities: filling out a ballot on a computer, printing it out, reviewing it to make sure that no computer malware changed their choices and then mailing it in. Democracy Live’s system already supports that arrangement.

“As long as we have a U.S. Postal Service, then we don’t need internet voting,” said Wallach. “And that includes accessibility features.”

Some election officials have watched with concern as their colleagues have explored internet voting. “When they look at technology solutions, they [see] a lot of solutions that look very enticing,” said Washington Secretary of State Kim Wyman. “From a pure technology standpoint, it becomes a very viable solution because you think, ‘Wow, this is going to be so much more efficient.’”

But Wyman learned otherwise when she oversaw an internet voting trial in 2000 as elections director in Thurston County, Wash., and since then, she said, federal experts have warned her and her colleagues against the technology. “They don’t believe that any of them are secure and that you can guarantee that you didn’t have a disruption,” she said.

Tim Starks contributed to this report.