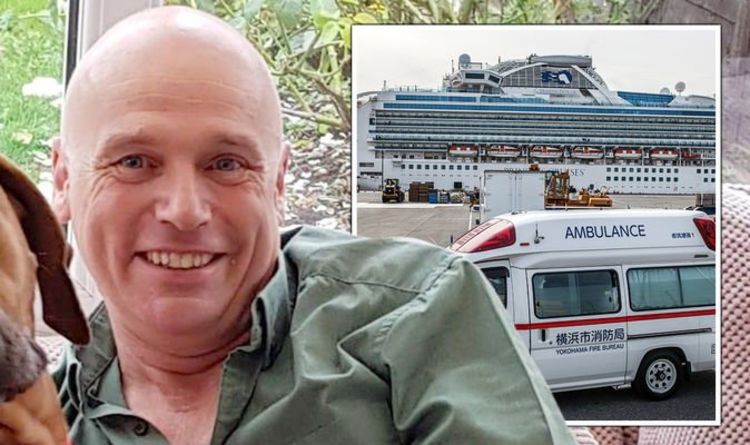 The male passenger is thought to have been celebrating his honeymoon on the luxury liner and was one of 41 people who tested positive for the flu-like virus today. Fellow British holidaymaker David Abel, who has been posting regular updates from the ship on his Facebook page, said: “One of the disconcerting things, one of the people we have been dining with, during the duration of the cruise for our evening meals – because we are a table of six and all Brits – one of them has been proved positive for the virus and he will be most certainly leaving the ship today.”

Mr Abel continued: “It’s a real, real shame. Now, I have no idea how he must be feeling.

“I don’t want to mention names because that wouldn’t be right at this present stage, but they are on their honeymoon.

“He will be going off into quarantine in a medical facility and she has to stay on board the ship because she is not displaying symptoms.”

A Reuters TV journalist Mayu Yoshida, based in Japan, confirmed a UK national was among those newly diagnosed and said one of the 61 is in a critical condition.

She said the nationalities of those infected also included American, Canadian, Argentinian, Australians and Japanese.

The number of confirmed cases aboard the vessel has now risen to  61 with thousands of passengers confined to cabins as screening is carried out.

The Diamond Princess and is 3,700 passengers and crew have been on lockdown since arriving back at the port of Yokohama, south of Tokyo, on Monday after a man who disembarked in Hong Kong was diagnosed with the virus.

The outbreak, which has killed has almost 640 people in mainland China but only two elsewhere, has stoked concern about the Tokyo 2020 Olympics, which begin on July 24. Games organisers have set up a task force to coordinate with health authorities on how to respond to the epidemic.

Video footage showed blue and white tarpaulin put up on the Diamond Princess to screen passengers from view as those diagnosed with the virus were moved out to hospitals in Tokyo and neighbouring towns, the health ministry said.

The increase in the number of infections has added to the gloom for passengers stuck on the ship, who were only allowed onto open decks briefly for fresh air.

Internet bandwidth had been increased and passengers were finding out about the new infections from the internet before they were announced on the ship, a 43-year-old Hong Kong resident, on the ship with his family, told Reuters.

Staff distributed thermometers and passengers were told mental health experts were available, over the telephone around the clock.