Coronavirus: Britons may travel abroad this summer as quarantine rules could be relaxed 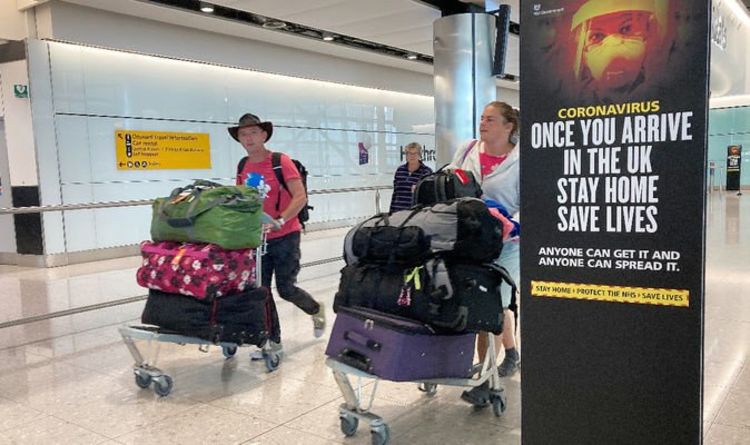 The Health Secretary said he was growing more optimistic about the prospect of holidays abroad. But he added: “Clearly the number one priority is keeping the public safe.” The Government is considering introducing “air bridges” to low-risk sunshine countries so tourists can skip 14 days of self-quarantine when they return to the UK. Home Secretary Priti Patel is expected to set out the controversial quarantine scheme today – amid calls for it to be scrapped within weeks.

The plans will see people arriving in the UK told to isolate to prevent a second devastating wave of cases being introduced from overseas. Anyone who does not comply could be fined £1,000.

But Tory MPs and tourist industry chiefs warn the move will bring economic disaster without drastically increasing public safety. Bosses of Britain’s biggest travel and hospitality businesses warned they will have to lay off up to six in 10 of their staff if the quarantine goes ahead.

There are growing rumours the plan could be tweaked within weeks of being introduced on Monday. Industry leaders warned of a devastating impact even if agreements are reached with popular holiday destinations such as France, Spain, Italy and Greece.

The survey of bosses – who account for £5billion worth of sales – found that 71 percent expected to make 60 percent of their staff redundant if quarantine begins on June 8. Henry Smith, the Crawley MP whose constituency covers Gatwick airport, said he hoped the quarantine measures could be short-lived.

He added: “Making sure this quarantine is reviewed in the next few weeks with a view to hopefully being dropped by July 1 is probably the most practical way forward. “It really feels like it will bring limited public health benefit for a lot of economic pain.

“There were already some absurdities to the idea, like backdoor routes where you would not be checked.”

The Prime Minister’s spokesman said what people are allowed to do under quarantine rules would be similar to lockdown rules.

He said: “I would expect people only to be able to leave the property in which they are quarantining if they need urgent medical treatment, support from social services, food or medicine which they cannot get delivered or get anybody else to bring to them. Or there’s an emergency where they are staying – such as a fire – or to attend a funeral of a close relative.”

Travellers will also be able to board public transport from the port or airport to where they will quarantine, although they will be encouraged to use private vehicles instead. Professor John Newton, the national testing coordinator, warned it is too early to risk allowing people into the country without first ordering them to quarantine.

He said: “It’s just like in this country, if somebody might be at risk of having the virus we need them to be isolated during any period when they might be infectious.

“And if people are coming into the country, then they really have to be treated as an unknown and therefore there’s a quarantine.”

He said the exceptions would be if the risk of them having the virus is very low or if a test and trace programme could quickly cover it.

He said: “So if travellers are able to be tested and self-isolate in response to contact tracing just like a domestic new case then that would also be a way of dealing with it.”

Former transport minister Stephen Hammond wants quarantine of all people arriving from outside the UK to be scrapped. He said: “Air bridges are the right way forward. This targeted approach would be a much more sensible way to behave.”

Simon Clarke, a local government minister, said the moves to impose a quarantine were essential to stop the risk of new imported cases of coronavirus as the UK’s infection rate came down.

The MP told the BBC: “This is a temporary, time-limited measure to make sure that we avoid that risk manifesting itself.

“It is very clear that, as of Monday 8 June, a two-week quarantine is in place for people coming into the UK from abroad.

“It will obviously depend on progress and we all want these restrictions to be lifted as soon as it’s safe to do so.”

George Morgan-Grenville, CEO of tour operator Red Savannah, said: “By pursuing its quarantine plans without due regard for the economic consequences, the Government is choosing to ignore the devastation it will cause to companies, to employment and to the lives of all those whose jobs will be lost.

“The quarantine measures are a blunt weapon which will bring only economic disaster.”