Coronavirus FAQs: Is There A Polite Way To Remind Someone To Follow Pandemic Rules?

Each week, we answer “frequently asked questions” about life during the coronavirus crisis. If you have a question you’d like us to consider for a future post, email us at goatsandsoda@npr.org with the subject line: “Weekly Coronavirus Questions.” 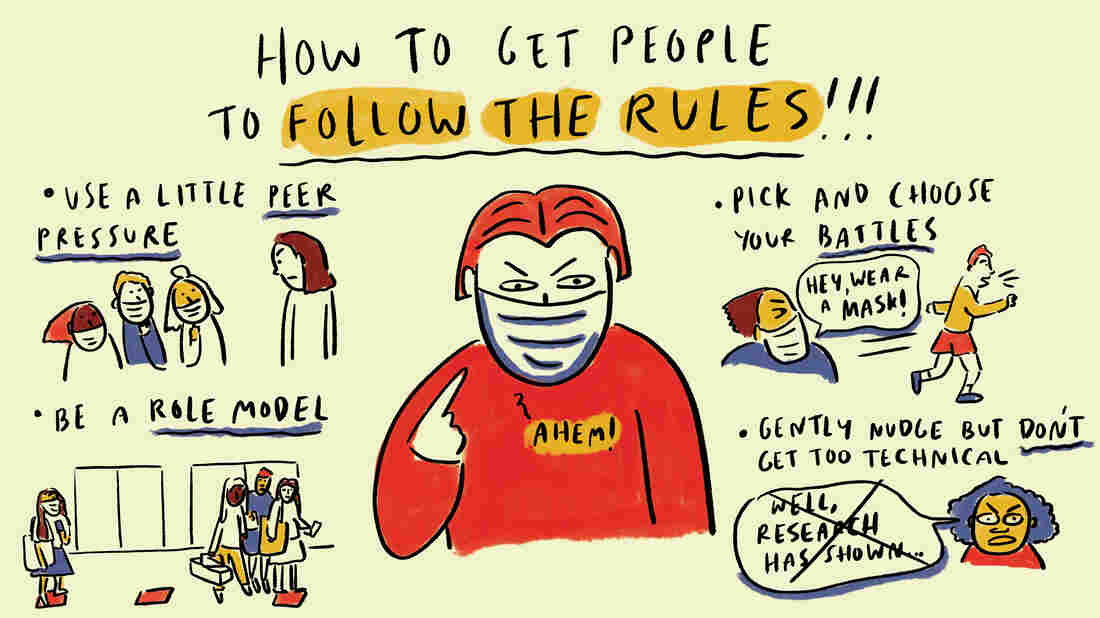 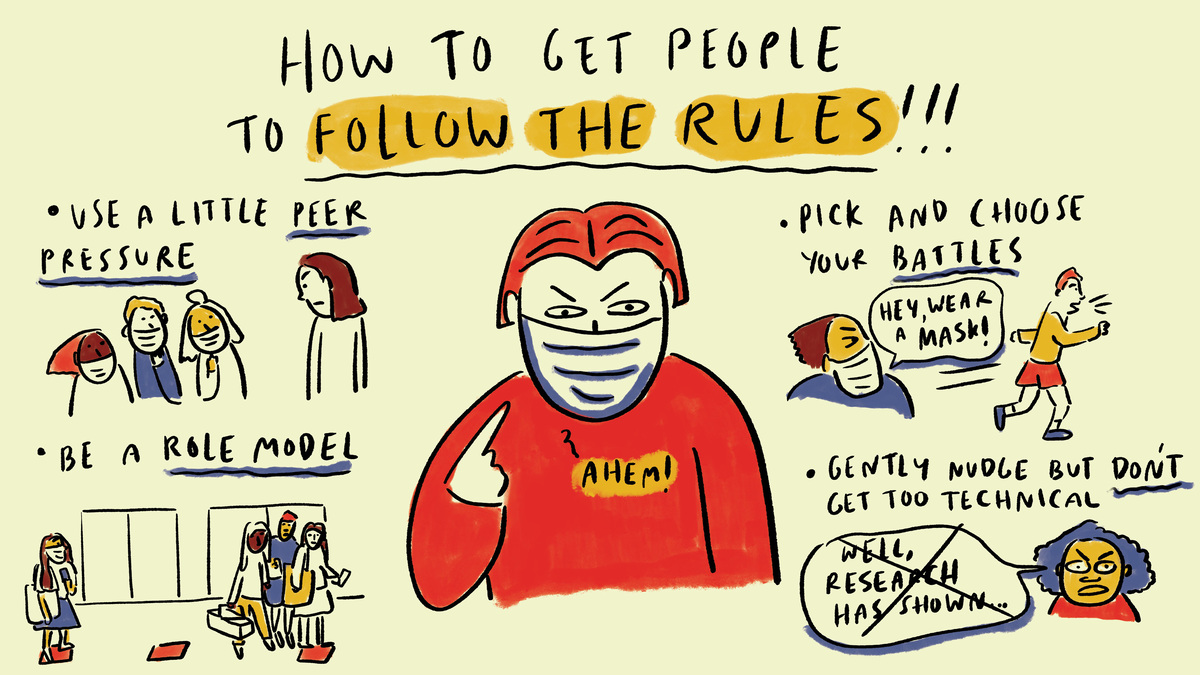 At the farmer’s market I saw a woman break the “do not touch what you’re not buying” guideline CLEARLY PRINTED ON A BIG SIGN and pick up and inspect a dozen plastic bags of peaches. Is there a way to politely tell someone to follow the rules?

So do you say anything — and if so, what?

Health experts agree that the etiquette of epidemics can be super thorny.

On the one hand, you care about safety and believe others ought to stick to certain rules for the well-being of the general public. On the other hand, it can be awkward to encourage others to follow health guidelines. You don’t want to come across as rude. But sometimes it really, really does feel as if the world is at stake. It is a worldwide pandemic, after all!

The key, says Dr. Paul Sax, clinical director of the Division of Infectious Diseases at Brigham and Women’s Hospital, is to find the “sweet spot” — to strike a balance between politeness and public health.

Start by choosing your battles.

Sax says it’s a good idea to channel your focus on the highest risk situations — instances where you think an individual actually poses danger to others and where you think your intervention will help. Mostly, this will apply to indoor spaces with large crowds, like markets or other public gatherings, he says. In this light, it’s probably smart to not waste energy by acting on lower-risk examples: maybe disregard “the jogger going by without a mask, an unmasked family having a picnic, etc.”

For public settings you’ve identified as potentially high-risk (say, our peach-touching friend at the market), think wisely about how you can convey the message in the most “non-threatening way.”

“Shaming never works — it didn’t work in past epidemics and it won’t work in this one,” says Harvard Medical School physician Dr. Abraar Karan. “The key here is to be kind and communicate your concerns clearly without stigmatizing others or making them feel like they are at fault. Personally, I would say: ‘Hey there — here’s some hand sanitizer. Please use it.’ “

A gentle nudge, like “Wearing a mask protects you and others,” can go a long way, says Sax.

Furthermore, because these encounters will be in public, it’s important to not get too technical, he says. Strangers don’t want to hear you expound on epidemiological studies, and public places aren’t the correct settings for these sorts of “didactic exchanges.”

Sometimes, trying to correct the behaviors of strangers can feel awkward or pointless — in many cases, Karan says, people’s decision to not adhere to health requirements can come down to differences in beliefs and values rather than apathy or simply forgetting.

“People may not believe the data on masks and are further skeptical because of the CDC’s position change on masks,” he says. “For others, it may be a matter of ‘personal rights.'”

Exercise good judgement, our sources stress. In some cases, it’s also OK to simply make sure your mask is properly donned and try to keep your distance from the person in question — a strategy Karan says is akin to “defensive driving.”

Most of all, Sax says, serving as a role model works — think of it as “peer pressure.” The person you have the most control over is yourself. So wear a mask and follow other protocols in public to help establish those actions as social norms, pushing other people to adopt those behaviors too.

So the next time you’re at the market? Set the example you want to see. And give that peach-toucher a gentle reminder, if you feel inclined.

People who are headed back to the office are asking: Is it OK to pop off your mask for a casual conversation with a coworker? What about in conference rooms?

Health experts say the COVID-19 pandemic has opened a Pandora’s box of new considerations for proper etiquette and agreeable behavior in public settings. And the workplace is no exception.

That said, there are some overarching precautions to keep in mind when going back to a physical workplace to ensure you’re as safe as possible.

In general, Dr. Abraar Karan says it’s a good idea to wear your mask as much as possible — especially if you’re indoors and close to colleagues.

Scientists suspect that in indoor settings COVID-19 can be transmitted even when people are six feet apart, Karan says, depending on the room’s ventilation and how long droplet clouds containing viral particles linger in the air. “So — unless you are going to be in your own office completely alone, I would wear your mask.”

Dr. Paul Sax says it might be OK to remove your mask if you’re in an exceptionally well-ventilated conference room and are maintaining over 6 feet in distance from colleagues — but even that might not be enough to prevent contact with viral particles. He says it’s hard to guarantee that people won’t move around. So as a rule, it’s better to keep the mask on.

Sax adds that an especially vulnerable time can be meal breaks, a time when people must take off their masks and may be eating in close quarters like a cafeteria. He recommends taking advantage of the outdoors during the summer, where the risk of transmission has shown to be less severe than it is indoors, and sitting at least six feet apart: “There’s barely any transmission outside,” Sax says. “The virus is so diluted.”

Beyond that, try not to sweat the small stuff.

“People [should] not be too worried about briefly passing something who isn’t wearing a mask,” says Sax. “Those extremely casual passes in the hallway or especially outside are not dangerous situations at all.”

And there are always general guidelines you can follow to make sure you’re minimizing your risks — like washing your hands with soap often and using hand sanitizer.

Pranav Baskar is a freelance journalist and U.S. national born in Mumbai.