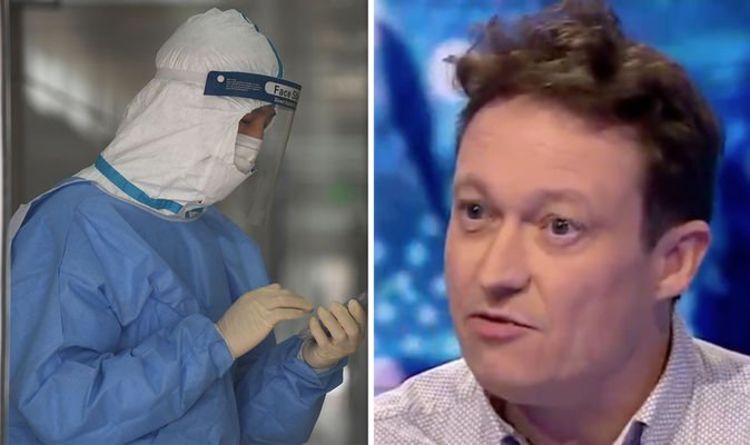 The UK currently has nine confirmed coronavirus cases spread across the country. Most recently a case was confirmed in a patient who “self-presented” to the University Hospital Lewisham A&E department.

Mr Gatehouse commented: “The thing that really leaps out from what I’ve been hearing from sources about some of this planning being undertaken by health officials at a senior level is worrying about pressures on the NHS, especially intensive care unite, that they could become unsustainable.

“ICU’s [intensive care units] are already very close to capacity, they’re expensive to run, so its not a wild leap of the imagination to think if there’s a wider outbreak they would struggle.”

Mr Gatehouse went on to claim the Government had been setting up temporary porta cabins in hospital carparks that could be used to treat coronavirus patients.

He questioned: “So what are they proposing?

Separately the BBC journalist said authorities were considering whether schools might need to be closed.

He said: “The second think that really leapt out was the question of schools.

“They did say they’ve got teams working around the clock to ensure public safety.”

The coronavirus disease (COVID-19) has so far infected more than 64,000 people since appearing in China’s Hubei Province last December.

The deadly epidemic is being treated as a global emergency as the number of cases outside of China’s borders grows.

Since the coronavirus first appeared in Hunan City last December, the virus has spread to nearly 30 countries globally.

Although the infections and deaths have been mostly contained to China, one person in the Philippines has died from the coronavirus.

The viral pathogen is transmittable between humans and may have been first spread between animals through bats or snake bites.

The disease gestates between two and 14 days, after which symptoms such as cough, fever and reacting difficulties manifest.

If the symptoms are left untreated, coronavirus can deteriorate into full-blown pneumonia, kidney failure and death.

One study suggested potentially deadly coronavirus pathogens can survive on surfaces for up to nine days.