Coronavirus France map: The top regions in France struck down by killer virus 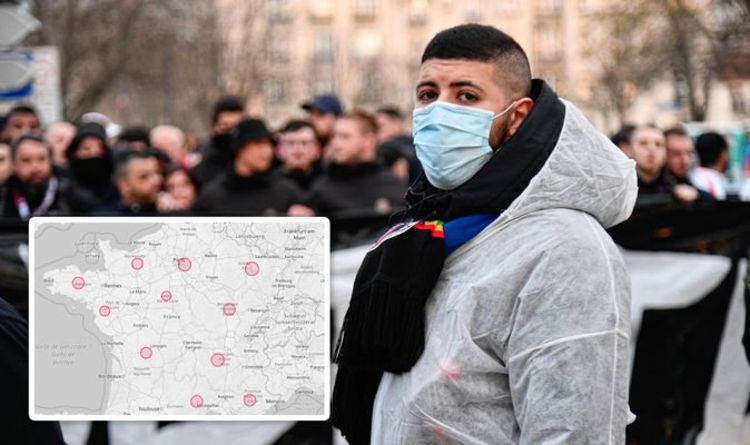 France banned all indoor gatherings of more than 1,000 people in an effort to contain the country’s coronavirus outbreak.

Health officials in France confirmed the death toll jumped to 19 as the number of cases hit 1,126.

The focal point for the outbreak in France has been the Oise département in the northern regions of Hauts-de-France, Grand Est and Île-de-France.

So far 19 people have been killed by the virus in France, with 200 new cases confirmed in the last 24 hours.

The death toll increased by eight over the weekend, with the Director General of Health Jérôme Salomon saying most of the 19 who died were elderlyor had serious underlying health conditions.

Mr Salomon said: “This is the time to protect our weakest.

“The elderly must benefit from the solidarity of the whole country.”

France is still in ‘stage 2’, according to French health authorities.

Of the 1,126 confirmed cases in France, around 1,116 patients are still currently sick, with 45 in a serious condition.

The first two fatalities in France were an elderly Chinese tourist and a French teacher, 60.

The third death was a woman, 89, who died at a hospital in Compiègne in northern France before the Brittany man brought the death toll to four.

Government’s spokesperson Sibeth Ndiaye said on Wednesday that it was, per today, “out of the question” to postpone the upcoming municipal elections in March.

France’s health minister Olivier Véran advised people to stop shaking hands and kissing due to the increased risk of passing the virus on.

But health authorities have urged everyone in France not living in the areas where there are clusters to continue to live a normal life.

The Foreign and Commonwealth Office (FCO) has issued some guidance about travel to France.

The FCO website reads: “There is an ongoing outbreak of coronavirus in China and elsewhere, including France.

“The French authorities are dealing with confirmed cases of coronavirus in the Oise, Haute Savoie and Britanny.

“If you’re in these areas you should follow the advice of the local authorities.”