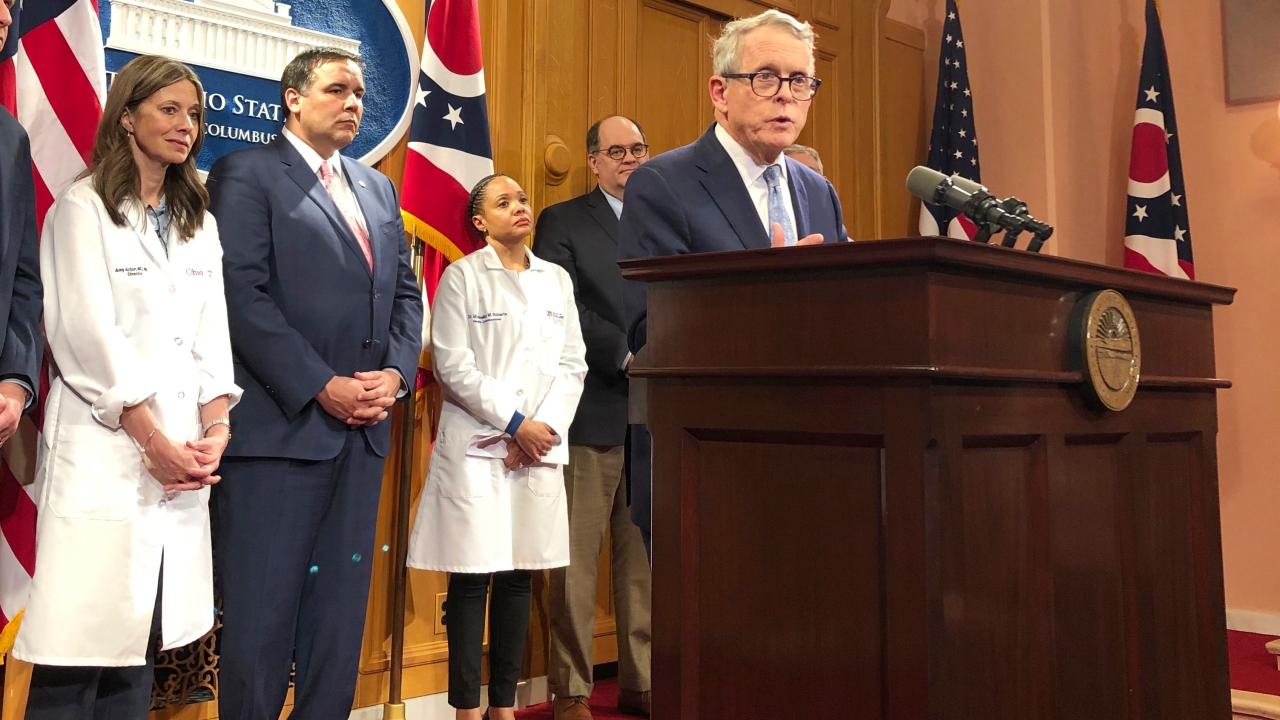 The order permits the following exceptions: sanctuary activity, health and safety, necessary supplies and services, outdoor activity, work that is deemed essential and to take care of others.

It also lists the essential businesses that will be permitted to stay open.

The order is in effect until April 6.

Sunday’s pivotal move reflects the dramatic slowdown in traffic through the airline’s hub in Dubai due to disruptions caused by the coronavirus. Dubai is home to the world’s busiest international airport.

The state-owned carrier says it’ll keep flying to the U.S., the U.K., Japan, Australia and Canada, among a few other select destinations. It’ll also continue to operate cargo flights.

The company had just hours earlier announced a suspension of all passenger flights, but said it reversed that decision after receiving requests from governments and customers to support the repatriation of travelers.

4,812 of those cases were found on Saturday. 1,974 people have been hospitalized.

Cuomo says that people between the ages of 18-49 represent 53% of the total cases in New York. He also said there were too many people gathered in public in New York City this past weekend, saying their behavior was “arrogant and destructive.”

Meanwhile, New York is working to expand existing hospital capacity, with the goal of increasing each hospital’s capacity by 100%.

The state will also implement trials of Hydroxychloroquine and Zithromax and Chloroquine for treatment of the coronavirus beginning on Tuesday.

COLUMBUS, Ohio (AP) — Gov. Mike DeWine is expected to order more closures on Sunday while the Ohio Board of Pharmacy moved to prevent hoarding of a malaria drug that President Donald Trump has suggested could treat people with the coronavirus.

The Ohio Board of Pharmacy took an emergency 7-0 vote Sunday on a regulation designed to prevent hoarding of hydroxychloroquine and a similar drug, chloroquine, that are sold around the world under a variety of brand and generic names.

The board said the rule will ensure the drugs are dispensed appropriately to patients who rely on them to treat conditions such as malaria, rheumatoid arthritis and lupus.

WASHINGTON (WJW) — Three American car companies will begin manufacturing ventilators and other metal products that can be used to aid in the coronavirus crisis, President Donald Trump says.

President Trump announced Sunday morning that Ford, General Motors and Tesla have officially been given the green light to start production.

Italy announced its biggest day-to-day increase of infections, rising to an overall death toll of more than 4,825, more than China.

In the U.S., where multiple states have ordered residents to stay indoors, New York Gov. Andrew Cuomo says the government is “literally scouring the globe looking for medical supplies.”

Pope Francis urged all Christians to join in reciting the ‘’Our Father’’ prayer next Wednesday at noon.

PARIS (AP) — People from Europe to the U.S. are ignoring orders and recommendations to stay at home to help stop the coronavirus from spreading. Now authorities around the world are urging them to start obeying and enforcement is up.

The resisters are holding corona parties in Germany, going to beaches in France, Australia and Florida and taking farm animals for walks in Spain. France has sent police to train stations to prevent people from heading to vacation homes.

New York’s governor says there’s a problem with gatherings in New York City parks. He says more than half of the state’s infected people are from 18 to 49 years old.

CLEVELAND (WJW) — There are now more than 25,700 confirmed cases of COVID-19 in the United States. At least 323 people have died from the virus, including 3 in Ohio.

Ohio Governor Mike DeWine and the Ohio Department of Health confirmed the fatalities Saturday, adding that multiple deaths are still under investigation. The confirmed fatalities were from residents from Cuyahoga, Erie and Lucas counties.

Map based on state departments of health as of March 22.

Governor DeWine also announced the statewide closure of adult day services for those with developmental disabilities, unless the facility serves 10 people or less.

Meanwhile, here in Ohio and across the nation, the need for medical supplies is great. President Donald Trump is reassuring Americans that help is on the way after he enacted the Defense Production Act this week. Hundreds of millions of masks have been ordered and are being sent to the states.

The FDA has also now approved a new, faster coronavirus test that can detect the virus in about 45 minutes. The California-based company says they can start shipping the tests next week. Clinicians say faster testing may alleviate some of the pressure on hospitals’ limited resources.

Lastly, the President reminds everyone to be vigilant in staying home to prevent further spread of COVID-19.