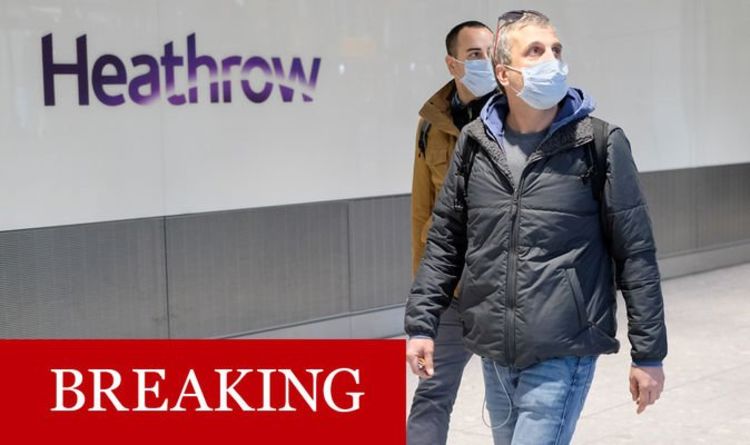 The plane, believed to be United Airlines plane – flight 901, was held at Heathrow Airport this morning after landing at Terminal 2. The captain announced to passengers that someone on board was suspected to have coronavirus, formally known as COVID-19, and no one was allowed to leave the plane. The person suspected of having the virus was isolated at the back of the plane, according to passengers on board the aircraft.

One person wrote on Twitter: “Just landed at Heathrow T2 and captain has announced that someone on the plane has suspected #coronavirus. Noone allowed to leave the plane!

“Waiting for doctor confirmation expected either way. Person isolated at the back of the plane.”

The passenger added that all passengers were then asked to fill out a form and were told they could soon disembark the aircraft.

He said: “All good. We’ve been asked to fill in a form that’s all. No people in chem suits have boarded! We’re about to deplane so I guess it’s all ok.”

Mr West, a chief development officer at PR agency Hotwire – who was on board the vehicle, said he knew something was wrong when he noticed fire engines drove to meet the plane shortly after they landed.

He told MailOnline: “We landed at about 9am and the captain came on the tannoy to say three was a suspected coronavirus patient on board.

“I think the passenger was taken right to the back of the plane, so I didn’t get to see what they looked like.

“We were told to stay sat until authorities came on board, and he [the captain] said that seven other flights had landed and had a similar situation.”

He said they were allowed off the aircraft after 25 minutes, while the sick person remained on the plane.

He added that travellers were told they’d be contacted if they were suspected of having coronavirus.

It comes after the UK announced its ninth case of coronavirus on Wednesday.

A woman, who had recently travelled back from China, is being treated at Guy’s and St Thomas’s hospital in London.

But her diagnosis has sparked fears the virus could become more widespread, as just days before turning up at A&E the woman attended a summit in central London.