Coronavirus: Heathrow Airport passengers to be screened as virus spreads around world 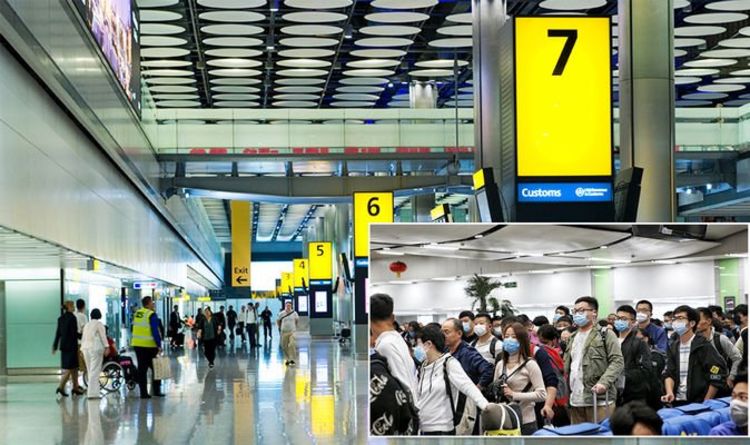 Coronavirus has spread beyond China, where it has killed nine people, sparking global health fears. At least 440 cases have been confirmed across Shanghai, Beijing, Japan, Thailand, South Korea and the USA. Coronavirus is in the same viral family as SARS and MERS, which killed a combined total of almost 1,600 people when they originated in 2002 and 2015 respectively.

There are three direct flights a week from Wuhan to Heathrow airport.

Public Health England (PHE) announced that all these flights will be met by a health team who will provide advice and support to those who feel unwell.

The team will check for symptoms of coronavirus and advise passengers on symptoms, and what to do if they become sick.

“There have been some announcements this morning about flights that come direct from the affected region to Heathrow with some additional measures there,” transport secretary Grant Shapps told Sky News.

“At the moment Public Health England have moved [the risk level] from ‘very low’ to ‘low’ but obviously we want to stay ahead of the issue so we are keeping a very close eye on it.

“Initially this is to ensure that when flights come in directly into Heathrow there is a separate area for people to arrive in.”

Further measures include passengers being encouraged to report feeling unwell via in-flight announcements.

Leaflets and information are also available across all UK airports, explaining what travellers from China should do if they experience symptoms of coronavirus.

A Heathrow spokesperson told Express.co.uk: “The welfare of our passengers and colleagues is always our main priority and we are working with the Government to support the implementation of enhanced monitoring measures as a precaution.

“We would like to reassure passengers that the Government assesses the risk of a traveller contracting Coronavirus to be low. We would encourage anyone with individual questions or concerns to refer to guidance from Public Health England and the Foreign Office.”

No cases have so far been recorded in the UK; however, Professor Neil Ferguson, a researcher at Imperial College London has said: “We can’t rule out the possibility.”

Ferguson said at a press briefing by the Science Media Centre: “Screening in the UK is not foolproof so there could be a mild case.”

Dr Nick Phin, deputy director of the National Infection Service, Public Health England, said: “This is a new and rapidly evolving situation where information on cases and the virus is being gathered and assessed daily.

“Based on the available evidence, the current risk to the UK is considered low.