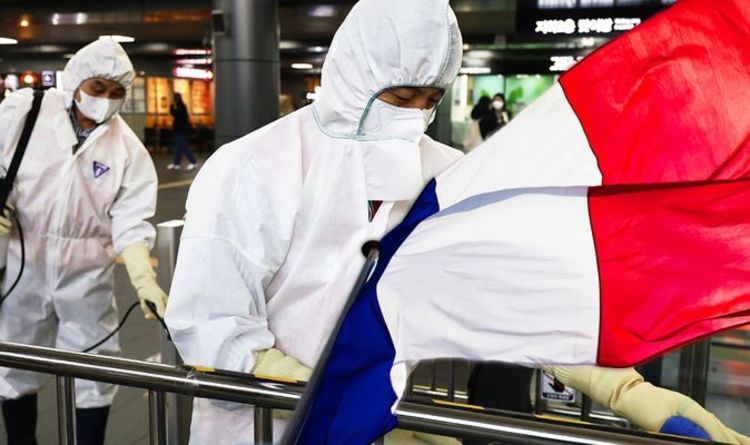 Coronavirus, first detected in the Chinese city of Wuhan, has now reached Europe as France confirm two cases. The first is being treated in the southwestern city of Bordeaux while the second has been hospitalised in Paris. French Health Minister Agnes Buzyn said during a press conference these were the first two cases in Europe and added it was likely other cases would arise in the country.

It comes as the United States confirmed a second case of the virus, after a woman in Chicago, Illinois, was found to have contracted it.

The woman in her 60s is being treated in hospital and is understood to be doing well.

She had returned from Wuhan, the epicentre of the outbreak, on January 13 and began experiencing symptoms a few days after arriving home.

She was then admitted to hospital and placed in isolation, health officials said.

At least 26 people have died in China as hundreds more have been made ill by the killer virus.

China is currently in lockdown in a desperate attempt to curb the spread of the virus, with authorities shutting part of the Great Wall and suspending public transport in 10 cities.

Meanwhile people in the UK face ongoing tests for coronavirus as the Chief Medical Officer for England said there is a “fair chance” Britain will see cases emerge.

JUST IN: Coronavirus in France: Is it safe to travel to France?

On Friday afternoon the UK Government announced 14 suspected cases had proven negative, but further people were still to be tested.

“We all agree that the risk to the UK public remains low, but there may well be cases in the UK at some stage.

“We have tried and tested measures in place to respond. The UK is well-prepared for these types of incidents, with excellent readiness against infectious diseases.”

COBRA meeting earlier today about the government’s response to the virus should it be confirmed in Britain.

Upon emerging from the meeting, Health Secretary Matt Hancock told media the clinical advice was that the risk to the public remains low.