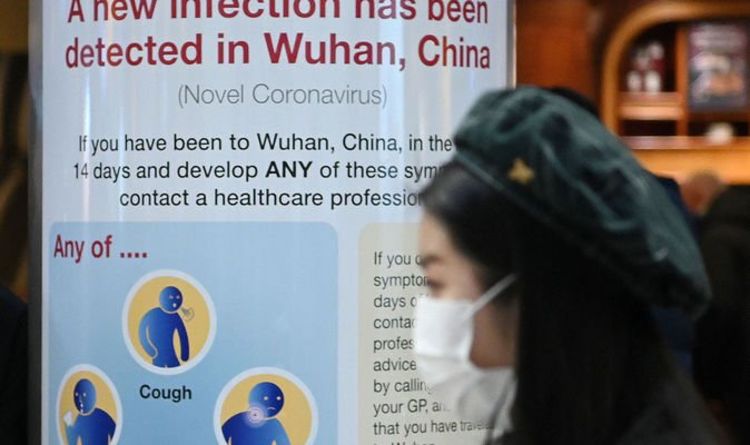 The delayed flight from China is due to touch down this morning.

It comes hours after the World Health Organisation declared the outbreak a global emergency and the UK’s four chief medical officers raised Britain’s risk level from low to moderate.

The experts said in a statement: “This does not mean we think the risk to individuals in the UK has changed at this stage, but that Government should plan for all eventualities.”

Coronavirus tests on 161 Britons have so far proved negative.

Downing Street said around 200 passengers were on the chartered flight from Wuhan, 50 of them foreign nationals.

After landing at RAF Brize Norton, Oxfordshire, the Britons will be quarantined for 14 days at Arrowe Park Hospital on the Wirral. The flight will continue to Spain.

The quarantined Britons will have access to the internet and can contact their families. Janelle Holmes, chief executive of Wirral University Hospital, told staff yesterday that the Britons would be screened for symptoms before arriving at the hospital.

WHO director general Tedros Adhanom said last night: “Over the past few weeks, we have witnessed the emergence of a previously unknown pathogen, which has escalated into an unprecedented outbreak and which has been met by an unprecedented response.”

Praising China’s efforts to contain the virus, he said: “We would have seen many more cases outside China by now, and probably deaths, if it were not for the government’s efforts and the progress they have made to protect their own people and the people of the world.”

The airlift was scheduled for yesterday, but was denied take-off clearance by Chinese authorities.

Prime Minister Boris Johnson had asked China to allow non-British partners and spouses of UK nationals to leave with them. Meanwhile, the Staycity Hotel in York was locked down last night after a Chinese visitor was taken ill and his two companions were rushed to hospital for tests.

America reported its first person-to-person case of coronavirus after a man in Chicago was infected by his wife, who had travelled to Wuhan on January 13. The couple are now in isolation.

Experts believe the virus is mainly spread from an infected person’s coughs and sneezes.