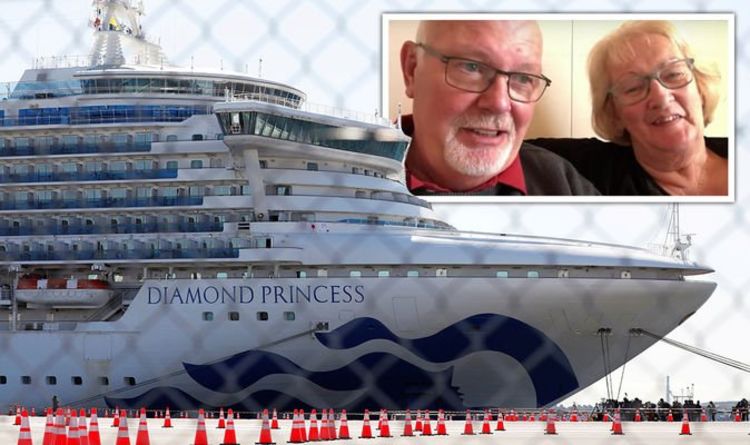 Chinese media has reported the Government will be carrying out house-to-house checks in Wuhan to seek out patients who have been infected. Anyone suspected of having the virus will be forced to undergo tests. Those who had close contact with anyone confirmed to have the virus are to be put under strict quarantine. All communities are to be put under around-the-clock “closed-off” management, in what is effectively a lock-down procedure.

The news comes as a British couple who were stranded aboard the Diamond Princess cruise ship off the coast of Yokohama have confirmed they have tested positive for the coronavirus.

David and Sally Abel, who were on the cruise to celebrate their anniversary, had been keeping contact with the outside world after being stuck on the boat for nearly a month.

Many cases of the coronavirus were reported on board, and Mr and Mrs Abel were attempting to get the word out about life on the ship and the virus itself.

Mr Abel said on Facebook: “There is going to be a time of quiet.

“We have been proved positive and leaving for hospital soon. Blessings all.”

However, he later added: “Frankly i think this is a setup! We are NOT being taken to a hospital but a hostel. That’s where partners are sent waiting out there quarantine.

“No phone, no wi-fi and no medical facilities. I really am smelling a very big rat here! Waiting for the transfer now..”

Indian business leaders have demanded cuts in import duties on drugs, mobile parts and other items because of the disruption caused by the coronavirus.

The coronavirus outbreak has hit India’s manufacutring market hard, and has had knock-on effects for its exports of medicine, electronic goods, textiles and chemicals.

This is because China is the biggest source of intermediate goods, worth $ 30 billion a year according to the Confederation of Indian Industries.

CII said: “The government should remove higher import duties on certain products, primarily imported from China” but available in other countries.

It added the government may offer credit with a backstop facility of guarantee for those companies with the capability to start immediate production of items which can feed into domestic production.

He said: “The prices of some antibiotics, vitamins and other medicines have gone up by 15-50% following fear of disruption in supply of ingredients.”

The technology company, Apple, has cut its revenue forecast because of the impact of coronavirus on its Chinese supply chain.

Apple has previously said it expects to report net sales of between $ 63 billion and $ 67 billion in the three months ending this June.

This was a wider range than usual, and the company blamed “uncertainty” surrounding the virus.

But the company recently announced in a letter to investors it would miss those targets because the disease had negatively affected the supply of new iPhones.

It was also forced to shut down factories and close high street shops in the wake of the outbreak.

8.55am update: Chinese citizen lashes out at Government over handling of coronavirus

A Chinese citizen has released an impassioned video, pleading to the outside world to listen to her experiences of the coronavirus outbreak.

The woman says: “I know when I speak up, I am in danger, but I cannot tolerate this any longer!”

In the video, she reveals all residents in her community are now in hospitals, with no beds and medicines available.

She said: “My parents are at home waiting for death, no one cares about the lives of ordinary people, you can’t buy medicine even if you have money.”

The woman also hit out at the official television channel of the Chinese government for what she described as “propaganda” concerning the virus.

8.40am update: Son of infected British couple slams the UK for lack of “communication”

Steve Abel, the son of David and Sally Abel, who are being held on the Diamond Princess cruise ship off the coast of Yokohama has said his parents are “not getting any communication” from the UK.

He told BBC Breakfast: “They are very high-spirited people.

“There are cracks in the armour and they are getting down.

“My mum breaks down in tears frequently, my dad is short-tempered.

“They are not getting any communication from our country, so they are in the dark and feeling very unloved.

On Monday, the Japanese Health Ministry confirmed 99 more people on the Diamond Princess had been diagnosed with the illness, bringing the total to 454.

The new French health minister, Olivier Veran, has warned there is a “credible risk” China’s coronavirus outbreak could turn into a pandemic.

He told France Info radio: “This is both a working assumption and a credible risk.”

The minister added the French health system was well-equipped and robust enough to deal with the virus efficiently.

Four patients who tested positive for the virus in France remain in hospital undergoing treatment.

The World Health Organisation descibes a pandemic as the “worldwide spread of a new disease”.

The head of the WHO’s emergencies programme, Dr Mike Ryan, was asked whether the outbreak of the disease was a pandemic.

He said: “The real issue is whether we are seeing efficient community transmission outside of China and at the present time we are not observing that.”

The Foreign Office has said it is “working to organise” a flight back to the UK for British nationals “as soon as possible”.

A statement explained: “Our staff are contacting British nationals on board to make the necessary arrangements.

“We urge all those who have not yet responded to get in touch immediately.”

A Downing Street spokesman also said those on board the ship docked near Yokohama, Japan, were being contacted about the possibility of a repatriation flight.

8.05am update: Senior Wuhan doctor dies after being infected with the coronavirus

A senior doctor in Wuhan has been confirmed dead after contracting the deadly coronavirus.

The announcement said: “Liu Zhiming, the director of Wuhan Wuchang hospital, died at 10.30am this morning after resuscitation efforts failed.”

This is the latest death in the medical profession as a result of the deadly disease.

It was confirmed today that last week, Xu Depu, the former director of the Ezhou city Chinese medical hospital in Hubei province had also died from the virus.

And the doctor who first blew the whistle on the virus, Li Wenliang, was also confirmed to have died.