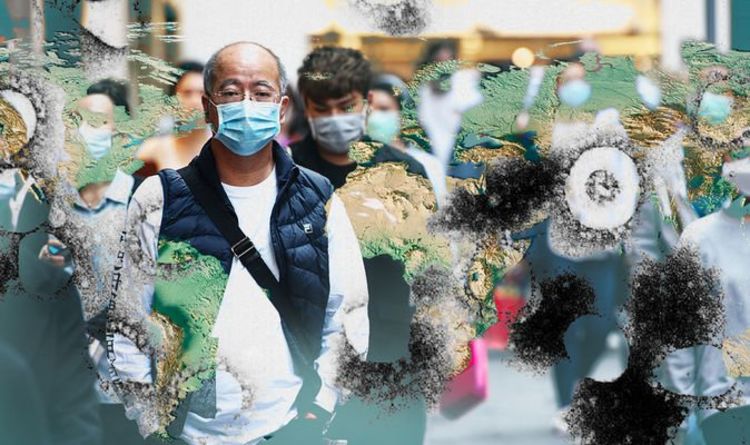 The Coronavirus has already killed more than 2,400 people in China and continues to endanger the lives of thousands of others globally. The World Health Organisation has confirmed the virus has spread to 26 countries and territories outside China.

South Korea, which is located 963 miles (1550km) from the centre of the outbreak in the Hubei Province, has reported a fourth death and 123 new cases – bringing its total number of people infected to 556.

Cases in Italy, Europe’s worst hit country, more than quadrupled to 79 on Saturday, with two deaths.

In Iran, 10 more people were diagnosed with the deadly virus, taking the number of people infected to 29 – with six deaths.

Ian Mackay, virus expert at Australia’s University of Queensland, warned a global “pandemic” is on the way as the number of hotspots increases.

He said: “A number of spot fires, occurring around the world is a sign that things are ticking along.

“What we are going to have here is probably a pandemic.”

Dr Amesh Adalja, Johns Hopkins Center for Health Security in the US, said as the virus is being spread by mild symptoms, current methods of treatment are not going to work.

He said: “If that’s the case, all of these containment methods are not going to work.

“It’s likely mixed in the cold and flu season all over the place, in multiple countries and gone unnoticed until someone gets severely ill.”

the potential spread of coronavirus.

Police in Birmingham have launched a man-hunt after a woman was left unconscious trying to defend her Chinese friend from being racially abused.

Meera Solanki, from Solihull, was out celebrating her 29th birthday with friends on February 9, when her friend was allegedly told to “take your coronavirus back home”.

A West Midlands Police spokeswoman said: “We’re investigating after a woman was assaulted after another was racially abused in Frederick Street, Hockley, around 2am on Sunday February 9.

“A man made racist marks to one woman and after he was asked to stop he punched another female, in her 20s, in the face.

“She was temporarily knocked unconscious but escaped without serious injury.

“The attacker is described as Asian, 5ft 8ins tall, of large build and was wearing a flat cap and hoodie at the time.”

The Coronavirus pandemic has taken another turn after it was revealed a Chinese pensioner took 27 days to show any symptoms, sparking concerns the 14-day quarantine could be too short.

The 70-year-old man was infected with the virus in China’s Hubei province but took nearly four weeks to show any signs of the virus, the local government said.

According to the Hubei government website, he had driven to Shennongjia, north-western Hubei, from eastern Ezhou, where he had close contact with his coronavirus infected sister on January 24.

The pensioner, identified as Jiang, then developed a fever on February 20 and tested positive for coronavirus a day later.

1.30pm update: China fears Coronavirus will have ‘big impact’ on the economy

Chinese President Xi Jinping has warned the outbreak of the Coronavirus could have a “big impact” on the economy in China.

He said: “At present, the epidemic situation is still severe and complex, and prevention and control work is in the most difficult and critical stage.

“The outbreak of novel coronavirus pneumonia will inevitably have a relatively big impact on the economy and society.”

Patients in China are being put into quarantine for a further 14-days after they have been cured of the virus, after some people tested positive for the disease again.

From Saturday all patients who have recovered will face a fortnight of medical observation.

Zhao Jianping, a doctor heading a team working in Hubei, said the reoccurrence of the virus in a number of patients is “dangerous”.

He added said: “Where do you put those patients? You cannot send them home, because they might infect others, but you cannot put them in hospital because resources are stretched.”

Health Secretary Matt Hancock has said the 118 people released earlier today from a quarantine facility in Milton Keynes “pose no risk to the public”.

He said: “All 118 are in good health and pose no risk to the public – and this is thanks to the dedicated team of healthcare professionals and other staff who have worked round the clock to keep each and every one of them safe and supported.

“I’m incredibly proud that once again our NHS and public health teams – including at Milton Keynes Hospital and Milton Keynes Council – have gone the extra mile to deal with this situation.”

Chinese President Xi Jinping has declared the Coronavirus is the China’s “biggest health emergency” after the death toll surpassed 2,400.

A third passenger has died onboard the coronavirus-infected Diamond Princess cruise ship in Japan.

Health officials confirmed latest death was a man in his 80s.

Chinese health authorities has confirmed the number of deaths as a result of the Coronavirus has risen by 97 to 2,442.

More than 100 people who were placed in a quarantine facility in Milton Keynes are being released, NHS England has confirmed.

118 guests had been put in quarantine for the past 14-days at the Kents Hill Park training and conference centre.

The group, who were brought back to Britain earlier this month on a repatriation flight from Wuhan, included around 10 children and a family of four.

French Health Minister Olivier Veran has said the country is “getting ready” for an epidemic after admitting it is “very likely” more cases of the deadly disease will be diagnosed.

He said: “Today, there is only one infected patent in France, who is hospitalised in Lyon.

“His health condition is not worrying.

“All the others, apart from an 80-year old man who died, were released cured and are not contagious

“Other cases, it is very likely. An epidemic? We are getting ready for it.”

South Korea’s president has said he was putting the country on “red alert” due to the rapid rise in new cases on the Coronavirus.

Bystaronline@reachplc.com (Tiffany Lo) An opinionated dog has left his owner in stitches when he interrupted her music practice with howling. The hilarious moment was captured on...
Read more