Coronavirus: London is the city most at risk of deadly... 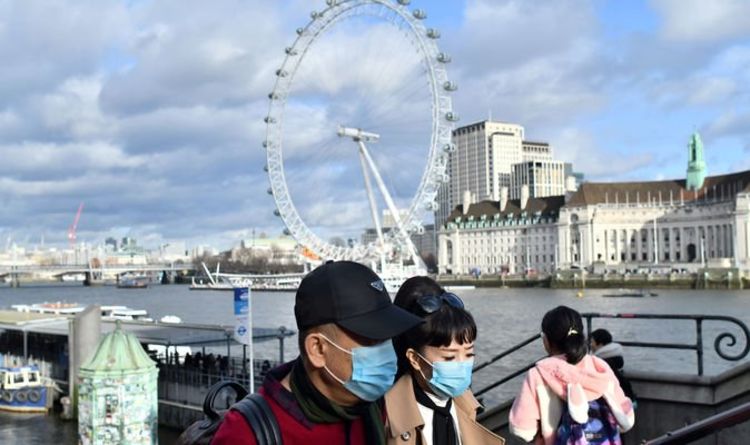 The stats were compiled by the University of Southampton, who are researching those most at risk of being struck down with the deadly virus. Researchers looked at the Chinese cities most at risk of having people infected with the virus, and then tracked movement of people across the country and the globe. Professors studied the movement of people historically and then stretched out the data to track travel patterns.

Figures showed a staggering 142,000 people travelled from high-risk cities in China to London in the three months surrounding the Lunar New Year in 2018.

China is currently celebrating Lunar New Year, although it has had to drastically cut down on celebrations because of the epidemic.

The number of people flying to London in that period was greater than any other European city.

Researchers admit travel is unlikely to be the same this year, but the fact the virus could soon spread to what is often considered as one of the cultural capitals of the world has heightened fears.

Professor Andrew Tatem from the University of Southampton said: “It’s vital that we understand patterns of population movement, both within China and globally, in order to assess how this new virus might spread – domestically and internationally.

“By mapping these trends and identifying high-risk areas, we can help inform public health interventions, such as screenings and health-care preparedness.”

Data released on London comes in the wake of hundreds of Brits stranded in Wuhan pleading with the government to be rescued and flown back home.

The Foreign Office has said only British nationals can travel on a planned evacuation plane from Wuhan.

But even this has been thrown into chaos, as it did not take off when planned because of China-UK diplomatic arguments.

This makes heart-wrenching decisions ever more impending for families of dual nationality.

One man, Jeff Siddle, has been forced to confront the idea he and his nine-year-old daughter could be flying back to the UK without his Chinese wife.

The Foreign Office said: “We are doing everything we can to get British people in Wuhan safely back to the UK…

“…We continue working urgently to organise a flight to the UK as soon as possible.

“We remain in close contact with the Chinese authorities and conversations are ongoing at all levels.”