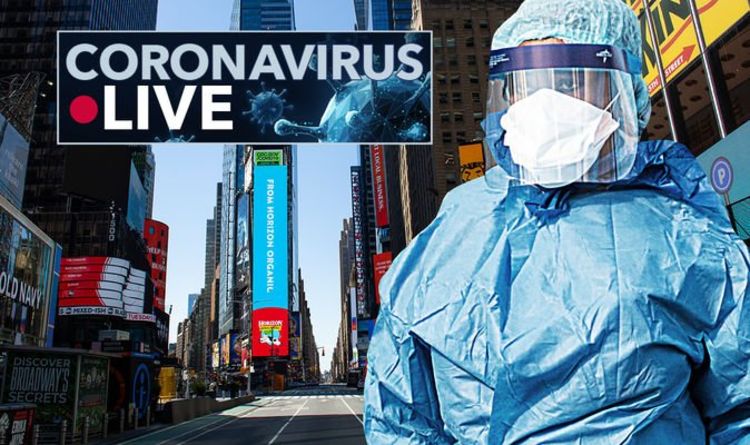 A team from the Ministry of Defence (MoD), including members of the Army’s 77th Brigade, is working closely with Cabinet Ministers in the fight against coronavirus lies, one military website has said. Boris Johnson is expected to announce an extension to the lockdown when he reviews the measures on Thursday. Labour leader Sir Keir Starmer has said he will support the Prime Minister’s decision to extend the lockdown despite growing pressure from the public to at least partially lift the rules.

Messages posted on HM Armed Forces Review’s Twitter account on Tuesday morning read: “A team from the Ministry of Defence, including members of the Army’s 77th Brigade, is currently supporting the UK Government’s Rapid Response Unit in the Cabinet Office and are working to counter dis/misinformation about COVID-19.

“Additionally, 77th Brigade planners, including from the Brigade’s Engineer and Logistic Staff Corps, have also deployed as part of Defence’s wider support to the Government’s response to this national emergency.”

The team is part of the MoD’s COVID Support Force effort aims to stop the spread of fake news online and put a halt to the phishing scams targeting people during the epidemic.

Two experts from the Army have joined a NATO team working to combat the large number of lies being spouted online about COVID-19.

Social media platforms have come under pressure to stop the spread of falsehoods about the virus and on Sunday YouTube announced it had deleted David Icke’s channel after he linked COVID-19 to 5G.

Sir Keir released a statement before his meeting with Mr Johnson to discuss the coronavirus response and how best to deal with the crisis going forward.

He said Labour’s priority is to protect the public’s health and save lives and therefore they party supported the strict lockdown.

He warned people yearning to return to normal life not to expect a sudden lifting of the lockdown.

“Our priority is protecting the public’s health and saving lives,” he said.

“That is why we supported the lockdown and again support the restrictions staying in place at this time.

“However, we need to be honest with the public about the challenges ahead.

“We are in this for the long haul.”

9.28am update: Lebanon set to extend coronavirus shutdown until May 24

Lebanon’s supreme defence council will advise the government to extend a shutdown to curb the spread of coronavirus by two weeks until May 24, a security source said after the council convened on Tuesday.

A decision is expected at a cabinet meeting later on Tuesday.

Lebanon has recorded 740 cases of the novel coronavirus and 25 deaths.

The government has started to ease some restrictions, this week allowing restaurants to open but at only 30 percent of their capacity.

8.45am update: Homecare support from Government has been slow, says Angel

Colin Angel, the policy director for the UK Homecare Association (UKHCA), has said support from the Government has been slow as additional cost pressures mount.

He told BBC Breakfast: “We’re seeing homecare providers having to use personal protective equipment that they’ve never needed before, and face masks and visors aren’t usually necessary in homecare.

“And now we’re using them for virtually every contact that we have with somebody.

“The prices are increasing, the amount of PPE needed to deliver care services safely has shot up in a month or so.

“So, all of these additional cost pressures need to be funded, and that’s either funded by the local authorities in the NHS who are buying care, or potentially by private individuals who are buying their own care.

“We don’t think that’s a cost which should be borne by private individuals.

“We think we need some real support from Government which has been very slow in appearing.”

He launched the app at Downing Street’s daily press conference on Monday.

He said a user’s phone will store anonymously the information about all the phones it has been within two metres of for more than 15 minutes in the previous few days.

He said one of the aspects being tested in the trial on the Isle of Wight is whether the best thing is for someone who gets a message saying they have been in contact with someone with symptoms should self-isolate “in case you develop the symptoms”.

He told BBC Breakfast: “This is one of the reasons that we want to test it to ensure that we get the rules right around what we advise people to do as soon as the contact tracing pings you.”