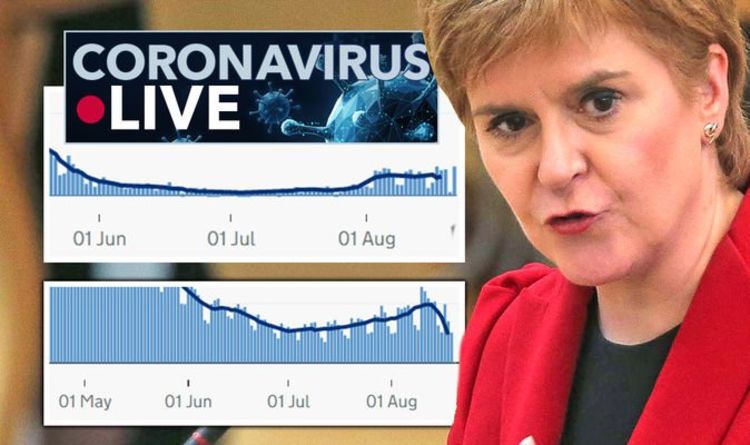 He said: “If we don’t follow the basic health advice to keep washing hands, to wear face coverings, to keep 2m apart where possible and to get tested when we have symptoms, we will face more tragedy in the weeks and months ahead.

“More people will fall seriously ill, there will be more deaths and our economy will face another hammer blow, when it needs all the support it can get.

“We are living with COVID-19 and it isn’t going away soon, so we urge everyone to keep doing their bit to keep themselves, and everyone else, safe.”

The leaders of the seven metropolitan councils across the West Midlands – Birmingham, Wolverhampton, Coventry, Dudley, Sandwell, Solihull and Walsall – have clubbed together to reiterate the importance of following the rules, including wearing face coverings in shops and keeping a safe distance from other households.

The officials have also urged the Government to ensure testing is widely available.

It comes after the number of people testing positive rose 27 percent in a week.

Dr Justin Varney, director of public health in Birmingham, has said the rise in cases has triggered national concern.

He said the next seven days will be crucial, and determine whether the are goes into lockdown or not.

8.58am update: Government reviewing whether to implement testing at airports

Grant Shapps has said the issue of whether testing for coronavirus could be implemented in airports is “under active review”.

He said: “We do review these things constantly and every month we review the month that we’re taking to quarantining, so these things are under active review.

“It’s just that I don’t want to sort of bottle false hope by saying it’s just as simple as test at the airport … I often hear this: ‘Why you don’t you just test at the airport, be done with it?’ The answer is because it won’t tell you what you need to know.”

8.33am update: Spain and France quarantine restrictions unlikely to be lifted soon

Transport Secretary Grant Shapps has said it is unlikely that Spain and France will be re-added to the Government’s travel corridor list anytime soon.

He told LBC radio: “At the moment I’m afraid France and Spain have both been going the wrong way.

“So just to put numbers on this, we respond when there are about 20 cases per 100,000 of the population measured over a seven-day rolling average. So 20 is the figure to bear in mind.”

He added: “I think that the last that I saw of Spain it was up in the 40s and 50s so a long way off that, and France, who… quarantined from last weekend, I’m afraid to say we were right to do that because we’ve seen the cases continue to carry on up in France as well.

“And in order to put a country back in to the travel corridor, what we say is it needs to stay below that number for a couple of cycles. So a cycle is two weeks long for coronavirus.”

Public debt has topped £2trillion for the first time on record as spending soared in response to the coronavirus pandemic.

The figure at the end of July was up by £227.6billion compared to the same month last year, according to the Office for National Statistics.

Borrowing had also risen to a record £150.5billion in the current financial year, £128.4billion more than between April and July last year.

7.53am update: 6million fall behind on household bills

As many as 6million in the UK have fallen behind on household bills due to the coronavirus pandemic, according to Citizens Advice.

One in nine people have reported being unable to keep up with household bills – the equivalent of six million individuals across the UK, according to research by the charity.

The survey revealed that one in four people, who are parents or carers, have fallen behind on their household bills as well as one in five key workers.

Of the six million struggling to pay the bills, one in 10 have been unable to afford food and one in five have sold possessions to make ends meet.

Knife crime in London has risen to record levels causing Government Minister for Crime & Policing, Kit Malthouse to hit out at the Mayor...
Read more
U.K.

Local lockdowns have been implemented in some parts of the country, with further restrictions estimated to have already been placed on around 10 million...
Read more
U.K.

In a statement released today, he revealed new measures may soon be required to contain the outbreak. He said: "The Prime Minister has said...
Read more
U.K.

The new restrictions will come into force on Tuesday in Merseyside, Warrington, Halton, and Lancashire, excluding Blackpool and Greater Manchester. Residents must not socialise...
Read more
U.K.

Joe Biden 'poised to side with Nicola Sturgeon on Scottish independence'

Ahead of Scotland's referendum, Mr Biden, the Democrat Party’s candidate to be the next US President, was about to publicly state where he stood...
Read more
U.K.

And neuroscientist Professor Karl Friston has said it is now time to move away from remote call centres and instead rely on local expertise...
Read more