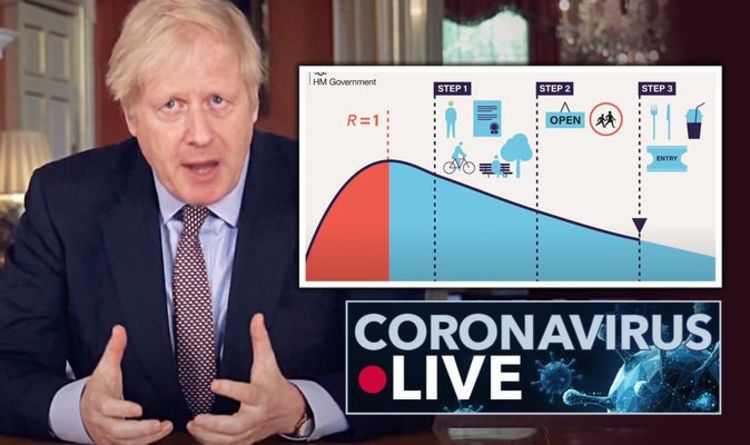 The Prime Minister is set to announce this evening that the Government is proposing to allow those that cannot work from home to return to work, but they must abide by strict social distancing rules.

There will also be a new warning system akin to that used for the terrorist threat, level one being green will represent the lowest risk of the virus to the nation, with level five, being red, representing the country is at the highest risk.

The Joint Bio-Security Centre has said the UK may move from five, the highest risk, to three next week.

Despite announcing the alert – the new system from the Prime Minister has come under scrutiny for not delivering a clear message.

It comes as the Prime Minister is set to make an announcement at 7pm on Sunday on the UK’s next steps.

9.40 am update: Around 40 percent of people on people on the Isle of Wight are using the NHS app in a pilot scheme.

Robert Jenrick, Secretary of State for Housing said that about 50,000 people have downloaded the app in one week.

However, he did not say how many people had been hired to do contact tracing. The government is attempting to meet an 18,000 target.

Former US president Barack Obama called the US response to the coronavirus pandemic a “chaotic disaster” in a private conference call.

Obama has largely observed an unwritten rule of US presidents not criticising their successors, but he has occasionally spoken out against President Trump, as have a number of other former presidents.

“It would have been bad even with the best of government,” Obama was quoted as saying on the call.

A cluster of new coronavirus cases in South Korea has forced the closure of bars and clubs across its capital city, amid fears of a second wave of infections as the country cautiously emerges from lockdown.

South Korea reported 34 new cases of Covid-19 on Sunday, the biggest daily rise in a month, bringing the total number of infections to 10,874.

7.40 am update: Billionaire Tesla boss Elon Musk has said he will move the electric carmaker’s headquarters out of California because of lockdown.

This comes after he was ordered to keep its only US vehicle plant closed.

“Tesla will now move its HQ and future programs to Texas/Nevada immediately,” the CEO tweeted.

The company was filing a lawsuit against Alameda County, he added.