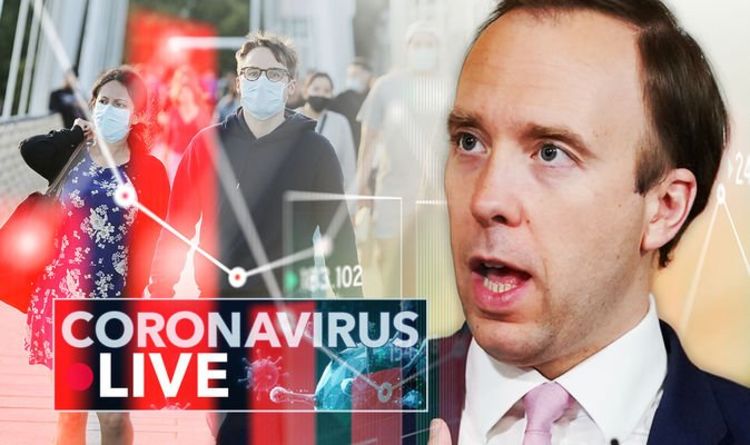 The memo said: “This is described by the prime minister as our only hope for avoiding a second national lockdown before a vaccine, something the country cannot afford.”

Speaking at a Downing Street briefing on Wednesday, the Prime Minister said he hoped “we could be able to get some aspects of our lives back to normal by Christmas” and pointed to mass testing as something which could help society open back up further.

For now, however, Mr Johnson has urged people to limit their social contact “as much as possible” as he confirmed that social gatherings of more than six people will be outlawed in England from Monday.

9.01am update: Risk of dying from COVID-19 doubles every six years

Professor Sir David Spiegelhalter, a statistician at the University of Cambridge, said the risk of dying from coronavirus “doubles every six years”.

“A 20-year-old has double the risk of a 14-year-old, he told BBC Radio 4’s Today programme, adding: “It’s like a horrible form of compound interest.”

“The real danger points, in a sense, are intergenerational meetings. At the moment, the people who are getting the virus are the 20-29s – if 5,000 get it, there may be one death if you’re unlucky, there will be other sort of long-term conditions as well.

“So it shows the crucial care is where the generations meet, and I think what this shows is that, for the young, anyone over 55 should be treated with caution, respect, in terms of masks and the distance and so on.”

Russia reported 5,363 new coronavirus cases on Thursday, bringing the national tally to 1,046,370, the fourth largest in the world.

Authorities said 128 people had died in the last 24 hours, pushing the official death toll to 18,263.

Grant Shapps admitted that there is “some pressure” on the testing system at the moment.

Asked about why there is talk of ambitious targets for the future when there are immediate problems, he told BBC Breakfast: “There are pressures on testing right now, even though we can perform 300,000 a day.

“Now we’re going to bring that up to half a million tests per day.”

He said two new test centres will be opened. Mr Shapps said the UK is doing more tests than France, Italy, Germany and other places.

He said the reason there are pressures on the system is due to schools and universities returning.

Nicola Sturgeon is to reveal if Scotland will reduce the number of people who can meet in groups as part of efforts to curb the spread of coronavirus.

The First Minister will formally announce the latest review of lockdown restrictions north of the border to the Scottish Parliament on Thursday.

With Prime Minister Boris Johnson having announced that people in England “must not meet socially in groups of more than six” from Monday, with cases of Covid-19 currently rising in Scotland, Ms Sturgeon had already warned that her latest review is “likely to take a very cautious approach”.

Speaking on Wednesday, she said: “We can’t rule out the need to make changes to the number of people allowed to gather together like those that were announced for England.

“We’re carefully reviewing existing guidance and regulation, as well as considering what new steps may be necessary to keep Covid under control.”

Speaking to Sky News, he said the Government had chosen six as the limit on gatherings because it is “a pragmatic number”.

“Six is a pragmatic number because it is the foundation of a number that people will recognise – we’ve had this rule of six in a slightly different form before.

“What we are now saying is ‘it is six in every circumstance – indoors, outdoors, in a pub or restaurant, it is always the rule of six.”

Local lockdowns cannot be ruled out in French regions where COVID-19 infections are flaring up even though authorities are striving to avoid it, a government advisor has said.

Professor Jean-Francois Delfraissy, who heads the scientific council that advises the government on the epidemic, told RTL radio: “We must do everything we can to avoid local lockdown. In these risk regions we could look into further restrictions of big gatherings of crowds.”

He said the situation in about 20 large cities, including Marseille, Bordeaux and the Paris region, was being watched closely.

French health authorities reported 8,577 new confirmed coronavirus cases on Wednesday, the second-highest number of daily additional infections since the disease started to spread in the country at the end of the winter.

Lottery winner Chloe Webster won't be in a huge rush to return home from her holiday in Greece after learning of her jackpot. The 29-year-old...
Read more
U.K.

London lockdown: UK capital could be shut down by TOMORROW amid emergency top-level talks

The columnist accused Radio 4’s flagship Today programme of preaching to listeners. “The BBC has decided to be a secular church and it preaches and...
Read more
U.K.

Sir Keir has overseen the Labour Party’s rapid revival in the polls after the disastrous 2019 general election. He has tried to learn lessons from...
Read more
U.K.

The Chancellor is also said to be considering a public sector pay freeze, though NHS workers may be exempt, and a freeze on benefits. Britain’s...
Read more
U.K.

The Prime Minister is understood to be looking at bringing in new restrictions over the Winter as cases of the invisible killer disease continue...
Read more