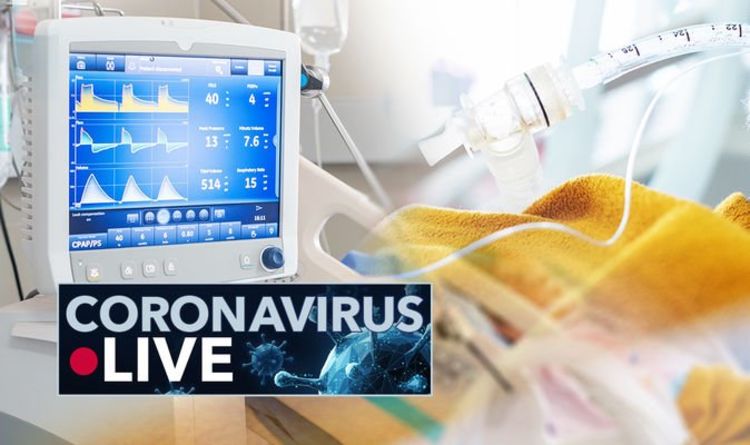 But the results, published in The New England Journal of Medicine, found among the 1,215 people with an infection confirmed by a gold-standard PCR laboratory test, 91 percent had antibody levels that rose during the first two months after diagnosis and then plateaued.

Scientists said it gives hope that “immunity to this unpredictable and highly contagious virus may not be fleeting”.

Researchers found about 1 percent of the population had been infected and of that group, 56 percent had received a confirmed diagnosis after a test.

Another 14 percent had not been formally diagnosed but had quarantined after exposure to the virus. In the remaining 30 percent, the antibody tests led to discovery of prior infection.

9.23am update: Boris accused of U-Turn

Boris Johnson has been accused of a fresh U-turn after declining to meet campaigners representing families bereaved during the coronavirus pandemic.

The Prime Minister said “of course I will meet the bereaved” when questioned last week in an interview about attempts by the Covid-19 Bereaved Families for Justice group to secure a meeting.

But the campaigners trying to secure a swift public inquiry into the Government’s handling of the crisis shared a letter from Mr Johnson in which he “regrettably” declined to meet with the group.

Campaign co-founder Jo Goodman, who lost her father Stuart to the virus, said: “It’s a U-turn followed by a U-turn.

“The Prime Minister has done a 360: dodging five letters, then agreeing on live TV to meet with us, and now quietly telling us he’s too busy. It’s heartless.”

Local lockdown restrictions have been lifted in parts of northern England despite a backlash from leaders in Greater Manchester, with Mayor Andy Burnham blasting the decision as “completely illogical”.

Greater Manchester Mayor Andy Burnham said the easing of coronavirus restrictions in Bolton and Trafford was “completely illogical”, and urged people to “continue to follow the guidance” not to have social gatherings in their home.

He told BBC Radio 4’s Today programme: “We find ourselves at a completely unsustainable position this morning – that’s the politest way I can put it.

“Overnight we’ve had restrictions released in two boroughs where we’ve got a rising number of cases – in one case in the red zone.

“And neighbouring boroughs are still under restrictions but with much lower numbers of cases.

“These restrictions were always hard to explain to the public but they are completely illogical now.”

8.19am update: England under pressure over quarantine rules

England is facing pressure to reconsider quarantine rules for Greece after Scotland and Wales introduced new measures over concerns about rising coronavirus cases.

The Scottish Government announced on Tuesday evening that travellers from Greece would have to self-isolate for 14 days from Thursday, while Wales also began asking arrivals from the island of Zante to begin the period of quarantine.

The Department for Transport (DfT) said no change to its rules for England had been made, but Wales’ health minister Vaughan Gething said he would be pressing the UK Government for an urgent meeting to consider the potential risk in Greece.

Greece’s tourism minister Harry Theoharis has said the country has “a much lower number of infections compared to most other countries in Europe”.

He told BBC Radio 4’s Today programme: “We’re actually in the right direction. We’re going down in terms of the average numbers.

“We’re taking specific targeted measures where we see specific concentrations of cases. Measures that have been successful and have been working in the past few days.

“So I think we’re doing everything in our power to ensure that every person that comes from the UK is kept safe in Greece.

“Of course everybody should also have some restraint, understand that this is a different summer. You mentioned it before, it’s not exactly the same like the past few years.

“We should all keep control of the situation, use our masks where it’s required, follow the rules etc in order to ensure that everybody is kept safe.”

The incident took place outside The Lair near the city centre. Police were called at around 8.50pm by a member of the public confirmed they...
Read more
U.K.

And the environmental pressure group has challenged the Government to use Brexit to take the steps necessary to protect the waters around the UK...
Read more
U.K.

As COVID-19 rules threaten Christmas, what will you miss? Answer and you could win £200

Express.co.uk is asking readers how they feel ahead of Christmas, not only about what they fear could be scrapped, but how they feel about...
Read more
U.K.

The London Mayor and the Prime Minister discussed the coronavirus situation in the capital. A spokesman for Mr Khan said: "Sadiq had a constructive...
Read more
U.K.

Mr Khan along with members of his security team saddled their electric bikes on their commute from Tooting to City Hall. The London Mayor and...
Read more