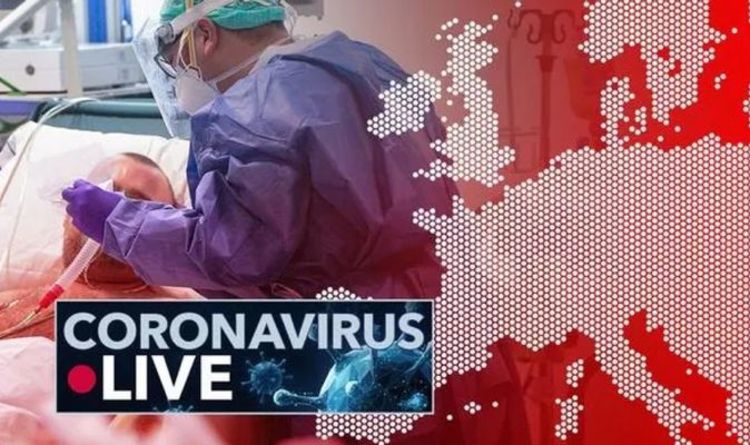 The figures are based on samples taken from blood donors in different parts of the UK.

Yvonne Doyle, Public Health England’s medical director, said earlier this week: “We reckon that, over the peak, we had in London about 16 percent of the population showing that they had antibodies.

“This is dropping off now, and it’s now much lower than that. Overall, between six and 10 per cent of the population are showing those kind of antibodies as we do our regular seroprevalence testing.”

It comes after a recent study showed that scientists managed to isolate antibodies from COVID-19 patients which are among the most potent in neutralising coronavirus.

It comes after a recent study showed that scientists managed to isolate antibodies from COVID-19 patients which are among the most potent in neutralising coronavirus.

The study showed that these antibodies could be produced in large quantities by pharmaceutical companies to treat patients, especially early in the course of infection.

They can also be used to prevent infection, particularly in the elderly, the scientists say.

The study, published in Nature, reports that researchers have confirmed the purified, strongly neutralising antibodies provide significant protection from SARS-CoV-2 infection in hamsters.

He said: “We now have a collection of antibodies that’s more potent and diverse compared to other antibodies that have been found so far, and they are ready to be developed into treatments.”

10:30am update: NO guarantee other countries will not be removed from safe list

Foreign Secretary Dominic Raab has said there is no guarantee other countries will not be removed from the Government’s “safe list”.

He told Sophy Ridge on Sunday: “As we’ve found with Spain, we can’t give a guarantee.

“All we can say is we’ve got this Joint Biosecurity Centre, we monitor the risk in real time, we take decisive swift action and so there is an element of uncertainty this summer if people go abroad.

“I’m not going to tell people what they should and shouldn’t do, they should follow the advice, I’m going to be staying at home this summer.”

9am update: Calls for regional air bridges to deal with Spain COVID-19 crisis

The government should adopt testing and regional air corridors instead of quarantining all holidaymakers returning from Spain, the group which represents the airline industry said.

Rob Griggs of Airlines UK told BBC Breakfast the announcement is a “big blow” to the aviation sector.

He said: “We back the idea of voluntary testing on arrival or before you leave, we think testing would enable perhaps countries where quarantine would still apply as a whole, to enable individuals to come back without the need for quarantine if they test.

“And that’s something that’s been trialled in various parts around the world now, but we also think it’s important to enable countries that are on the ‘go’ list, and people are able to fly, they will have the added reassurance that they would be able to take a test when they come back and not have to quarantine.

“For us the testing element is very important and the regional aspect, if the whole country isn’t necessarily affected in the same way, can we be a little bit more specific in whether restrictions apply.”

Consumer rights and travel groups have criticised the Government after it moved suddenly to re-impose quarantine restrictions on those returning from Spain.

Ministers announced on Saturday that holidaymakers who had not returned from Spain and its islands by midnight would be forced to quarantine for 14 days after COVID-19 second wave fears saw the European country struck off the UK’s safe list.

But questions have been asked about why the so-called “travel corridor” with the UK’s most popular holiday destination was suspended with little notice, with the sudden turn of events catching out even Transport Secretary Grant Shapps, who is currently in Spain for his summer break.

Mr Shapps, whose department formally announced the rule change, had to dial in from Spain to discuss altering the guidance with Health Secretary Matt Hancock and Cabinet Office minister Michael Gove.

Express.co.uk readers can vote in our poll on whether people in England should face an eye-watering £10,000 fine for failing to self-isolate. And let...
Read more
U.K.

Liverpool stabbing: Man dies after being stabbed in chest in horror knife attack

{authortext}Ministers are thought to be considering a two-week "circuit break" in a bid to slow transmission of the virus. The Prime Minister continues to...
Read more
U.K.

{authortext}Less than 48 hours after revealing that the UK is on the cusp of a second wave of coronavirus, Boris Johnson has unveiled his...
Read more
U.K.

{authortext}Express.co.uk readers can vote in our poll on whether they agree with another national lockdown. And let us know more about what you think...
Read more
U.K.

Coronavirus UK: Expert lashes out at second lockdown fears – 'You don't have the stamina!'

{authortext}Britain is likely to need to reintroduce some national coronavirus lockdown measures sooner rather than later, a former senior government health advisor has said....
Read more