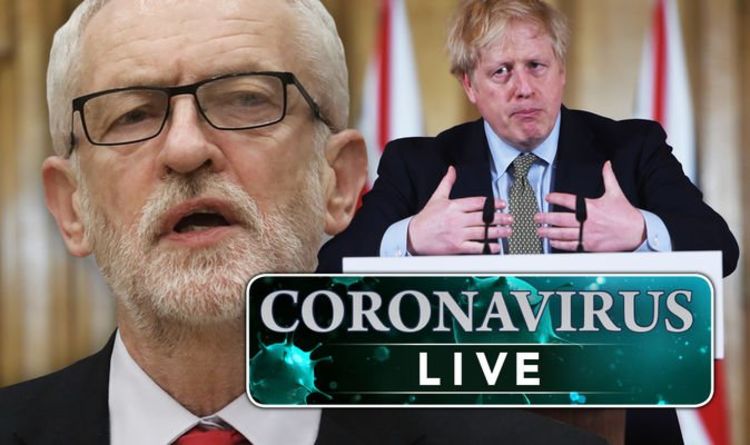 French Prime Minister Edouard Philippe used a live TV address to the nation to publicly reprimand Mr Johnson over his response to the Covid-19 crisis, which has killed 71 Britons and infected 1,950. France’s slapdown is the latest in a series of embarrassing episodes for the Prime Minister, who has drawn widespread criticism for his handling of the epidemic.

Last week the government was slammed by a group of UK scientists who argued the containment measures implemented were “insufficient” in the fight against the disease and their lax approach was “risking lives”.

On Tuesday evening, hours after France’s nationwide lockdown came into effect, Mr Philippe delivered an update on the fast changing situation to his fellow countrymen and women with a warning for Britain.

He said: “Everyone within the European Union must adopt coherent methods and processes to fight the epidemic, as in Italy, France and Spain.

“‘It goes without saying that if neighbouring states such as the United Kingdom spend too long continuing to avoid these containment measures, then we would have difficulty accepting British nationals who would move freely in their own country and then come to our country.”

His tough words come as the UK is perceived to be behind the crowd of European nations when it comes to cracking the whip on social gatherings in the desperate fight to stop the spread of the virus.

Nations across the continent, many whom are not as badly affected as Britain, have closed schools, pubs, restaurants and banned mass gatherings.

Mr Johnson has resisted calls to send pupils and teachers home, arguing the strategy may not have a great impact on the rising number of cases, but has said such measures are on the table for future consideration.

French President Emmanuel Macron on Monday pledged to pump €300billion (£273billion) into “the war against coronavirus”.

Another newborn baby has tested positive for Covid-19 in the UK.

Health officials at the James Paget University Hospital in Gorleston, Norfolk, said a baby is among three new cases identified.

All patients are now being treated in isolation, the trust said on Wednesday.

A hospital spokesman said: “An extensive ‘contact tracing’ exercise is now under way by Public Health England to trace anyone who might have had close (face-to-face) contact.

“Close contacts will be given health advice about symptoms and what to do if they become unwell in the 14 days after they had contact with the confirmed case.”

That case came after a nine-month-old baby was diagnosed with coronavirus – despite neither parent feeling unwell.

9.31am update: Japan says not preparing for postponement of Olympic Games

Japan is not making any preparations to postpone the 2020 Summer Olympics, the government’s top spokesman said on Wednesday, stressing Tokyo’s resolve to host the event as scheduled despite the global spread of coronavirus.

Chief Cabinet Secretary Yoshihide Suga said the government would continue with preparations to hold the July 24-Aug. 9 Games as scheduled, working closely with organisations such as the International Olympic Committee (IOC).

He laid out the government’s plans in parliament.

“We’re not making any adjustments to postpone the Games,” he said.

His comments come amid mounting concerns about whether the Games can proceed as planned, with the rapidly spreading virus panicking financial markets and bringing business and social activity around the world to a standstill. Many sports events have been cancelled or postponed.

Japanese Prime Minister Shinzo Abe said on Tuesday that Group of Seven leaders had agreed to support a “complete” Olympics, but dodged questions about whether any of the leaders had brought up the possibility of postponement.

The IOC has remained committed to staging the Tokyo Games as planned, saying on Tuesday after a meeting with international sports federations that measures against the virus were delivering results.

A British professor who was in Downing Street this week after convincing Boris Johnson to stiffen his response to the coronavirus outbreak has self-isolated after developing a persistent dry cough and a fever.

Neil Ferguson, a professor of mathematical biology at Imperial College London, produced a projection of the coronavirus outbreak for the British government and was in Downing Street on Monday.

His quarantine has raised fears for the Prime Minister and his pregnant fiancée Carrie Symonds.

Prof Ferguson tweeted: “Sigh. Developed a slight dry but persistent cough yesterday and self-isolated even though I felt fine.

“Then developed high fever at 4am today. There is a lot of COVID-19 in Westminster.”

It was not immediately clear if Prof Ferguson had met Mr Johnson face to face although the professor attended the Prime Minister’s news conference.

In his study, Prof Ferguson compared the potential impact of the COVID-19 disease epidemic with the devastating flu outbreak of 1918 and said that with no mitigating measures at all, the outbreak could have caused more than half a million deaths in Britain and 2.2 million in the United States.

8.26am update: French rise in cases could slowdown within 8-12 days

France could hope to start seeing a slowdown of coronavirus infections in about eight to 12 days following the government’s decision to lock down the country, health minister Olivier Veran said on Wednesday.

“We will intervene where necessary to make sure people respect the confinement. When I look outside my window, I see that gradually people are getting the message,” Veran told LCI TV.

8.15am update: Public transport in West Midlands to be scaled back

The leader of Birmingham City Council, Ian Ward, has said public transport in the West Midlands will be rolled back as the coronavirus crisis worsens.

He warned the “extraordinary times” warranted special measures to ensure trains and busses are clean for passengers to safely travel on during the epidemic.

“It is clear that the West Midlands’ public transport network will not be able to operate at full capacity during the coronavirus outbreak – and nor is there demand for it to as the numbers using public transport are already beginning to fall,” he said.

“However, there are significant numbers of people across the region who continue to rely on public transport through this challenging period.

“These are extraordinary times, but I would like to thank all staff at TfWM (Transport for West Midlands), and of course those at operators such as West Midlands Trains and National Express, who are working round-the-clock to make sure safe, clean, and functioning public transport is available for those who need it the most.”

8.08am update: Poland to receive protective gear, tests from China to fight coronavirus

Poland will receive more than 10,000 test kits and tens of thousands of other protective items such as masks, goggles and shoe covers from China to help tackle the coronavirus outbreak, Poland’s Foreign Ministry said in a statement late on Wednesday.

“Even though the fight with coronavirus is ongoing in China, they decided to show solidarity with Poland and help our country by providing tests to uncover COVID-19, as well as protective medical gear,” the statement said.

China has already promised to export medical gear, such as masks and respirators, to countries like Italy and South Korea.

A number of European countries, such as Germany and France, said they would limit exports of certain medical products such as masks to avoid shortages at home as the coronavirus outbreak worsened this month.

China has reported nearly 81,000 infections and 3,237 deaths in the mainland from the coronavirus epidemic, which emerged late last year in the central Chinese city of Wuhan.